Right up until the snow starts to fall in December and the ground freezes up cold enough that we can’t display them anymore, you’ll find us trying fantastic pumpkin painting ideas all autumn long!

They’re our absolute favourite seasonal thing and we love getting as much done with them as we can before the season ends for another year. In fact, sometimes we even make pumpkin projects that we’ll keep indoors long into winter just so we can keep enjoying them to the bitter end. That’s why we actually prefer pumpkin painting to pumpkin carving! Leaving the pumpkin whole rather than cutting into it helps it last longer on display without wilting or rotting. 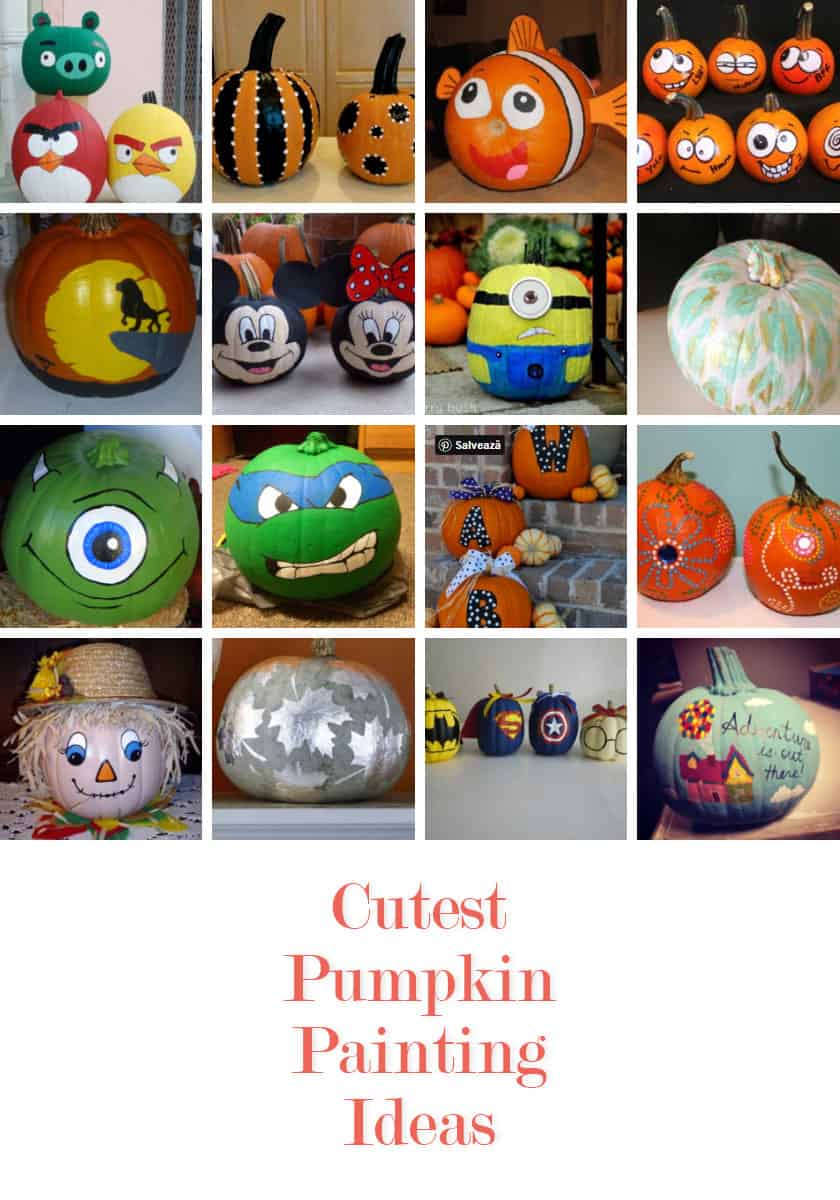 Just in case you’re as in love with pumpkin painting as we are, check out these 15 adorable pumpkin painting ideas that you can either recreate or use as inspiration to come up with your own pumpkin designs! 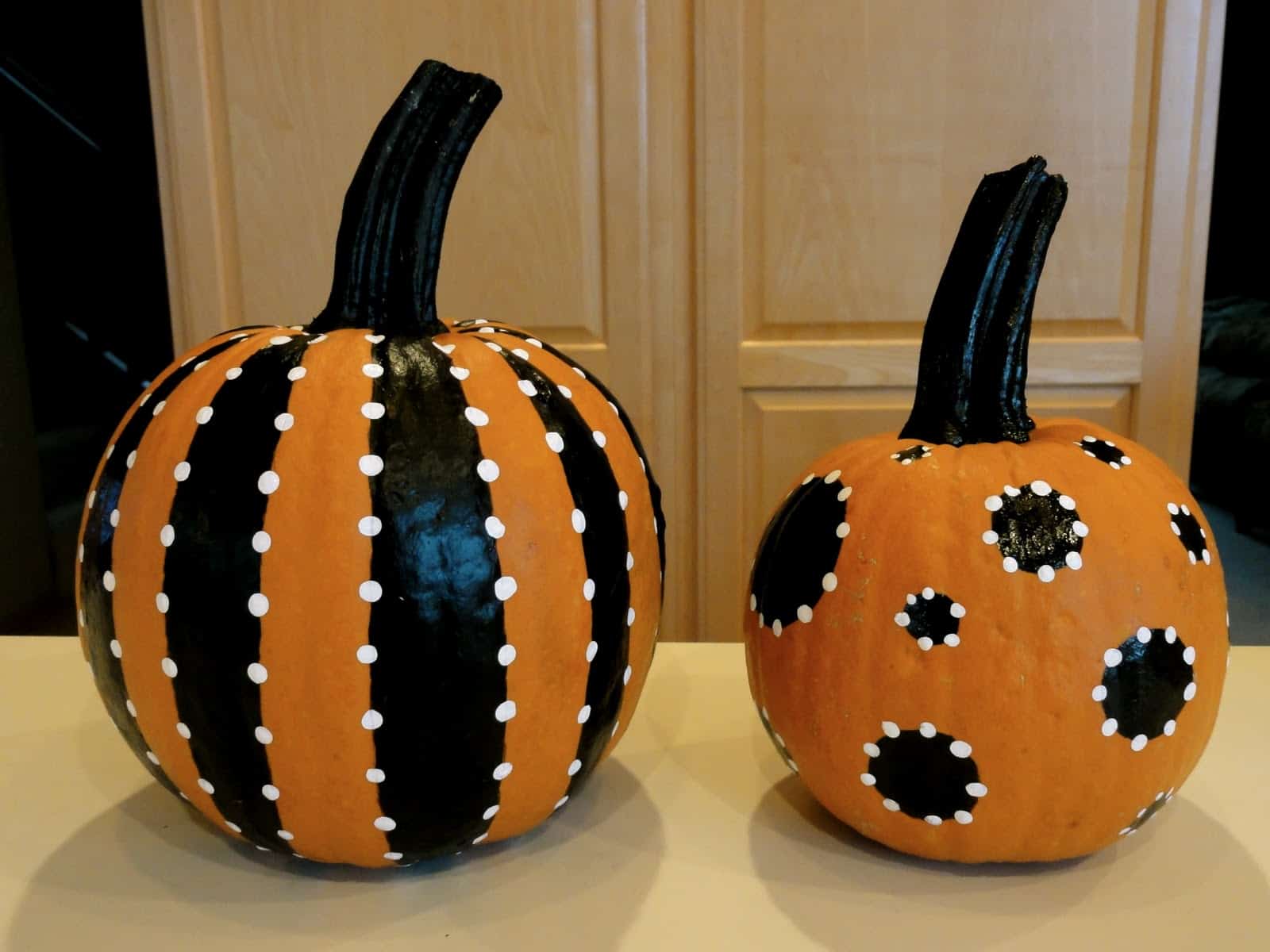 Halloween might be long over, but that doesn’t mean that we’ll shy completely away from orange and black colour combinations for the entire rest of the year. We actually find black paint on an orange pumpkin quite versatile for the whole season up until you start decorating for Christmas as long as there’s some white in there to visually break things up a little and give things some contrast. We love the way Birshykat painted little while polka dots around the edges of their stripes and circles to get just the effect we mean. 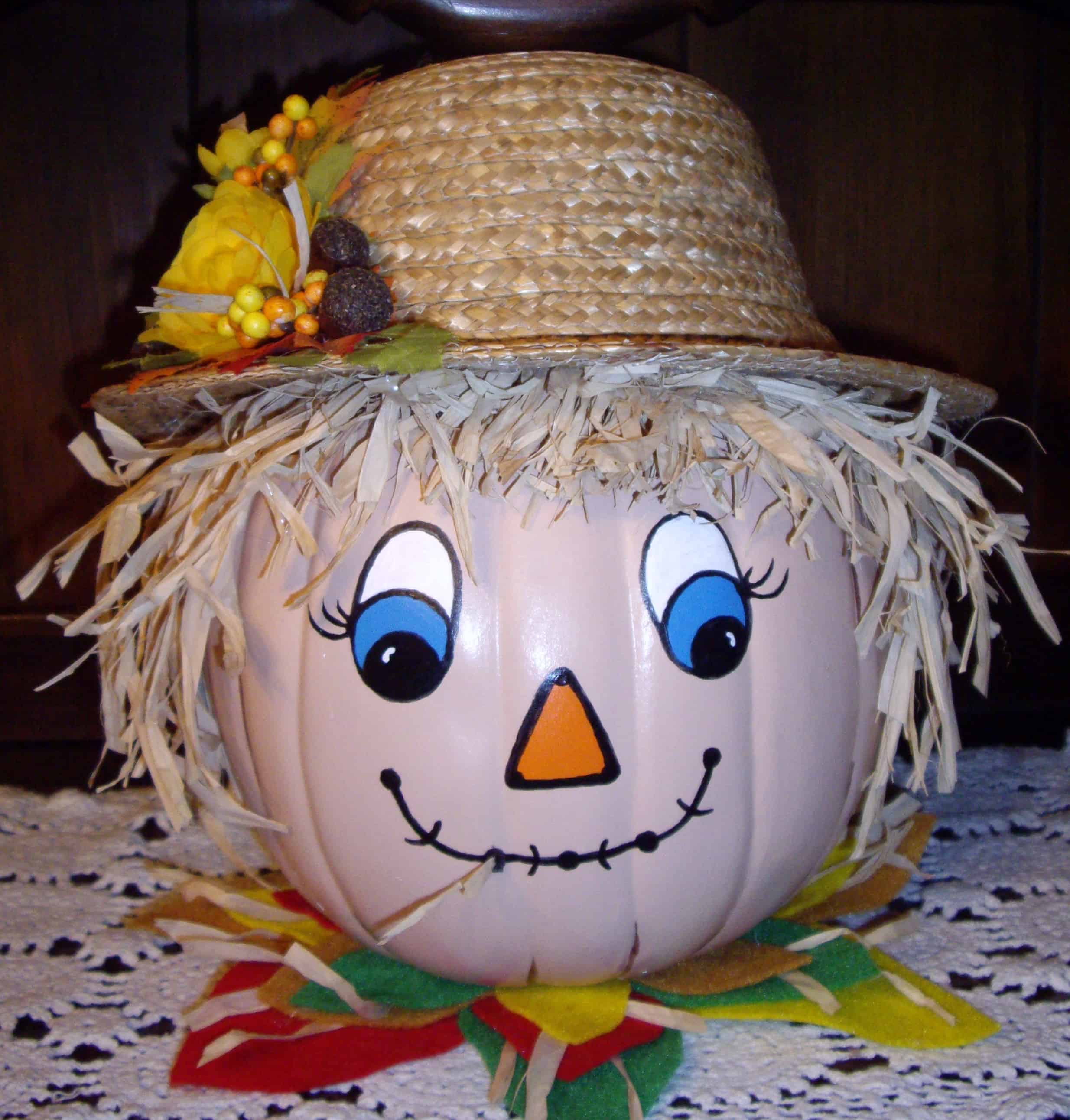 If you’re going to paint a pumpkin, are you looking for an idea that really lets you get creative with your paint? We love the idea of getting practice our hand painting and artistic skills in a seasonal way that’ll give us some bonus décor! In that case, we think you might find this fully painted scarecrow pumpkin idea from Pinterest a lot of fun. The bonus is that when you’re done, you get to decorate it with wicker, felt, and a hat too! 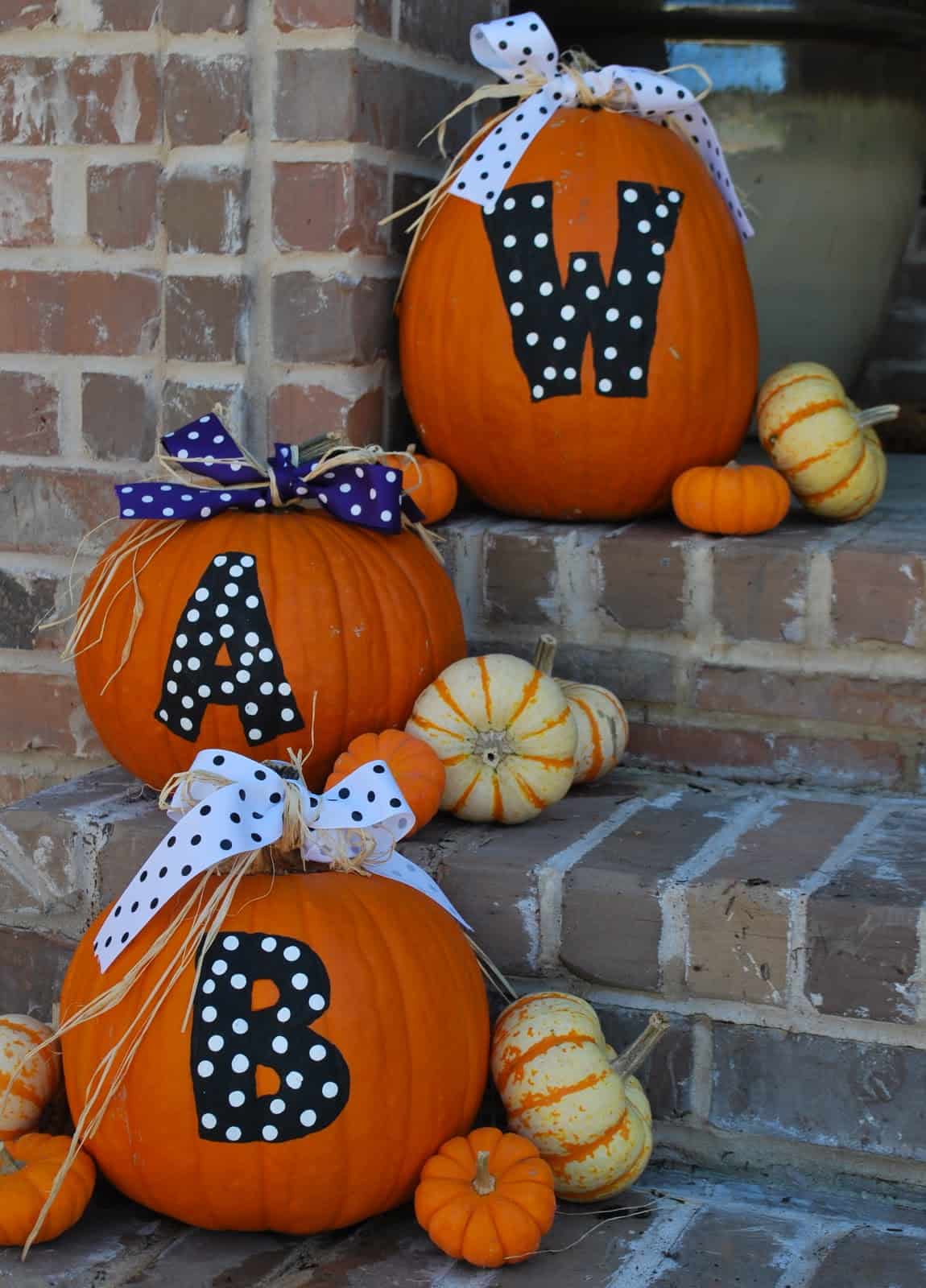 Did you like the idea of black and white colour schemes and polka dots in your painted design but you’d rather personalize your pumpkin a little bit rather than just featuring colour blocked shapes? Then we’d suggest taking a look at this cute painted monogram idea from Amanda Jane Brown! We like that this idea gives you free license to practice either working with stencils or perfecting your freehand lettering. 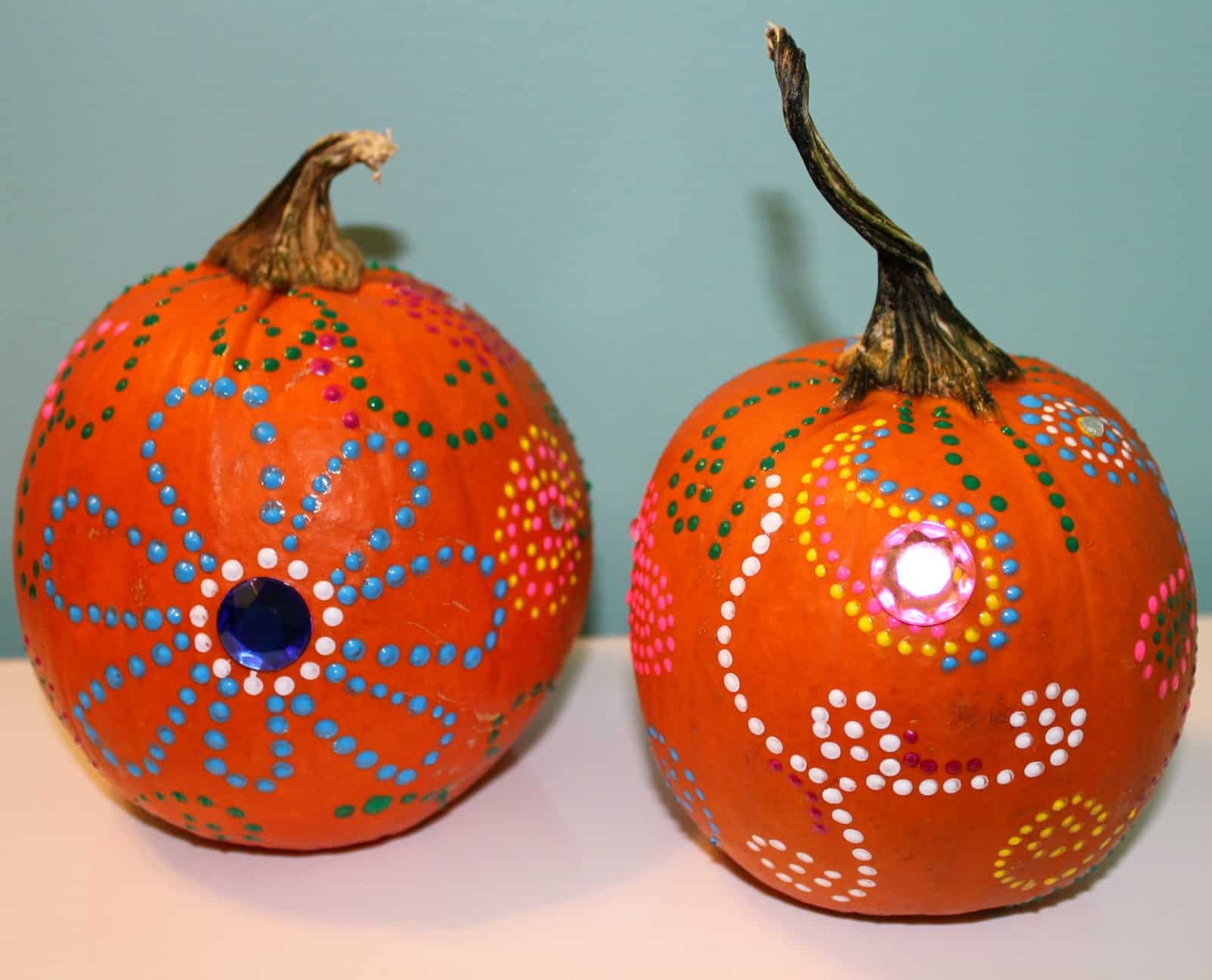 Are you still quite intrigued by the idea of polka dots and dotted patterns but you’d rather get a little more creative with your colours and designs than just blocked out shapes and black and white colour schemes? Then we have a feeling this polka dotted rainbow swirling idea from Many Makings will appeal to you a little more! We love the way they created freehand patterns with a dotting paintbrush technique and added big rhinestones in the middle for a little extra sparkle. 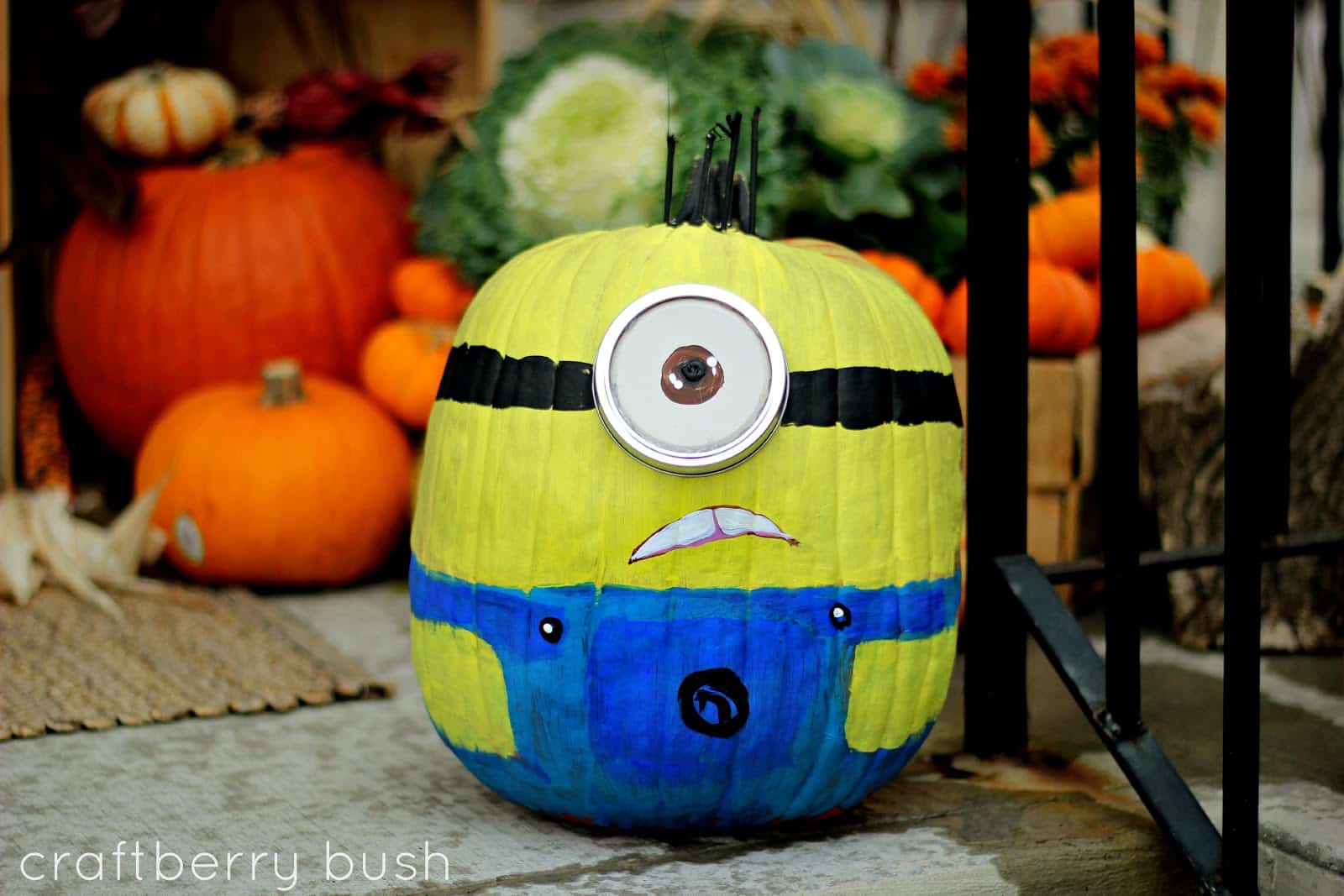 Are you intent on getting you kids in on the fun when it comes to this year’s pumpkin painting but you’re worried they won’t stay interested in the project if you just try to make them paint dots and letters? We think they might have more fun if you help them pick a movie or cartoon and recreate a character they love! We can’t get enough of how cute these funny Minions pumpkins from Craftberry Bush are, especially since pumpkins are the perfect shape for the way the little creatures are drawn. 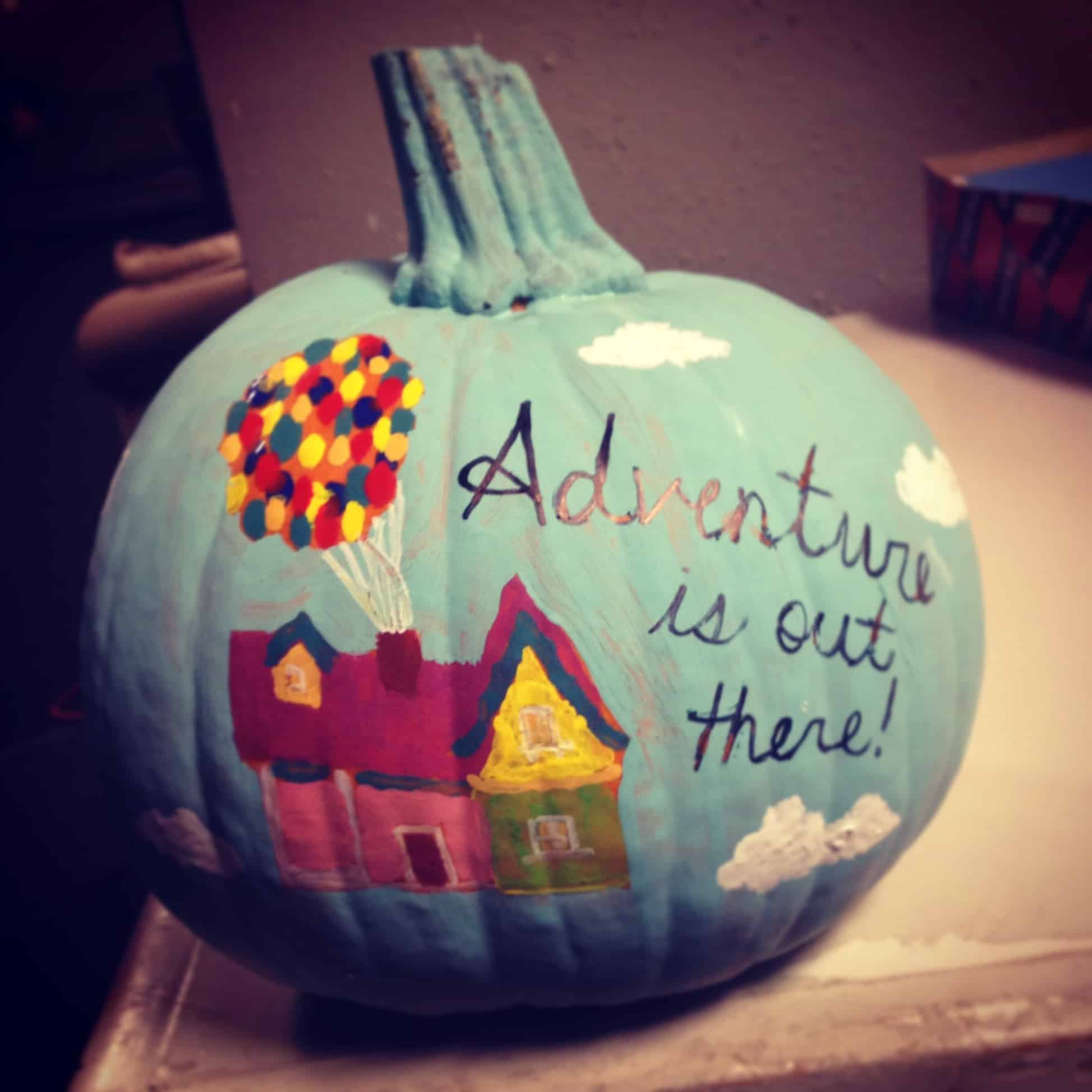 Are you very intrigued now by the idea of painting a pumpkin themed after a cartoon move favourite but you’re just not a huge Minions fan? Well, browsing the pumpkin painting posts on Pinterest will teach you pretty quickly that there are nearly no holds barred when it comes to the design possibilities you have when you’re painting pumpkins by hand! Check out this idea for making an Up! inspired pumpkin design, proving that you don’t have to do something explicitly fall themed to have fun with pumpkin painting. 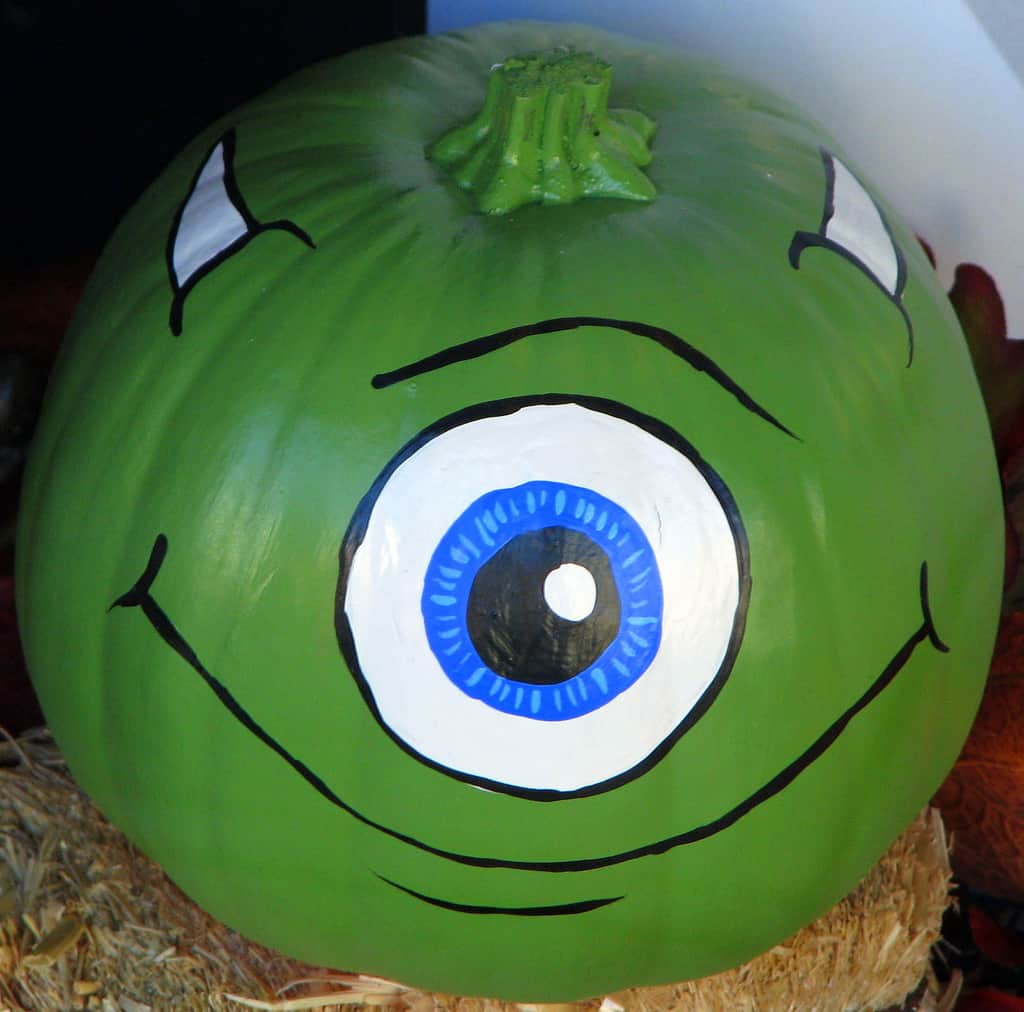 Just in case you’re still laughing over how much fun the idea of painting character pumpkins sounds but you’re not quite settled on any of the ideas we’ve shown you yet, here’s another adorable design from another classic kids’ movie! We can’t get enough of this cute Monsters Inc pumpkin design from New Jersey Family. It’s a great one to do with kids because you only need to make a few simple strokes by hand to make it look great, rather than being very detailed or artistically skilled. 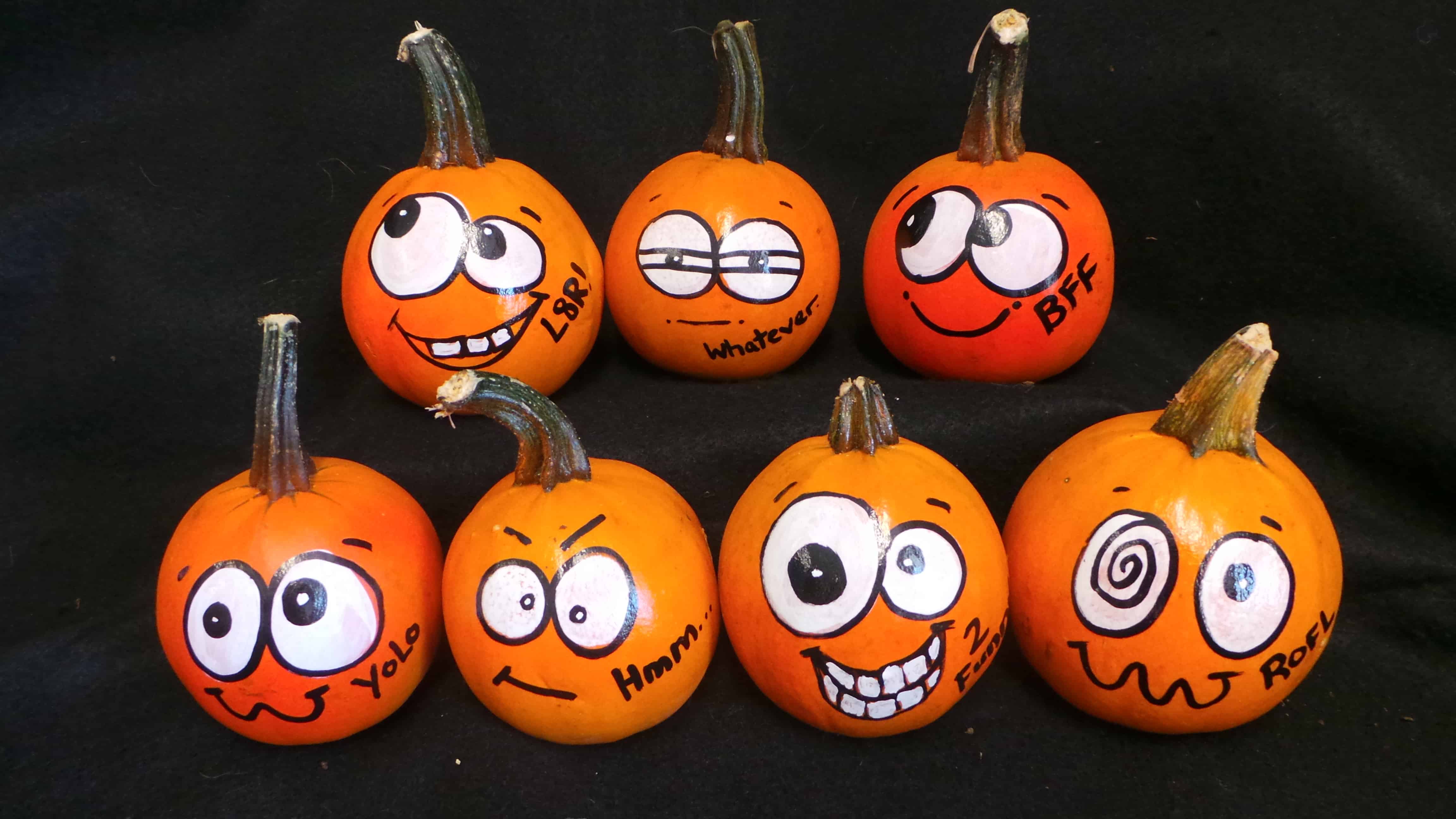 Perhaps you’re  ahuge fan of the cartoon pumpkin idea but you’d rather make your own little characters than copy or recreate ones that already exist in TV and film? Then we think you should check out these adorable funny-face pumpkins instead. We love the way Dan Schantz Farm used mini pumpkins and big, rounded eyes to make little characters with a wide range of emotions. They’ll look cute on your porch or your mantel no matter how few or how many you create. 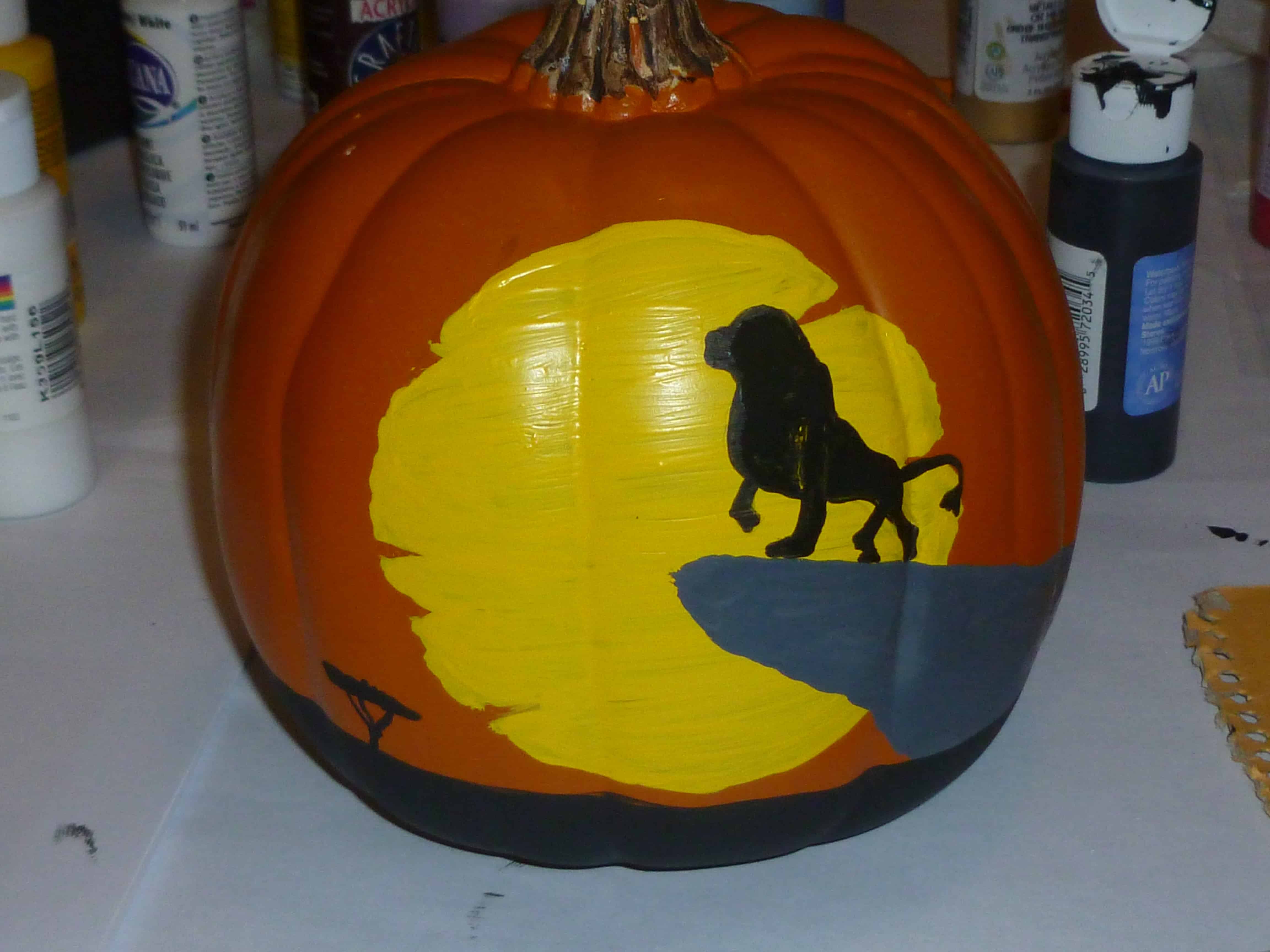 Are you still thinking about the idea of making painted movie pumpkins but you’d rather set a scene than re-paint a character or face? Then maybe this lovely painting of Pride Rock from The Lion King will stir up some inspiration in you! Come Home Disney shows you how they used simple shapes and silhouette ideas to recreate one of their favourite recognizable moments from the film on the surface of a pumpkin. 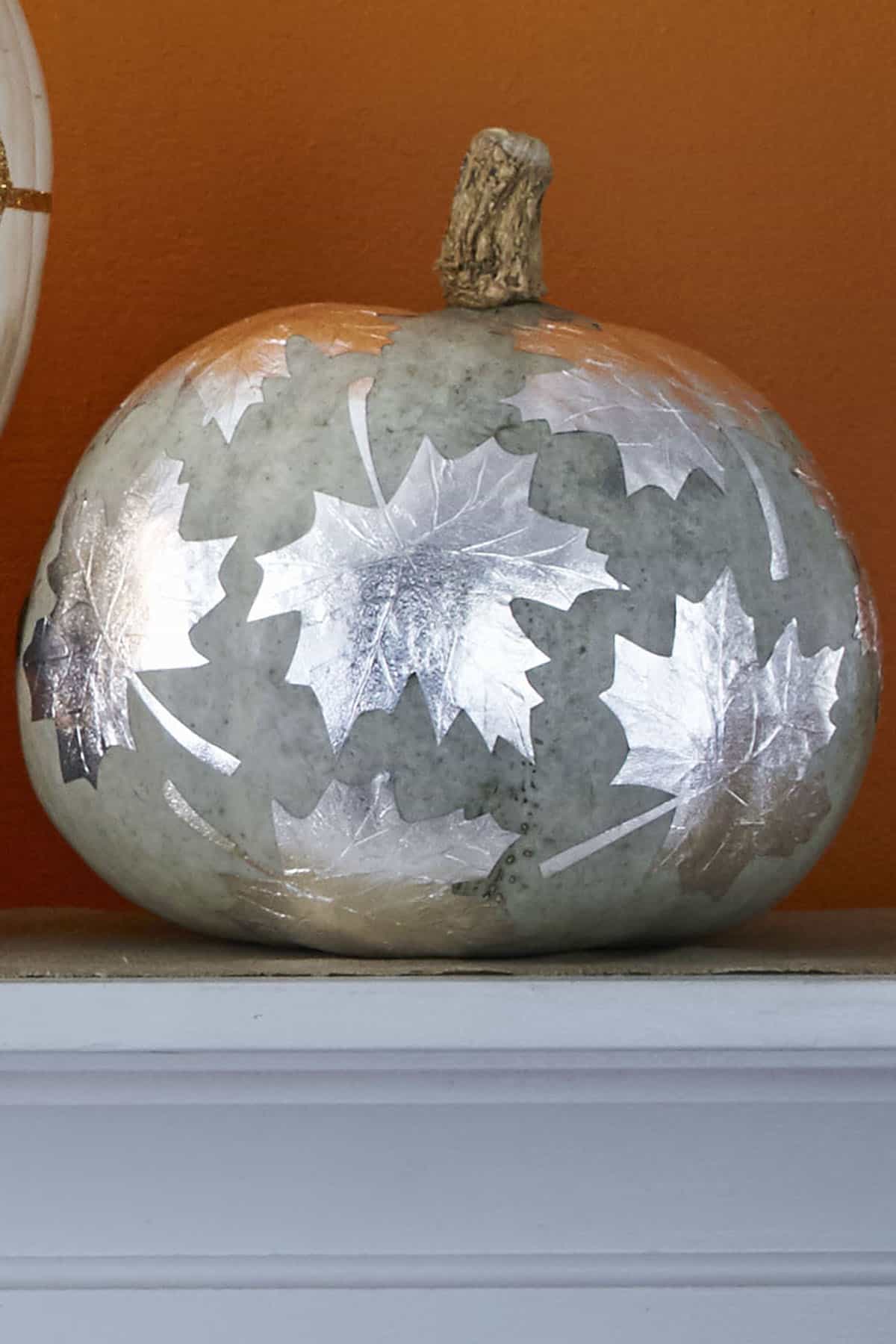 Okay, we know that we said this post was all about pumpkin painting designs, but there was just something so cool about this silver leaf idea from Woman’s Day that we absolutely couldn’t resist putting it on our list! Using silver leaf creates some metallic shine and texture that paint doesn’t usually have, so the technique is a little more like doing decoupage or applique than it is like painting, but you could get a similar design by using metallic silver paint and a stencil to make leaves on the surface of your pumpkin if you prefer! 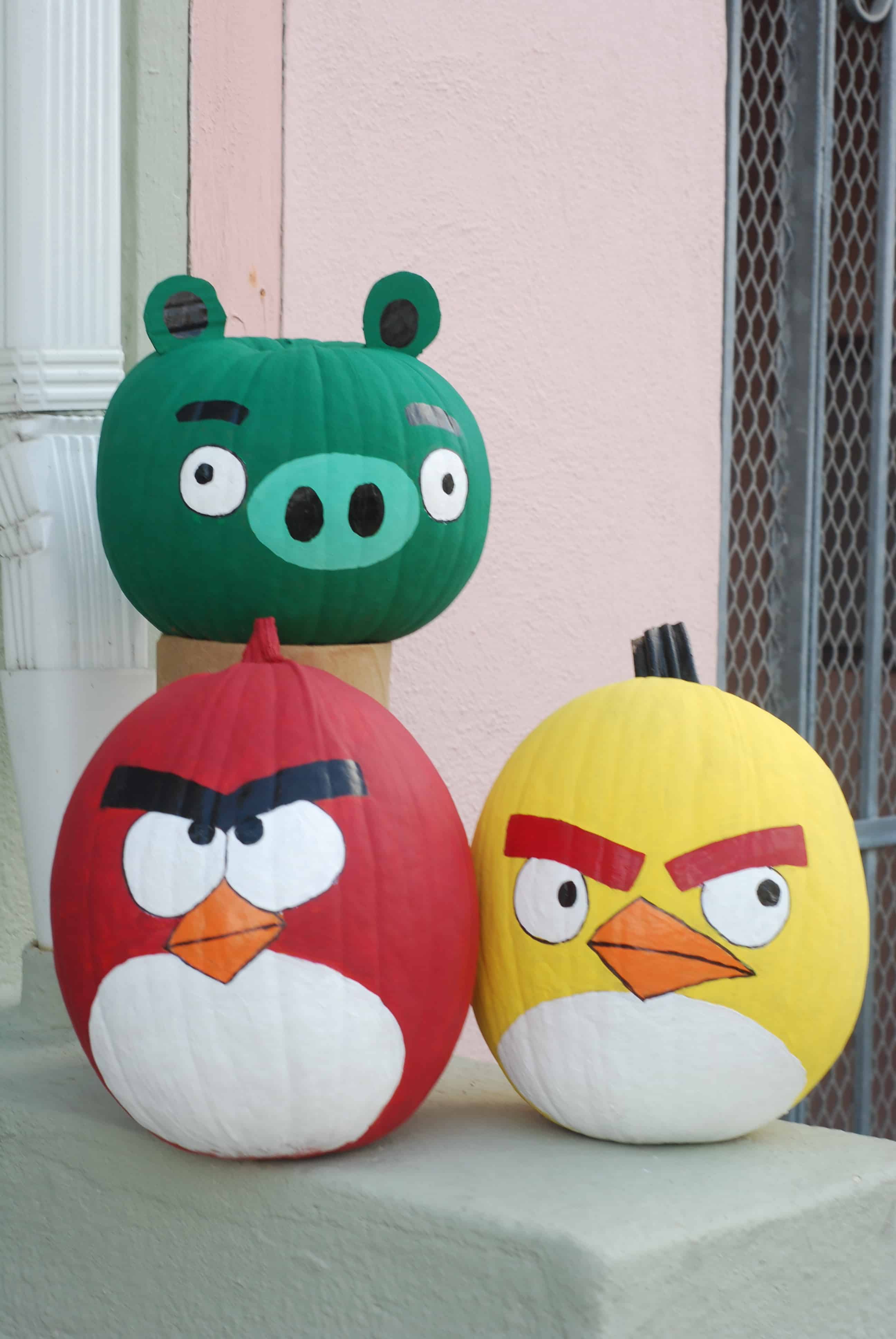 What if you love the idea of making character pumpkins but your favourite little cartoon buddies aren’t actually from a movie? Well, who said you can’t paint cartoon characters from absolutely whatever you want? We love the idea of painting characters from games too! That’s why we thought these fully painted little Angry Birds pumpkins were such a funny idea. Check out how each layer and shape was done on All About The Kids. 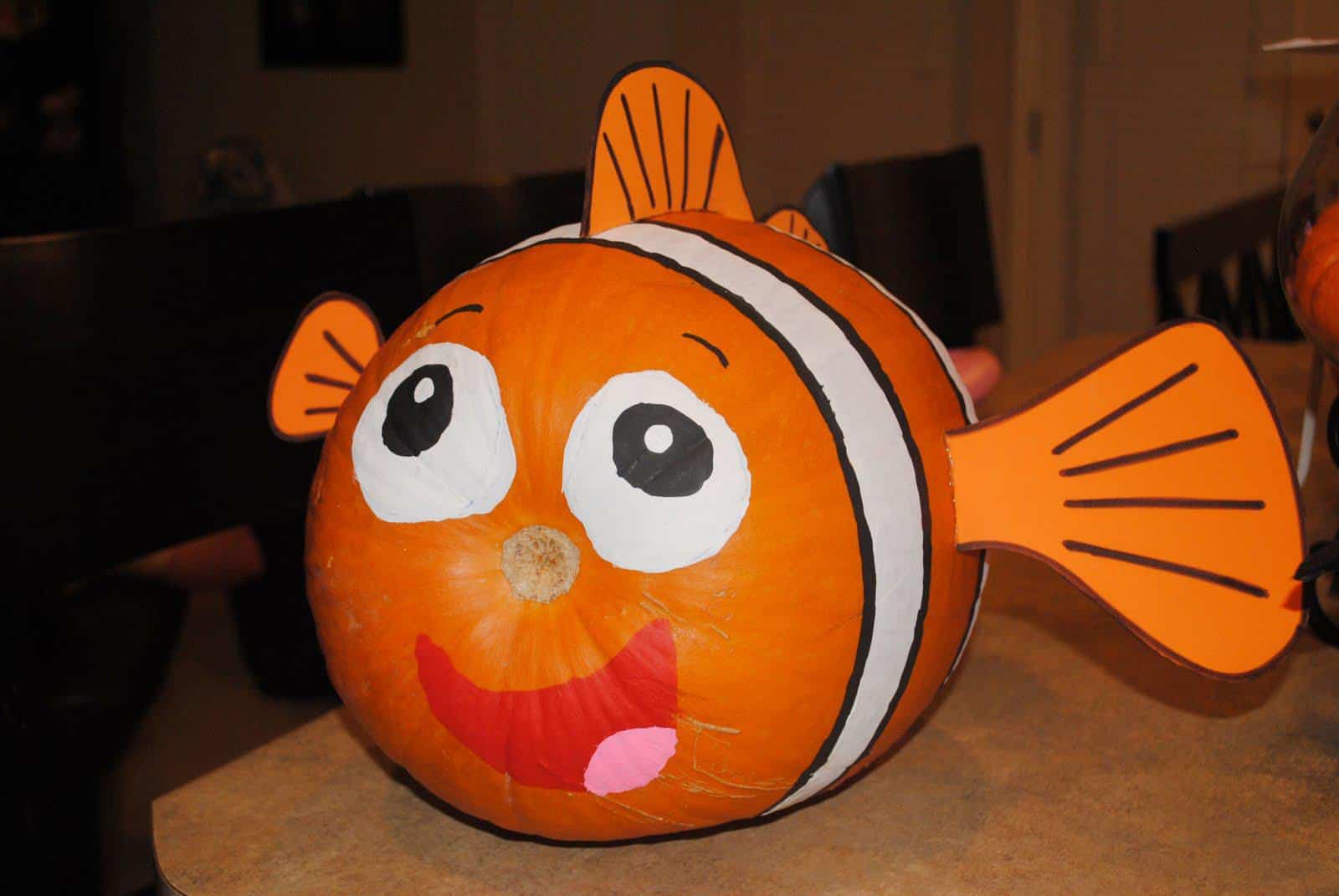 What if you have a character painting in mind for your pumpkin but its shape isn’t quite right when you stand it up the way you normally would? Well, who says you can flip it onto its side and paint it that way instead? Home Design Image reminds you that, with a craft like pumpkin painting, you can really do whatever you please. We enjoy the way they took advantage of the fact that their pumpkin was already orange by painting Nemo from Finding Nemo, only requiring them to paint the facial features and stripes. Adding paper fins to the side is a super cute idea too! 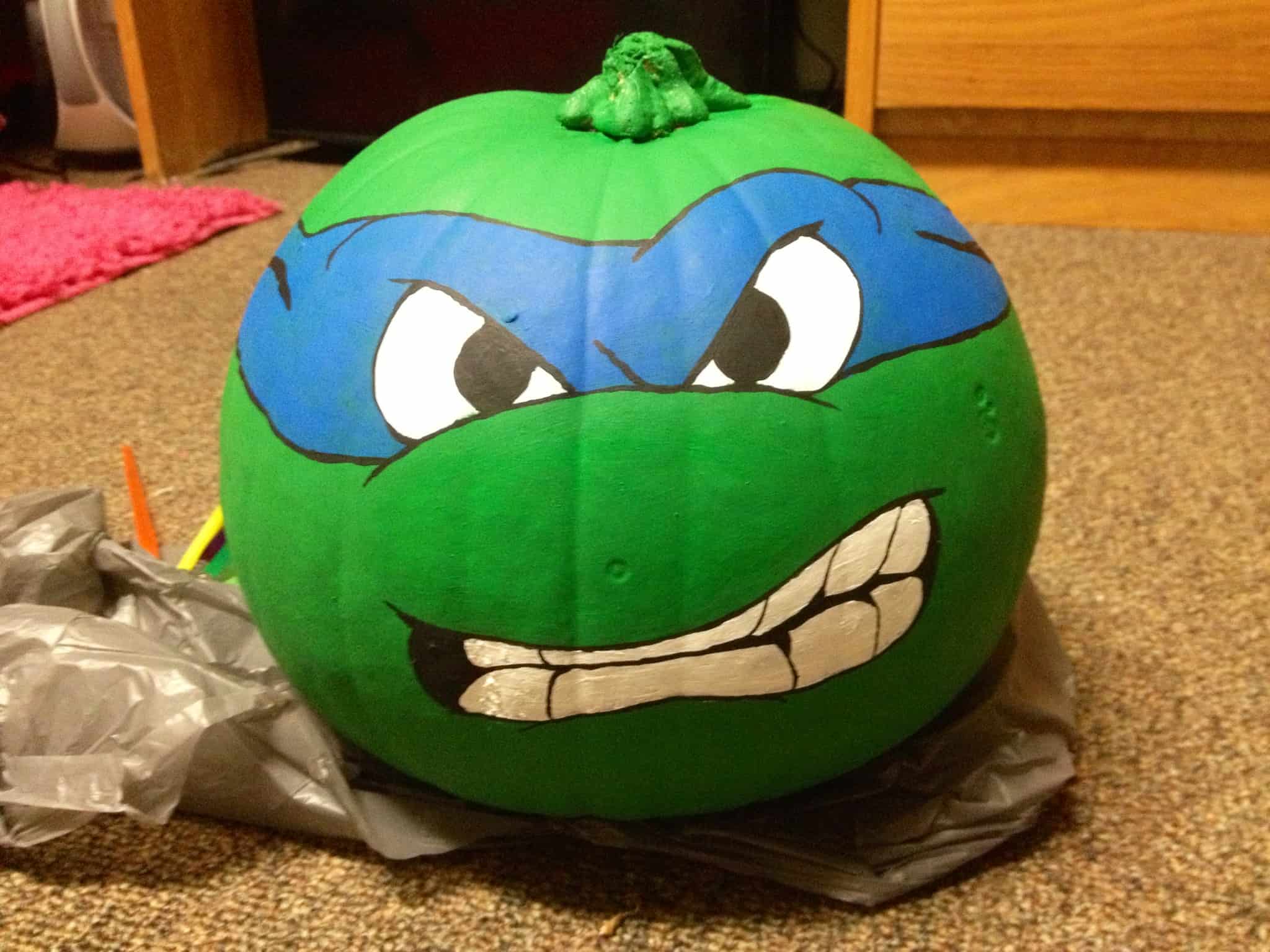 We know we’re talking a whole lot about pumpkins painted like cartoons right now but, really, can you blame us? It’s just so much fun to turn something 3D and seasonal into something you love from pop culture! It also makes your finished product more versatile in case you want to leave it out on into December if the weather allows. This awesome Teenage Mutant Ninja Turtles pumpkin from Crafty Morning is the perfect example of what we mean and we certainly think it’ll impress visitors! 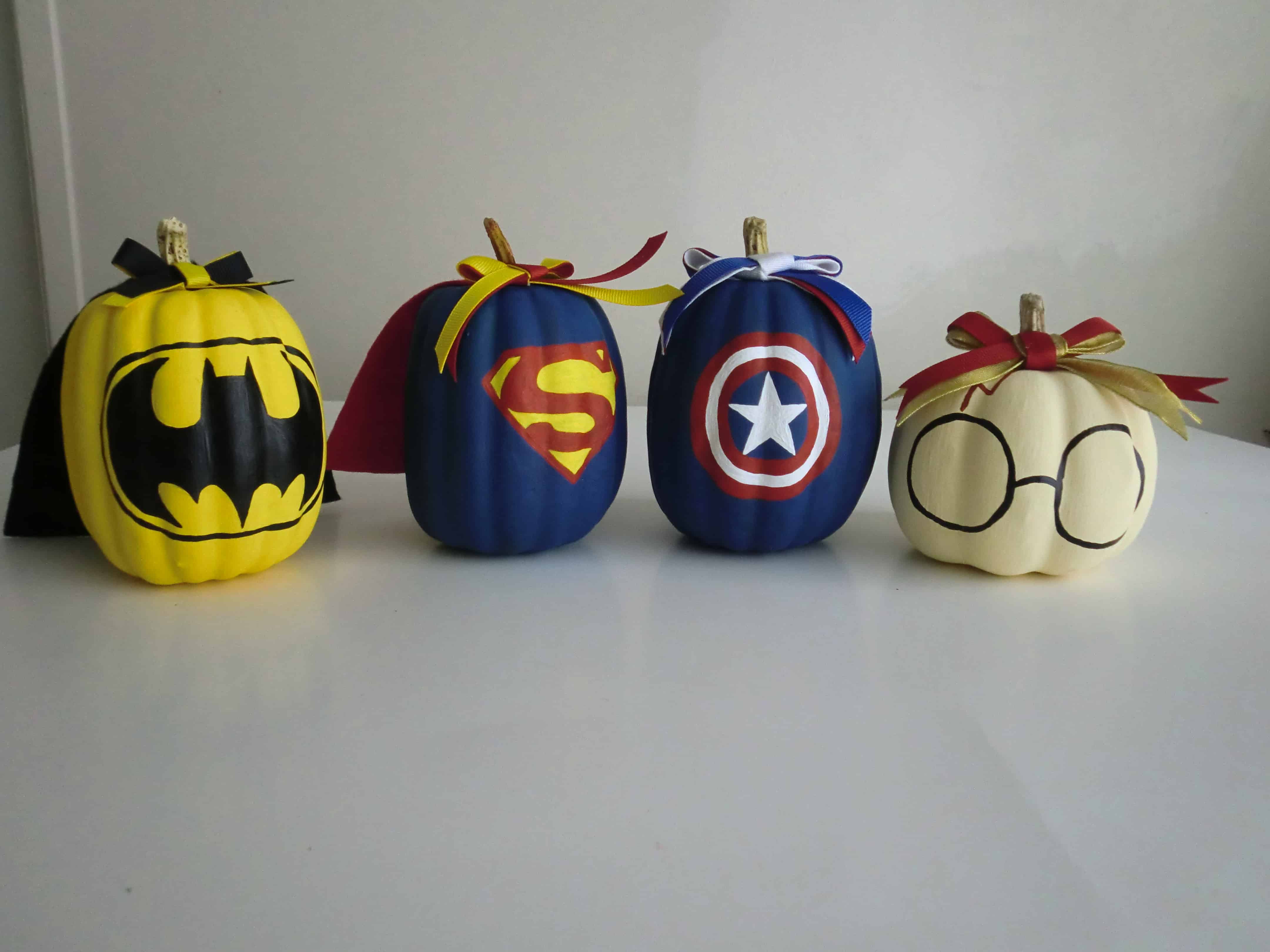 If you’re going to start getting into awesome pop culture designs with your pumpkin painting then there are innumerable awesome design ideas at your disposal! In our house, every child (and more than on adult) is a total comic book fanatic, so it’s only a matter of time before family pumpkin painting night yields at least one super hero. That’s why we could related so hard when we found this painting tutorial from The Pixel Peddler! They show you how to freehand paint the logos for Batman, Super Man, and Captain America. They even give you a bonus Harry Potter inspired design! 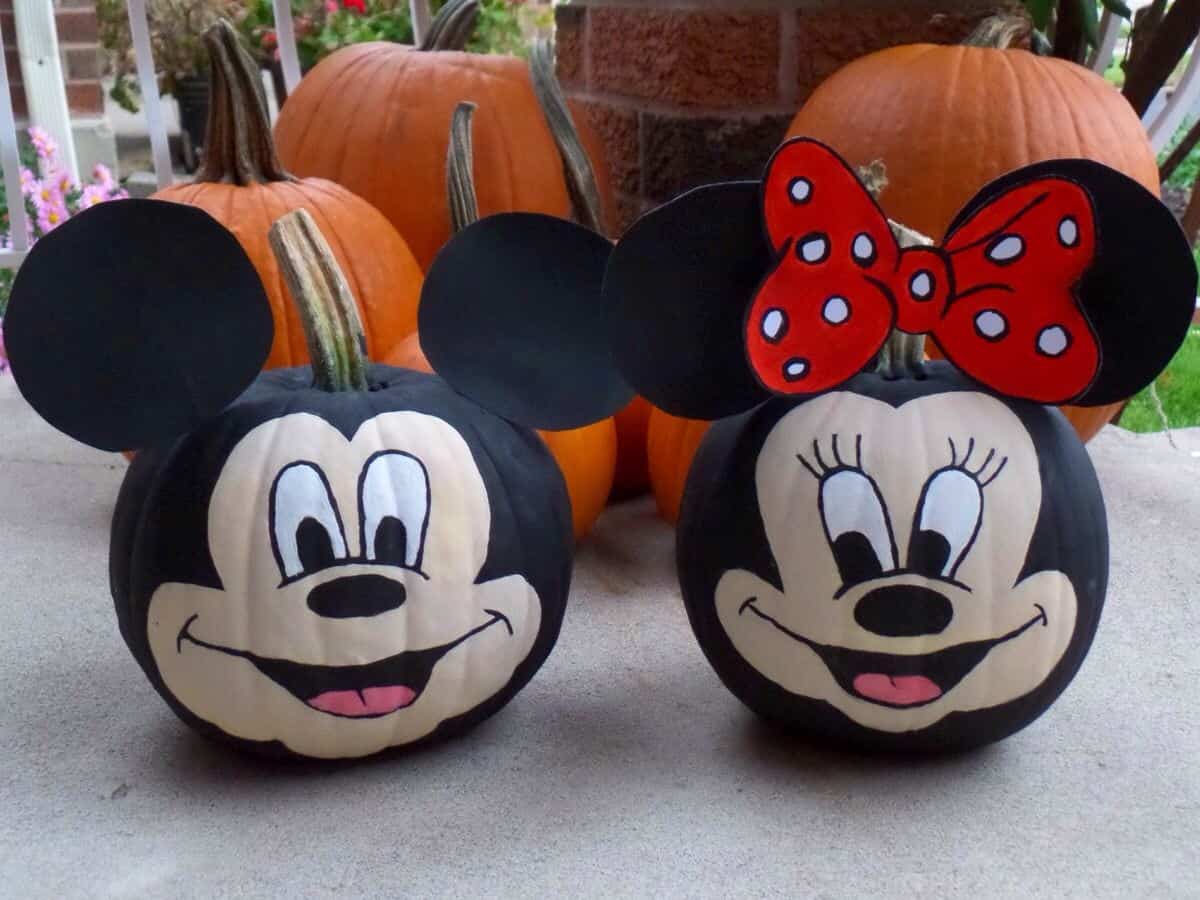 Are you a massive Disney fanatic absolutely any time of year? Then we have a feeling you’re going to think that we saved the best for last! Check out how this user on Pinterest transformed their fall pumpkins into a Mickey and Minnie Mouse set using just a few colours and some simple shapes. We can’t get enough of how cute their added paper ears look!

Have you painted other adorable pumpkin designs this year that you’ve got displayed proudly on your porch but you don’t see any similar designs to your on our list? Tell us about yours or link us to pictures in the comments section!