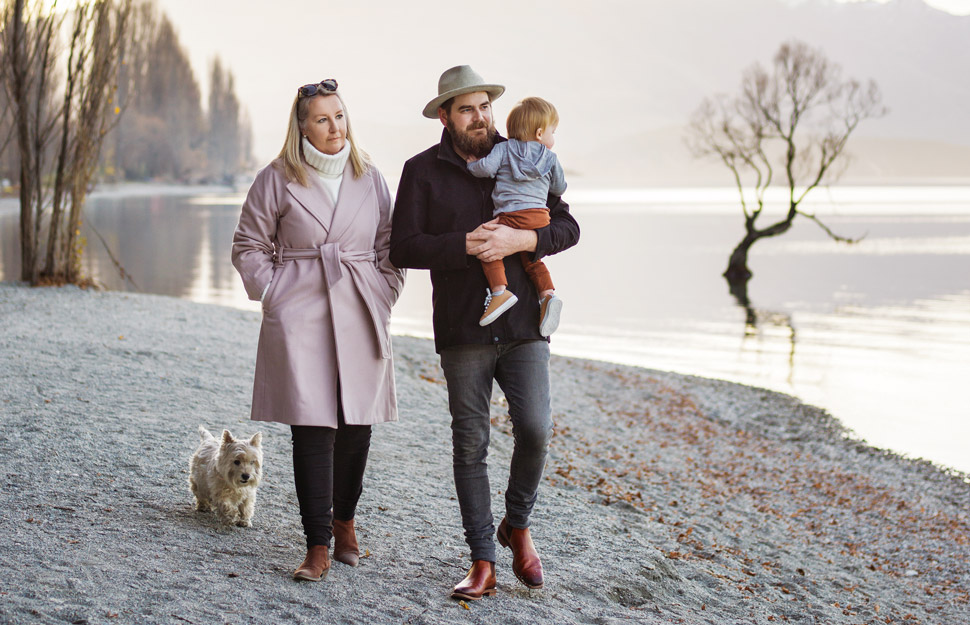 The excitement of opening new retail store Perriam in Christchurch vanished in an instant as the lockdown was imposed.

“Not awesome,” says Christina Perriam, with more than a touch of southern understatement, about how she and her husband Callum Grant felt as they closed the doors of their four-day-old Christchurch retail shop, Perriam, and sent their newly trained staff home indefinitely.

It had been a big project to launch a third brick-and-mortar retail outlet, which added to two others — the original Perriam store in Tarras, north of Cromwell, and the more recent premises on Wānaka’s main shopping street. As they headed home themselves, the long drive back to Wānaka gave them plenty of time to ponder the future of their business and the economy overall. Christina, holding Walter, wears a coat from her winter 2020 range made from cashmere and merino.

It didn’t feel like such a great time to be exposed to the new lease on that now shut-up store with no guarantee of when the doors might open, allowing customers to return. But life can throw curve balls, and this entrepreneurial couple was open to ideas and receptive to anything coming their way.

Along with many other New Zealanders in the same boat, they hunkered down and focused on steering their label of 100 per cent New Zealand-made women’s knitwear and fashion, babywear and products made from merino wool through the days ahead. The distractions of their 11-month-old son Walter helped, even if that often meant toddler destruction while parental eyes were distracted by computer screens. 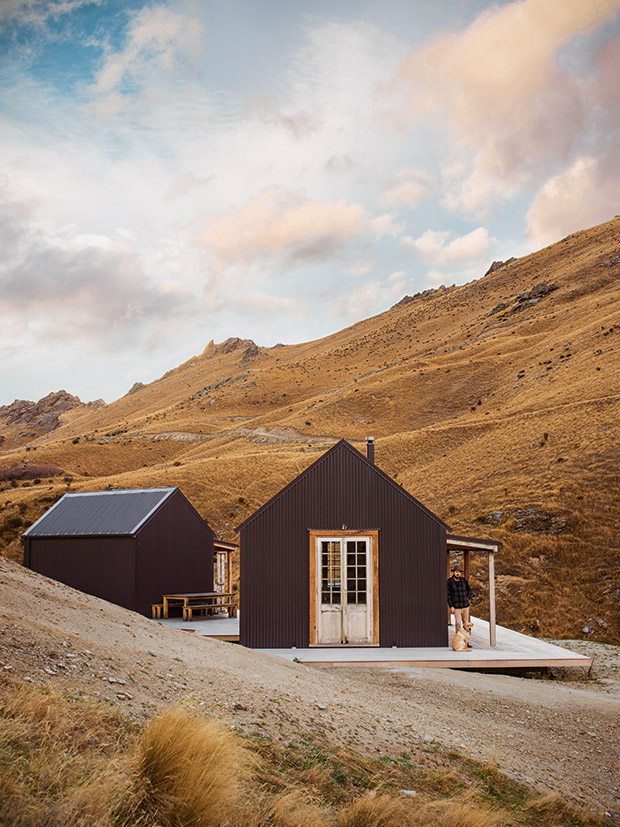 A pair of new huts on Bendigo Station’s backcountry gives the couple a place to get away from it all. The huts were built where three valleys meet, beneath Castle Rock and beside the gently burbling Devil’s Creek. (The site is reasonably close to a plaque marking the geographic centre of the South Island.)

Callum, born-and-bred in Wānaka, and equally in tune with wide-open spaces as Christina, joined the Perriam business shortly before the couple married in 2013. His career until then in hospitality had seen him spend several years at top local lodges and hotels including Edgewater Resort in Wānaka and Matakauri Lodge, a Robertson family lodge on the shores of Lake Wakatipu.

He’d sought a break from the burnout-inducing pressure of the hospitality industry and returned to Wānaka to sell real estate for a year, during which he met Christina. 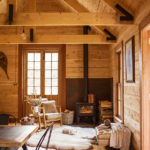 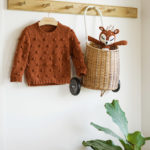 Christina’s fashion business (first written about in NZ Life & Leisure, January/February 2010) has always been intrinsically linked to her family’s Bendigo Station and the superfine merino wool it produces. Merino is likely in her DNA. Her father, John Perriam, was pivotal in reshaping the marketing of superfine fleeces and her mother, Heather, pioneered retailing merino garments at the small store in Tarras. (The location has since developed into a travelers’ stopping point with a collection of shops and a café.)

At one stage, Christina ran her fashion business from Tarras. But, as the bustling little enclave became more popular, it became increasingly difficult to focus on the strategic work needed to grow her business into the operation she wanted.

About the time she moved to Wānaka, she was introduced to Callum and says they’ve been pretty near-inseparable since that first meeting, and their match of skills has been complementary. “He is the doer while I’m the one with my head in the clouds,” she says. 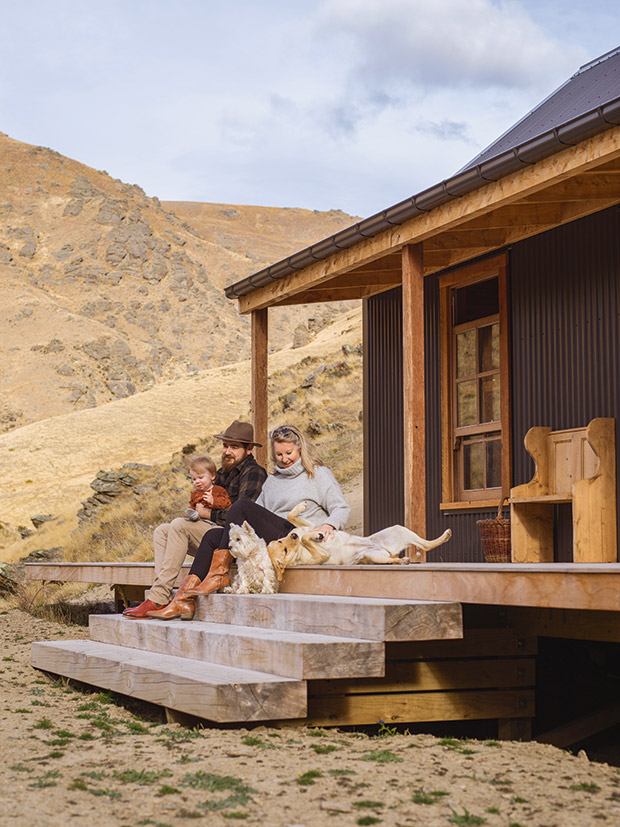 Babies and dogs are in heaven in the backcountry. Mimi, the west highland terrier, is 11, and Ivy, the labrador, is five months old.

“He jumps in behind me and gets stuff done, so we are a good business pair. I’m the one waking up and saying, ‘We should do this…’ And he’s my reality check asking the questions, the ‘hows’ and ‘whys’ and ‘what fors?’”

Callum says they each carry out distinct roles within the business and if that wasn’t the case, or if one was to interfere in the role of the other, there might be a disaster. So far, so good. No calamities. 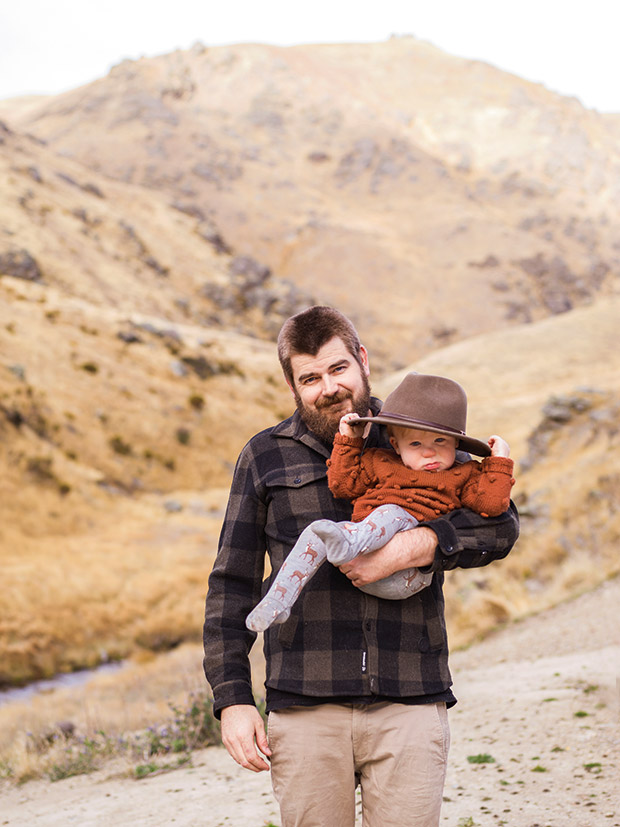 What they carry equally is a passion for keeping their business true to its promise of quality New Zealand-made, locally sourced products made from merino wool. During the lockdown, with their attention on Perriam online, they focused on a relatively new range of knitting patterns, needles and yarn supplied as a knitting kit. Christina predicted that while the range was already going well, there might be an increased locked-down interest in craft.

Already, she had started collaborating with Wānaka-based pattern-maker Lisa Craig, who has designed patterns for Vogue Knitting, and had finessed the production of environmentally friendly bamboo needles and wool from Bendigo — all traceable — and dyed to Christina’s interpretation of high-country colours. 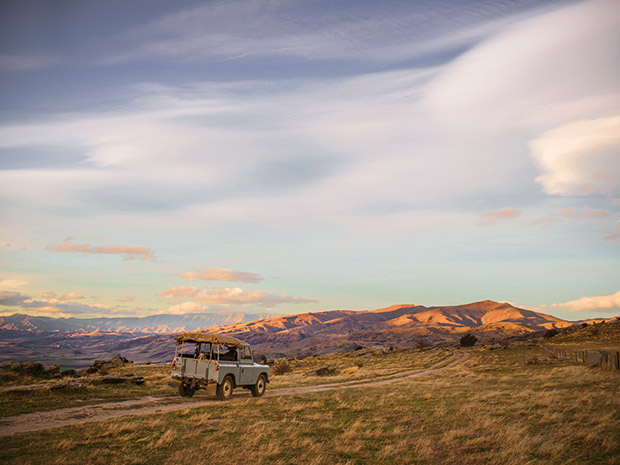 The Series III Land Rover is not the most practical, nor the fastest vehicle on the road but Callum loves it anyway and even drives to and from work on his daily commute which, as this is Wānaka, isn’t much more than a hop and a jump anyway — a manoeuvre an old Landie does quite well. He most appreciates the sense of freedom the vehicle gives him when out on the hills.

There it was, a perfectly pandemic-ready business. But what happened astonished even them.

Sales of wool, needles and knitting kits went nuts, through the roof. “A five-fold increase,” says Callum and, within days, they were out of yarn. 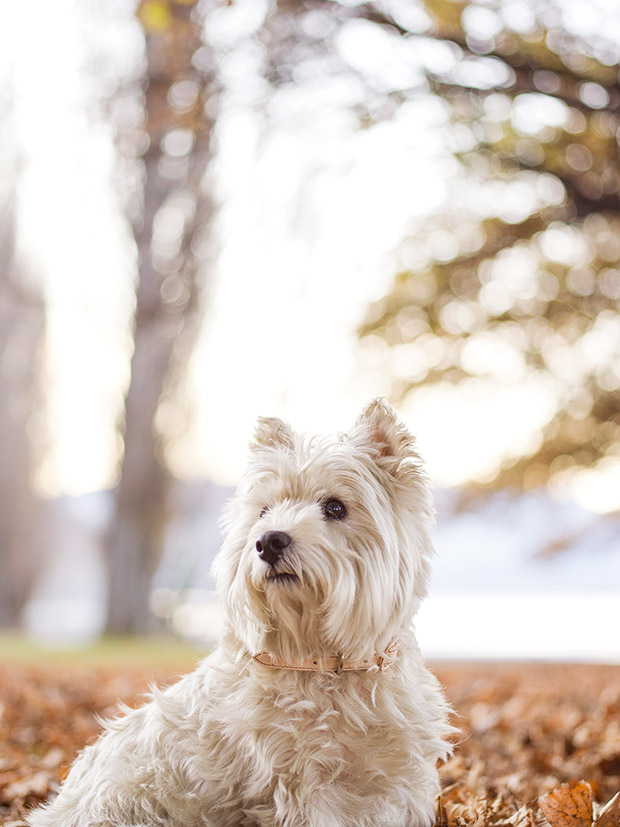 “It showed us that while we always knew the baby boomers were knitters, but so too are a fast-growing number of younger women,” says Christina. “There’s a real longing for the physicality of knitting; the pleasure of it is enjoyed by a new audience. And once they get started and complete an item, they are addicted.”

This new audience is more than happy to order online, spurring a whole new wave of “Why don’t we?” early-morning ideas from Christina. One that has the Callum tick of approval and will resume now the restrictions of coronavirus levels are in the past, is the knitting party. 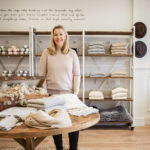 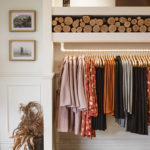 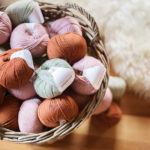 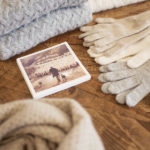 “These are cool social occasions,” says Christina “where young women get together to knit and maybe have a wine.”

And maybe, blokes? Probably not Callum. While he’s an outdoors boy with a love of Series III Land Rovers and the ability to hunt, it is hunting for food, rather than sport, that most appeals to him. He’s a bit of a sophisticate when it comes to the hunter-gatherer-cook aspect of life. He plans to improve his basic vegetable-growing skills in the manner of an evolved modern man. But that’s still a work in progress. Walter is a much-adored and wanted addition to the family. Christina had severe endometriosis from a young age. “We tried for a baby for a couple of years, although this was interrupted by a herniated disc in my L5 and I had to have an operation for it before being diagnosed with endo,” says Christina, shown here at home in Wānaka.

During the lockdown, Christina and Callum discovered, like so many people, that they didn’t need all the stuff they previously thought they did. They are enjoying this new perspective. 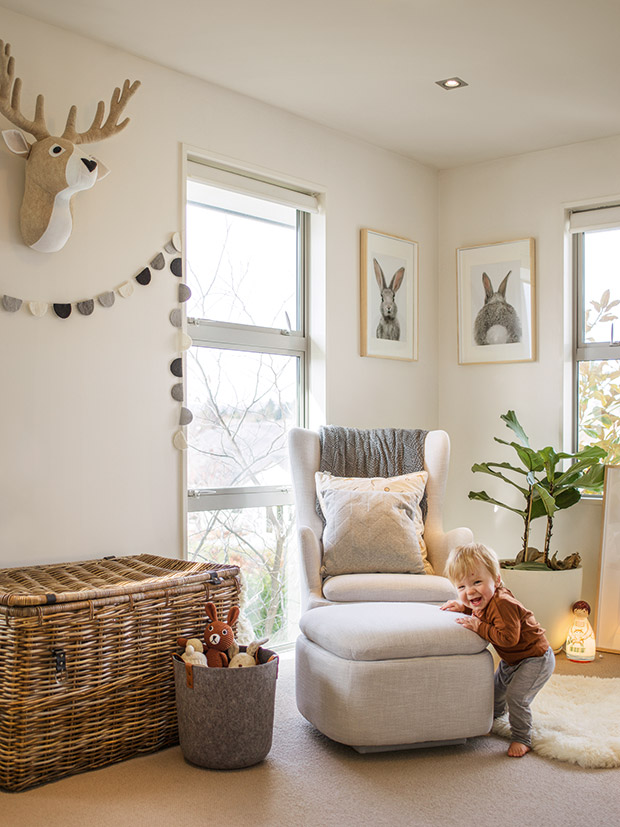 “After a year of improving my diet and cutting out sugar, dairy and gluten, my endo had gone from a stage-four diagnosis to a stage one. We conceived Walter using IVF and were successful on our second try. It was a very intense and emotional time, but it is worth it now we have our wee man.”

“It just made us all the more grateful, like being able to take Walter and go for a weekend to the huts on Bendigo, grateful for our families. We want to stay with the simpler things in life, not to be chasing the ‘big shiny thing’. It is wonderful.” perriam.co.nz

Builder Jeff Lambert of Alpine Builders in Wānaka sourced floorboards in Christchurch and veranda posts from a recycling business just out of Clyde for the huts, as well as incorporating doors and windows from the decommissioned Northburn Event Centre near Cromwell. The height of the doors and windows meant architects Richard Pearce and Libby Morgan (of Raw Architecture) had to make the structures very high. 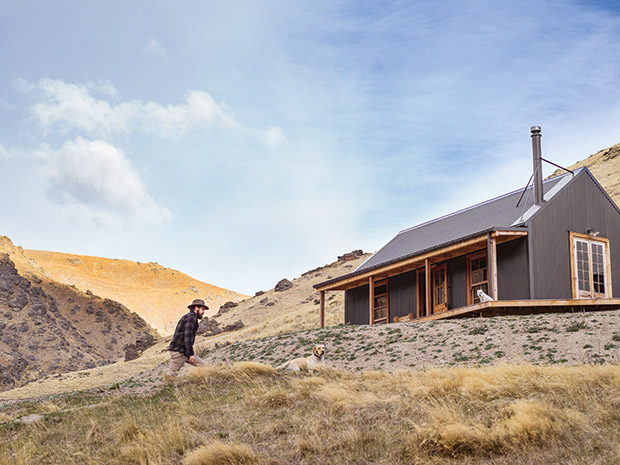 Callum is a hunter but only for what he can serve at the table — in this environment that is mostly hares and rabbits. A few rabbit pies have been cooked in recent times.

One is a bunkhouse, and the other has a kitchen, fireplace and living area. There’s no running water or electricity and bathroom facilities are just a basic long-drop. The huts might form part of a large Bendigo Station tourism venture in the future but at the moment they serve as an escape venue for family and friends.

A second life in Central Otago: A promising equestrian turns to knitting and sewing after a major spinal injury

The post A Wānaka couple’s high-country merino yarns hit the mark during the lockdown knitting craze appeared first on thisNZlife.