Unless you’re in the market for a new car, household appliance, or game console, or if you’re involved in the manufacture of these things, chances are pretty good that the global semiconductor shortage hasn’t directly impacted you yet. But we hobbyists might be due for a comeuppance as the chip shortage starts to impact our corner of the market. We suppose it’s natural that supplies of the chips needed to build Arduinos and Raspberry Pis would start to dry up, as semiconductor manufacturers realign their resources to service their most lucrative markets. Still, it was all sort of abstract until now, but seeing dire quotes from the likes of Adafruit, Pololu, and Sparkfun about the long lead times they’re being quoted — some chips won’t be seen until 2023! — is disheartening. As are the reports of price gouging and even hoarding; when a $10 part can suddenly command $350, you know something has gone seriously wrong.

But have no fear — we’re certain the global chip shortage will have no impact on the planned 2027 opening of the world’s first space hotel. Voyager Station — once dubbed Von Braun Station but renamed for some reason — looks for all the world like Space Station V in “2001: A Space Odyssey”, or at least half of it. The thing is enormous — witness the Starship docked in the center hub, as well as the several dozen shuttle-like craft — escape pods, perhaps? — attached to the outer rim. The renders are imaginative, to say the least — the station looks very sleek, completely unfettered by such banalities as, say, solar panels. We get that a private outfit needs to attract deep-pocketed investors, and that one doesn’t do that by focusing on the technical details when they can sell a “premium experience”. But really, if you’re going to space, do you want basically the same look and feel as a premium hotel on Earth, just with a better view? Or would you rather feel like you’ve actually traveled to space?

Speaking of space, did you ever wonder what the first programmable calculator in space was? Neither did we, but that doesn’t mean we didn’t find this detailed story about the HP-65 that was sent up on the Apollo-Soyuz Test Project in 1975 pretty fascinating. The ASTP was the last hurrah of Apollo, and an often underappreciated engineering challenge. Linking up the two spacecraft safely was not trivial, and a fair number of burn calculations had to be made in orbit to achieve rendezvous and docking, as well as to maintain orbit. The HP-65, a programmable calculator that went for about $750 at the time (for the non-space-rated version, of course) had several programs loaded onto its removable magnetic cards, and the Apollo crew used it to verify the results calculated by the Apollo Guidance Computer (AGC). 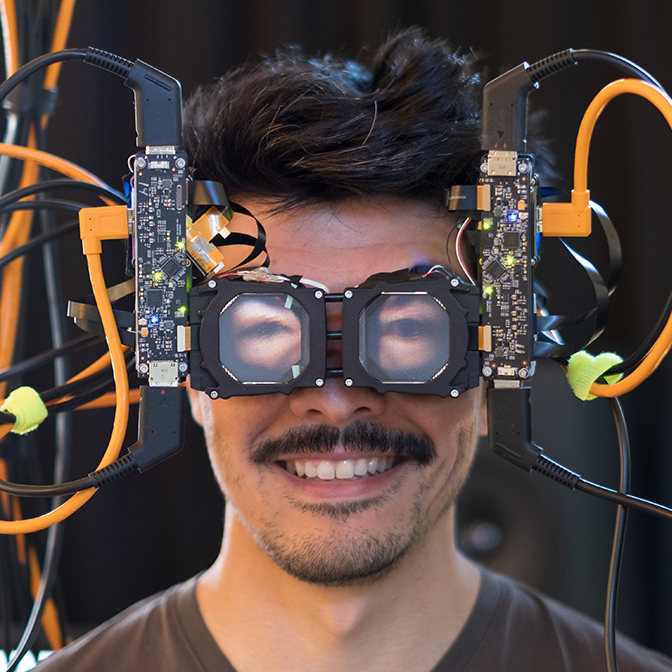 Facebook, a company that exists by providing people with a product they don’t need but now somehow can’t live without, is now dipping a toe into weird, weird waters: reverse-passthrough virtual reality. The idea, we take it, is that as users more widely adopt VR and integrate it into their daily lives, the VR headsets everyone will be wearing will make face-to-face contact more difficult. So what better way to solve that problem than by projecting a live image of the VR user’s eyes onto a screen outside the VR rig, for any and all to see? Pure genius, and not the least bit creepy. They’ve perhaps got a bit of work to go before achieving their goal of “seamless social connection between real and virtual worlds”.

And speaking of eyes, it’s good to know that developers are still hard at work keeping the most vital applications running at peak efficiency on today’s hardware. Yes, the venerable XEyes, a program for the X Window System on Unix-like operating systems that draws a pair of googly eyes on the screen to follow your mouse movements, has finally moved to version 1.2.0. It’s been 11 years since the 1.1.0 upgrade, so it was a long time coming. If you haven’t had the chance to play with XEyes, fear not — just about any Linux machine should be able to show you what you’ve been missing. Or, you know, you could even run it on a camera as the video below the break shows.