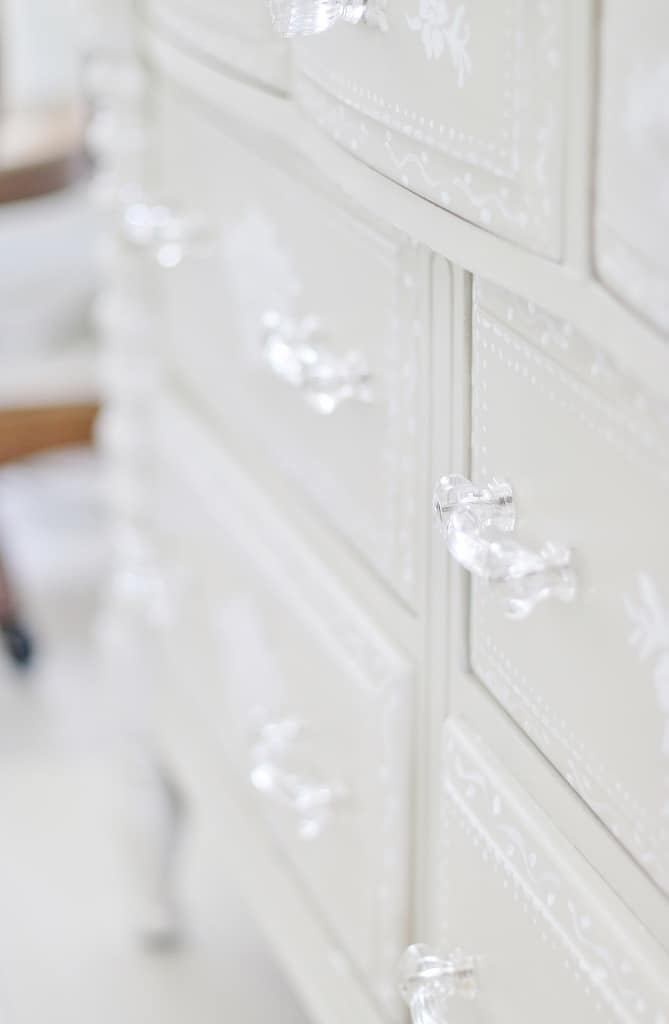 Have a yard sale piece that needs a project? Why not stencil it? Here’s a simple tutorial on how to stencil wood with step-by-step instructions.

Raise your hand if you have a project going on.

At this very second.

Raise both hands if you have more than one. Or more than two. Or maybe 17 consecutive projects that you have either started or plan to start or have sitting up in your guest room closet yet unfinished.

Come sit by me.

Right now we are in the middle of building a fence and adding a brick rain gutterway and building organizers in Westleigh’s closet and adding new window latches to the front room and sewing a pillow and distressing baskets and several other projects that shall remain nameless.

See what I mean.

So many projects? So little time. Good thing this one was easy and only took me three Gilmore Girl episodes to finish.

Here’s how to stencil wood and makeover a dresser with a little paint and imagination. 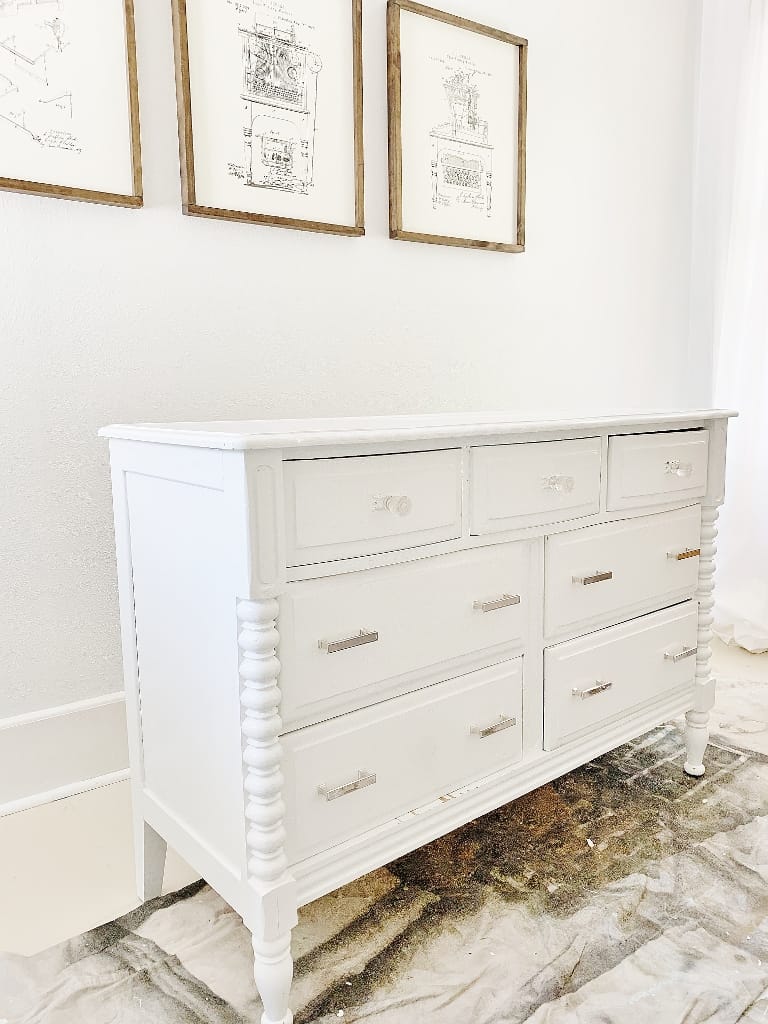 stencil (I used this one here)

This is where we started.

It came from a thrift store with a damaged wood top and sides and it was originally painted white.

For this project, I wanted a new base coat and something with a little more depth, so it was painted SW Sandbar. 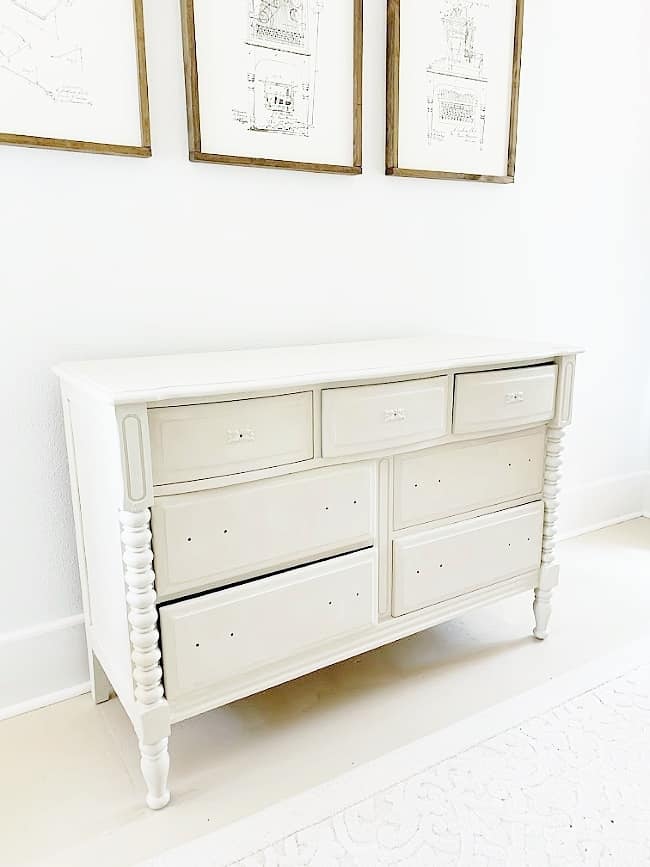 Here’s the dresser with its first coat of paint.

It’s darker than it looks in the pictures.

This room gets tons of natural light, so it appears lighter. 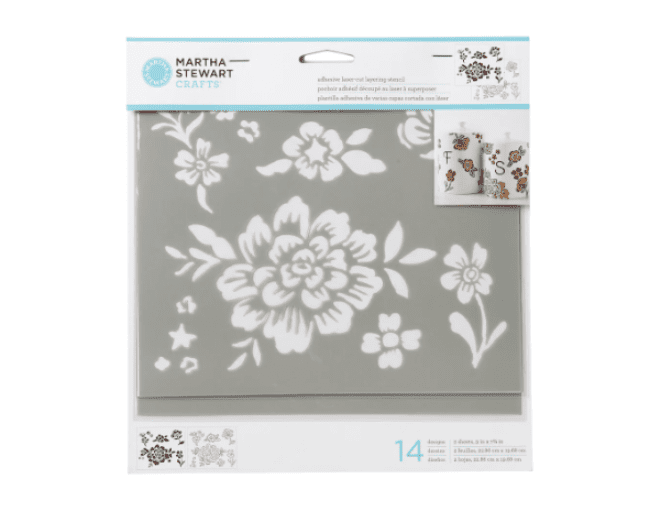 I wanted to add flowers to the dresser, but I wasn’t sure if I could paint them how I wanted them, so I found this stencil with the perfect flower pattern.

You can see it here.

I ordered it online from Micheal’s. It actually comes with two different sheets. There’s an outline of the flowers and the basic floral pattern you see here. 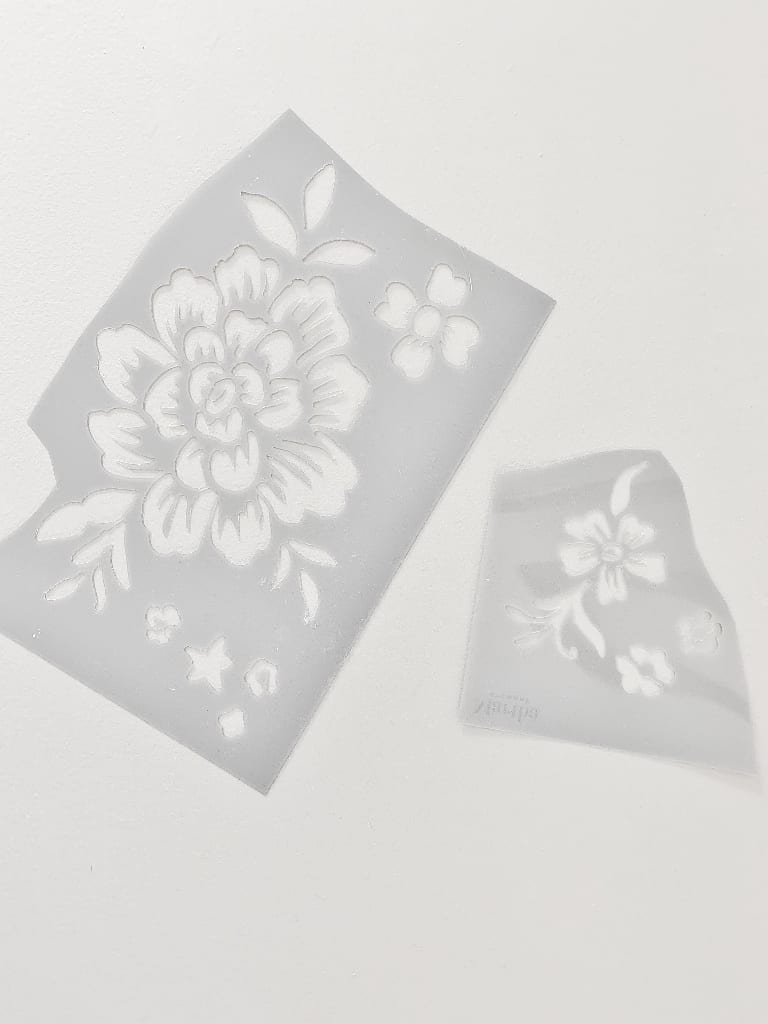 I used the top sheet and cut it into smaller pieces to make it easier to work with.

I placed them on the drawers to get an idea of where they would go and what the pattern would look like. 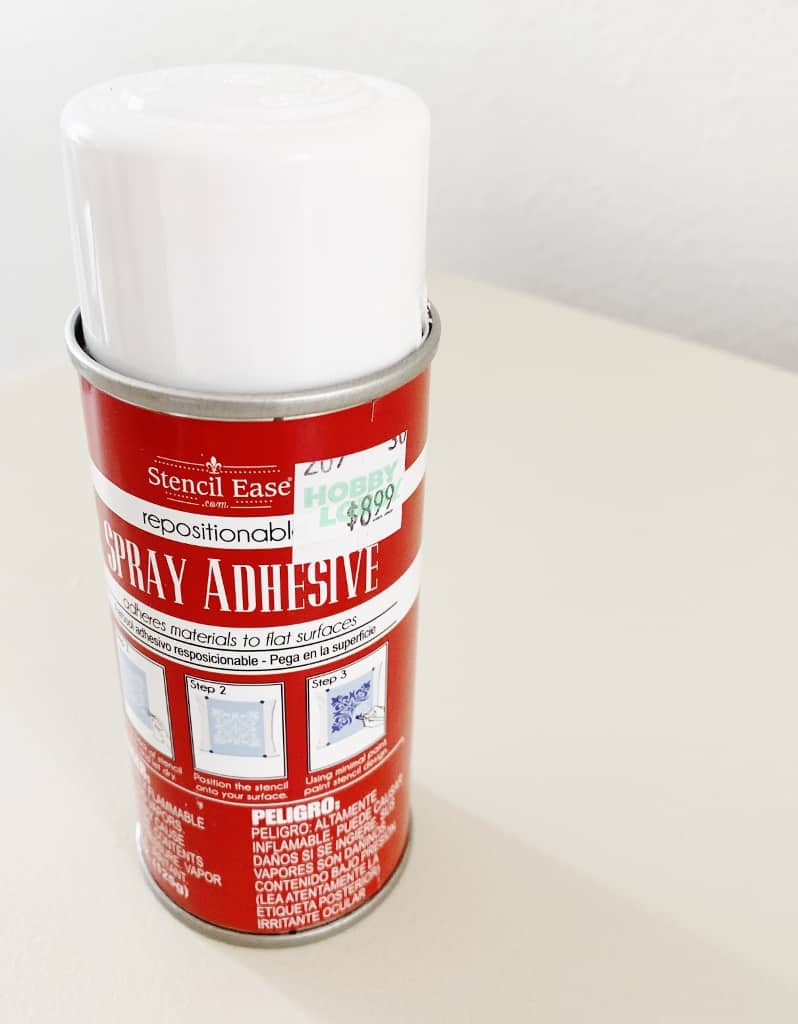 step 3: best tip ever for how to stencil wood

This is my BEST tip if you are going to stencil wood.

This is the spray that I got at Hobby Lobby.

For a flat surface like wood, it made the project SO MUCH EASIER. 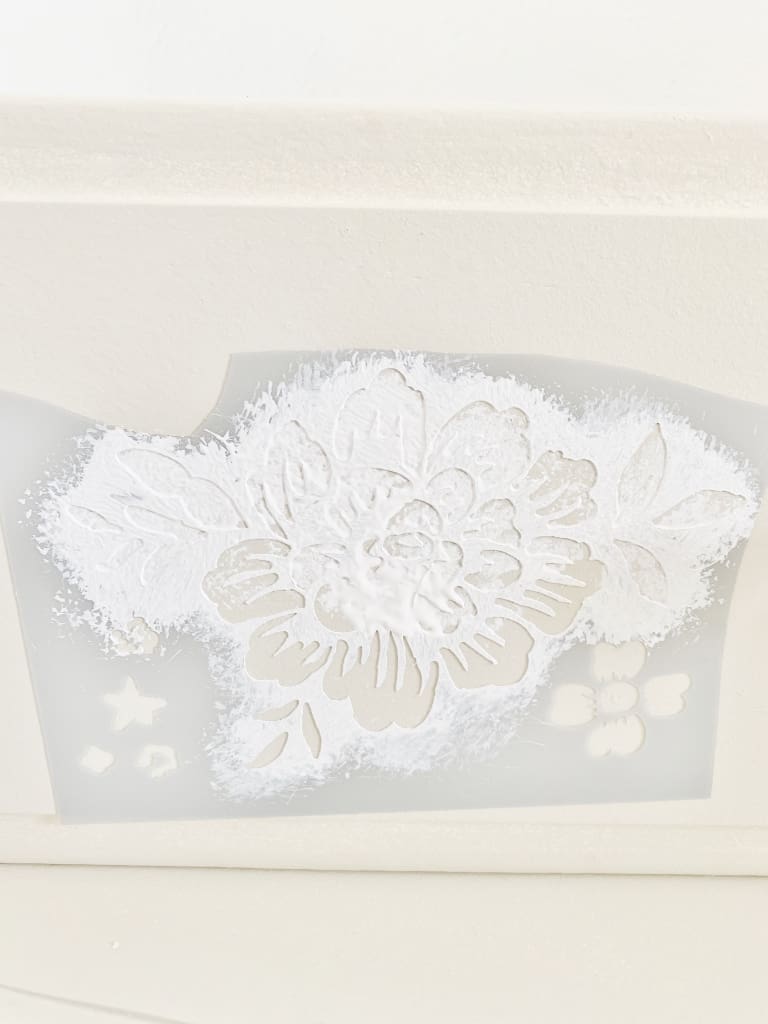 Simple tip: make sure to spray LIGHTLY. You don’t want to overspray and have it dripping down the sides of the dresser.

Here’s the stencil mid-stamp without me having to hold it. It stays in place and makes the entire project so much easier. 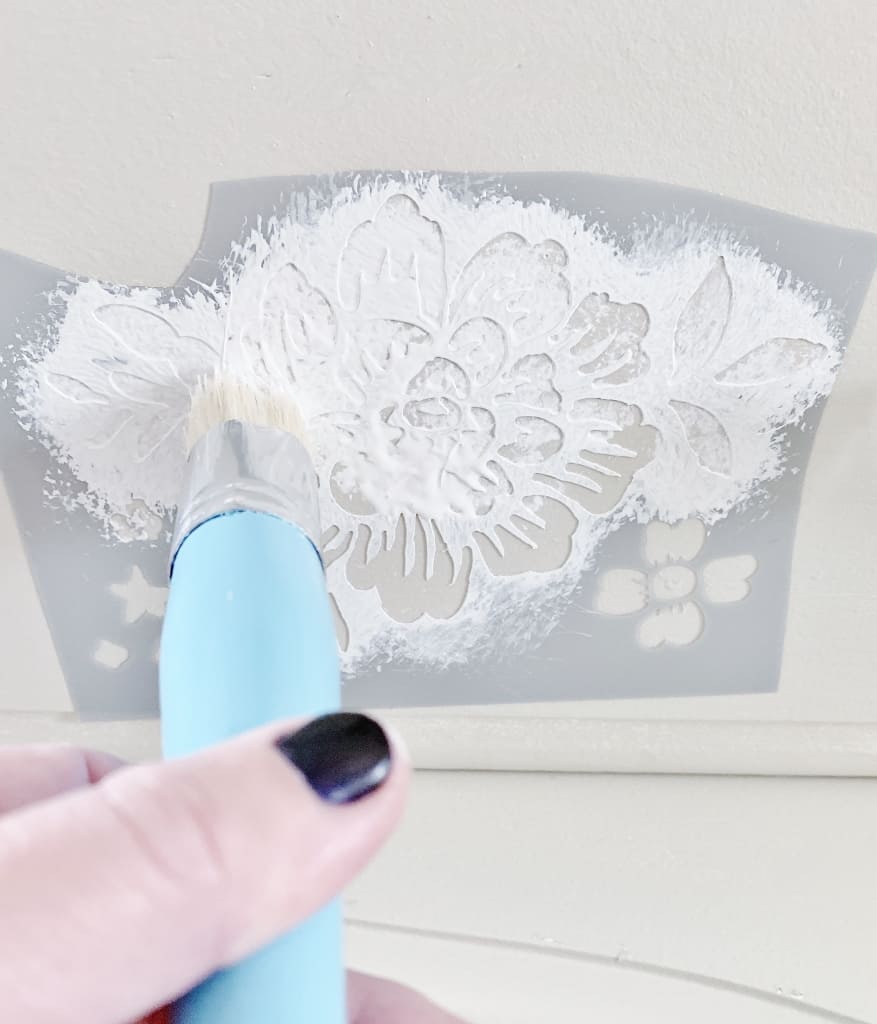 Take your stencil brush (you want to make sure you have a brush with a flat head to prevent paint from seeping under the sides of the stencil) and lightly pounce the paint into the corners of the stencil.

I wanted my dresser to have a faded vintage look, so I only used one coat of paint and applied a light coat. 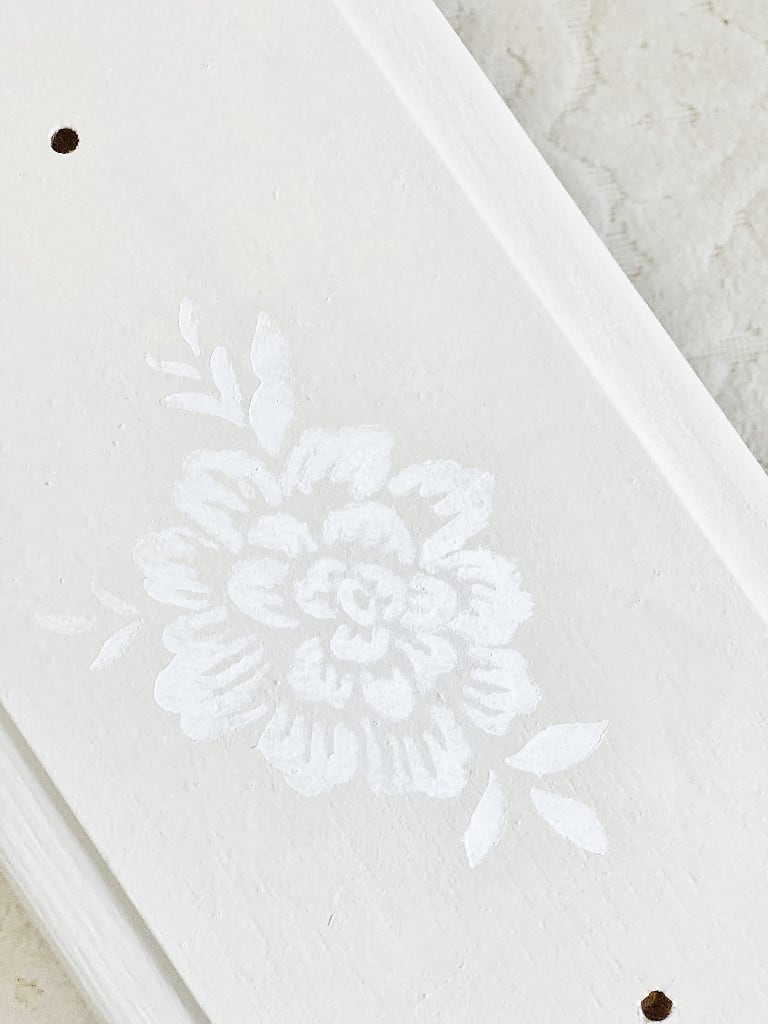 In addition, there’s not that much contrast between my two paint colors, so it made stenciling easier. If you have a dresser project with high contrast (for example—like a navy dresser with a white stencil pattern) then you might want to start by painting the base coat on the stencil, letting it dry and adding two coats of the white. It will take a lot longer than three episodes of the Gilmore Girls, but your pattern will be clean and crisp. 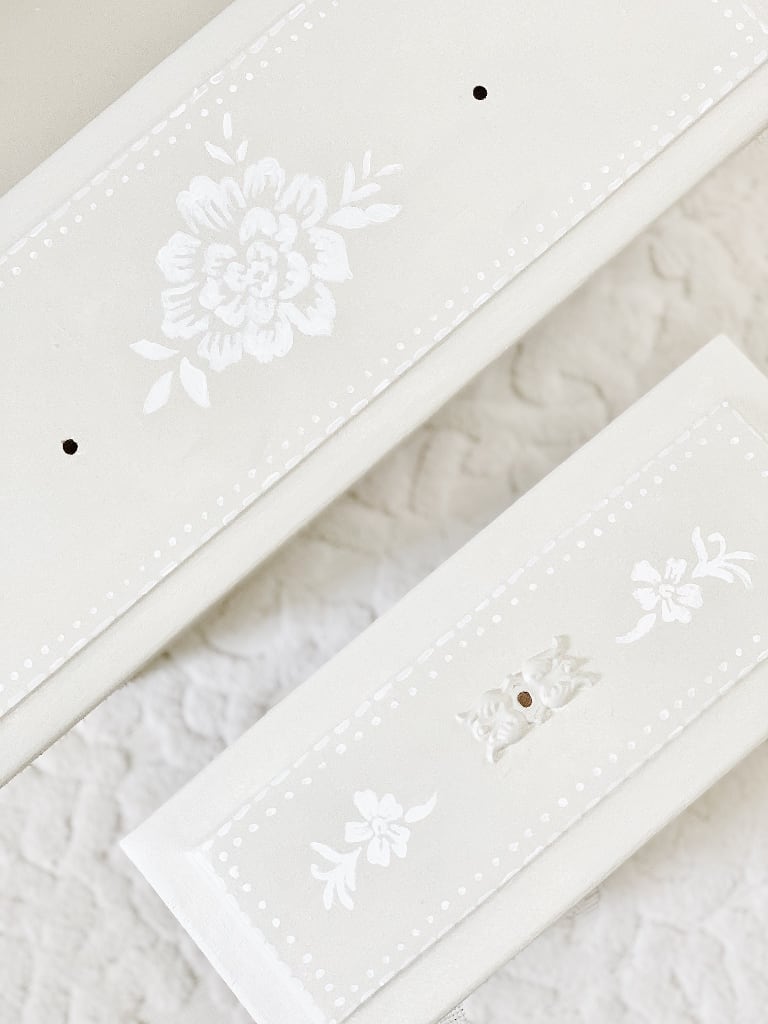 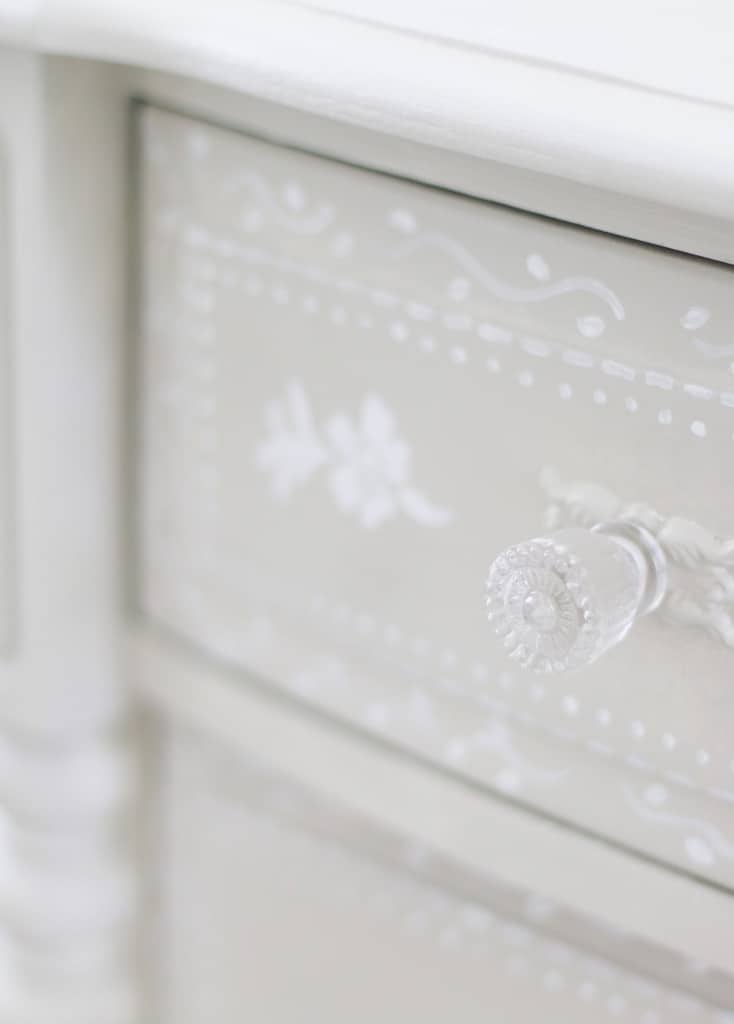 I also added the smaller floral stencil to the three top drawers.

Quick tip for how to stencil wood: depending on how vintage you want your dresser to look, you may need to go back and touch up the stenciled areas to give it more definition.

I did that with the flowers to make them a little crisper.

You can also leave them a little faded if you like, too. 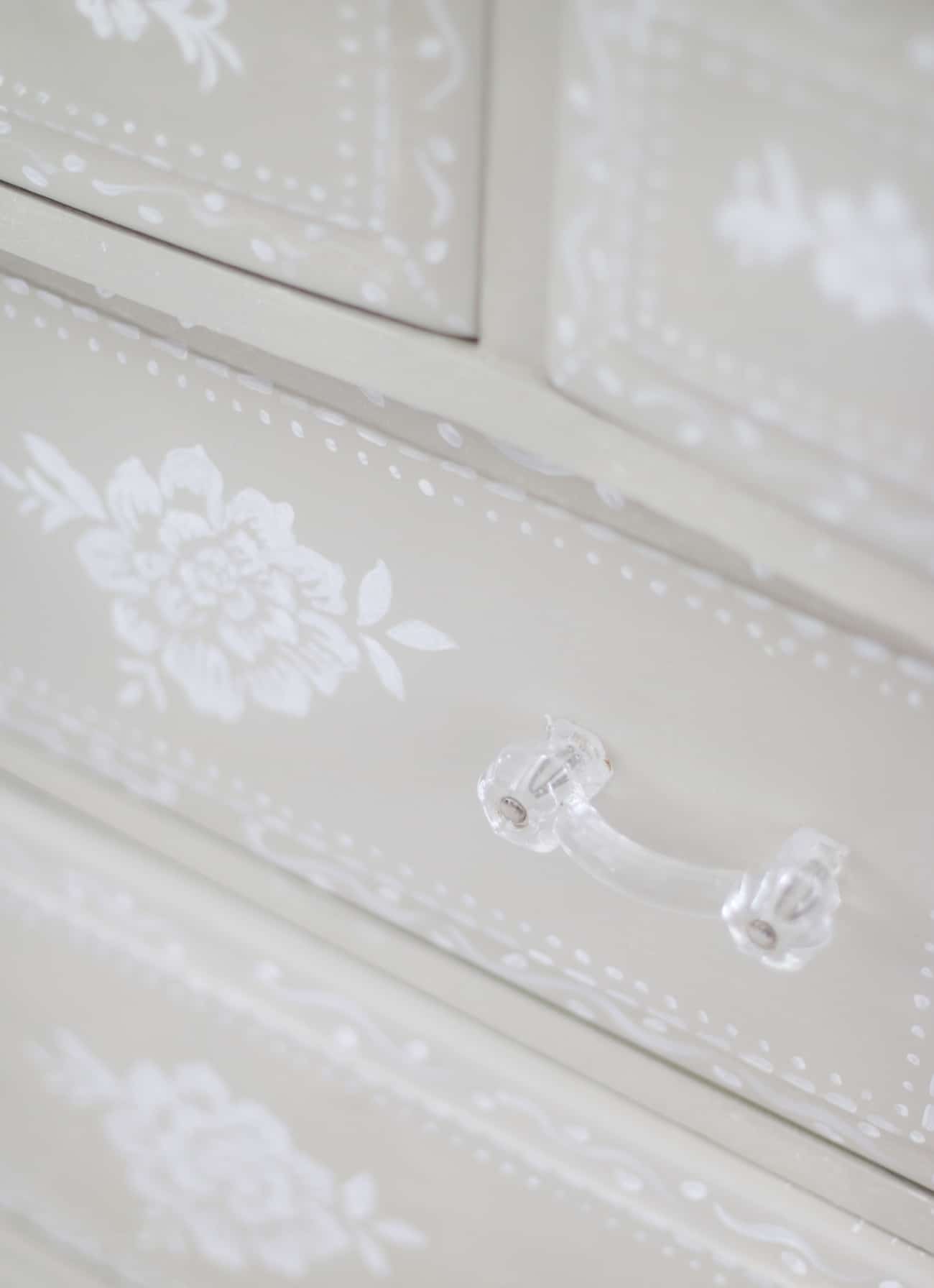 I added dots and lines and a leafy pattern around the edges.

I just wanted the dresser to have a little more personality than the stencil.

Use a small paintbrush and your acrylic white paint to add these. 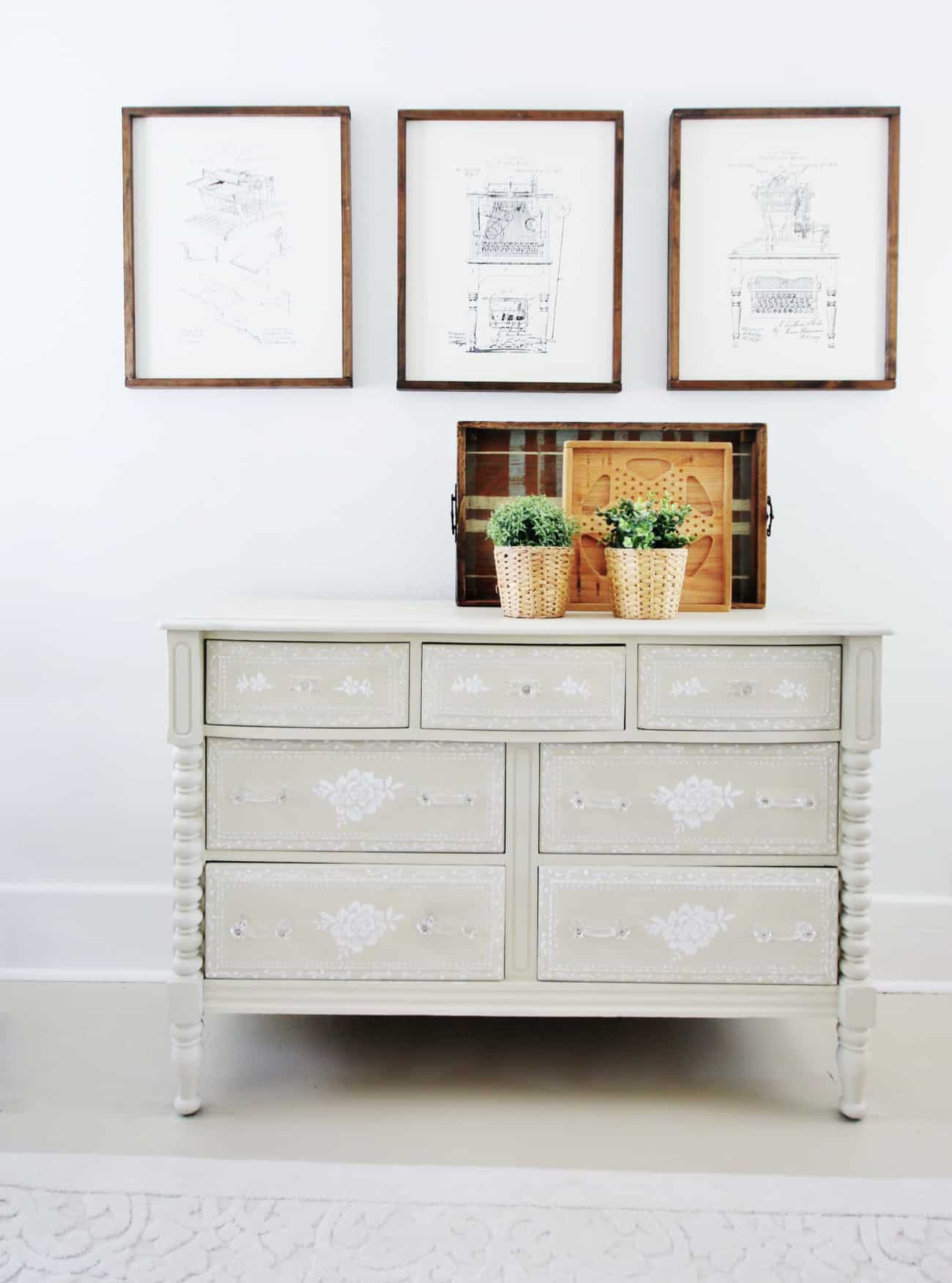 Can you even believe the difference?

Let’s look at the before and after one more time. 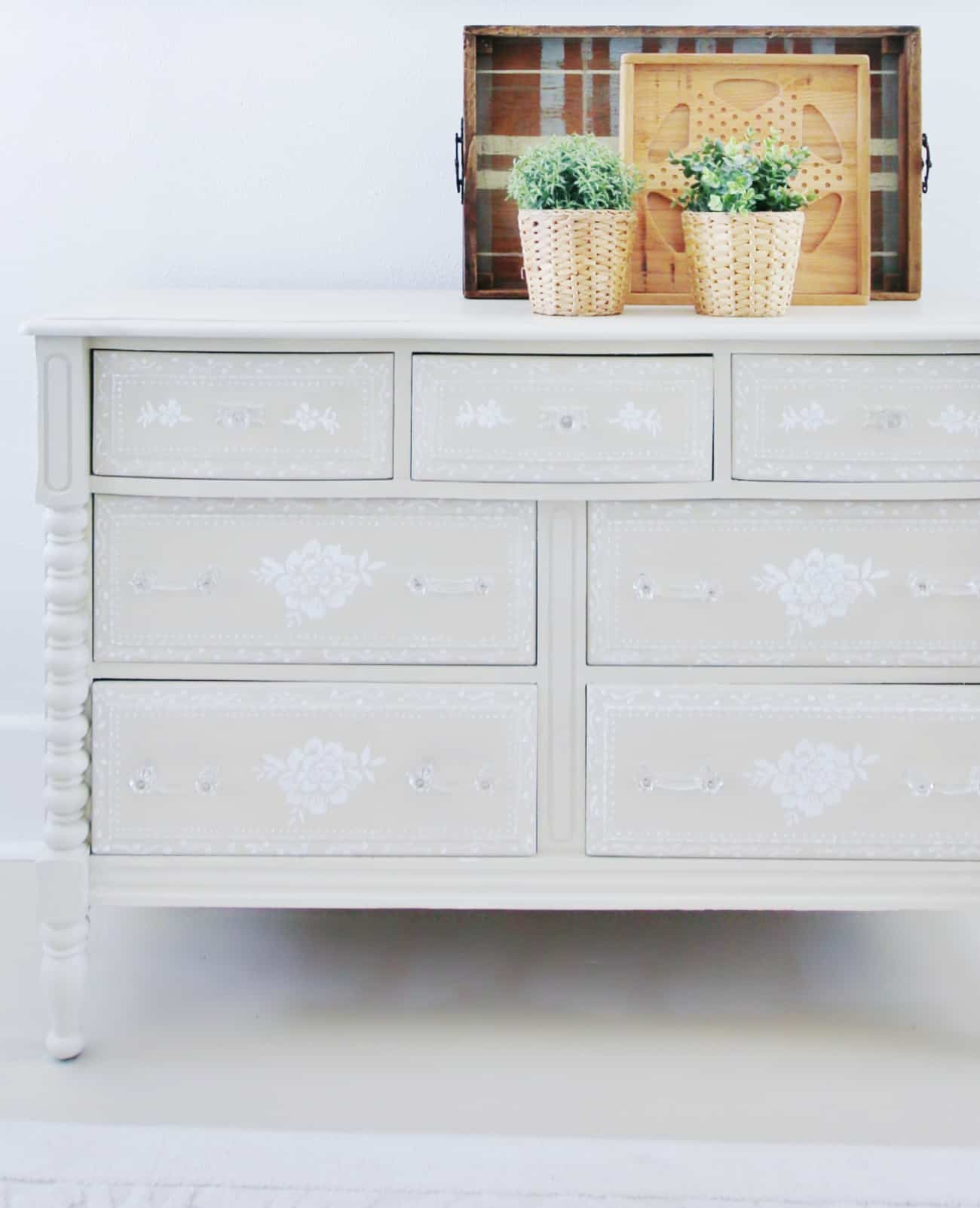 And here’s the after.

Isn’t she the cutest dresser you’ve ever seen?

And all it took was learning how to stencil wood, a little paint, and a lot of imagination.

I just have 16 more projects to go.