Step into any New England coffee shop on the coldest day of the year and, without fail, you’ll hear the clinking of ice cubes. Winter, spring, summer, or fall, New Englanders can be found with iced coffee in hand. What’s more, our iced coffee loyalties run deep: Everyone has an idea of who makes the best iced coffee in New England. 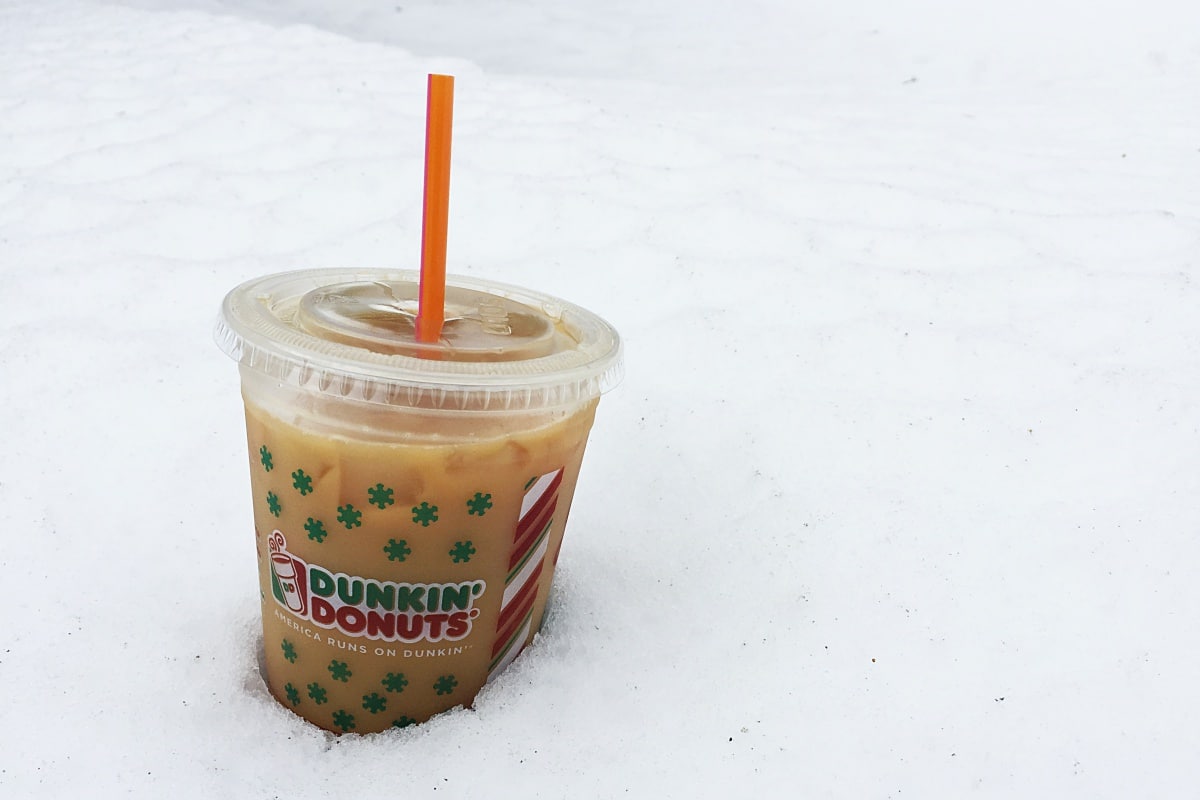 The New England way to keep an iced coffee cold.

Maybe you know someone who used to “double cup” (that is, put a Styrofoam cup around the iced coffee cup as an added layer of insulation) before Dunkin’ discontinued the practice, or you have a friend who trudges up to the office in a full winter parka getup, swirling an iced coffee in their mittened hands. Either way, you know that New Englanders have some unique iced coffee practices. And whether your loyalty lies with Dunkin’, Aroma Joe’s, or a slightly more hidden gem, there are plenty of New England shops that might convince even you to stray from your old standby. Looking for the cream of the crop? Here are our picks for the best iced coffee in New England.

The Best Iced Coffee in Connecticut

The antithesis to the clean-cut, minimalist coffee-shop aesthetic, this skate punk café in Middletown, Connecticut, serves a mean cup of coffee. The Perkatory Coffee Roasters website deems their brew “deathly delicious,” and with specialty beans roasted in small batches in-house, every week, we can see why. Their cold brew, nitro cold brew, and iced espresso drinks are no exception. In the mood for something even more exciting? Try one of their iced coffee sodas or their frozen, blended coffees.

Many coffee roasteries begin with a love for coffee; this Connecticut coffee shop began with a passion for beer brewing. Before venturing into small-batch coffee roasting, Steve and Lori Palauskas established the Connecticut Valley Brewing Company. It was while developing a coffee stout for the brewery that they found their love for craft coffee, and so Birdhouse Coffee was born. If you’re in the area, stop by for a cold brew. If you’re not, their bags of coffee (which are beautiful, to boot) are available for purchase online. 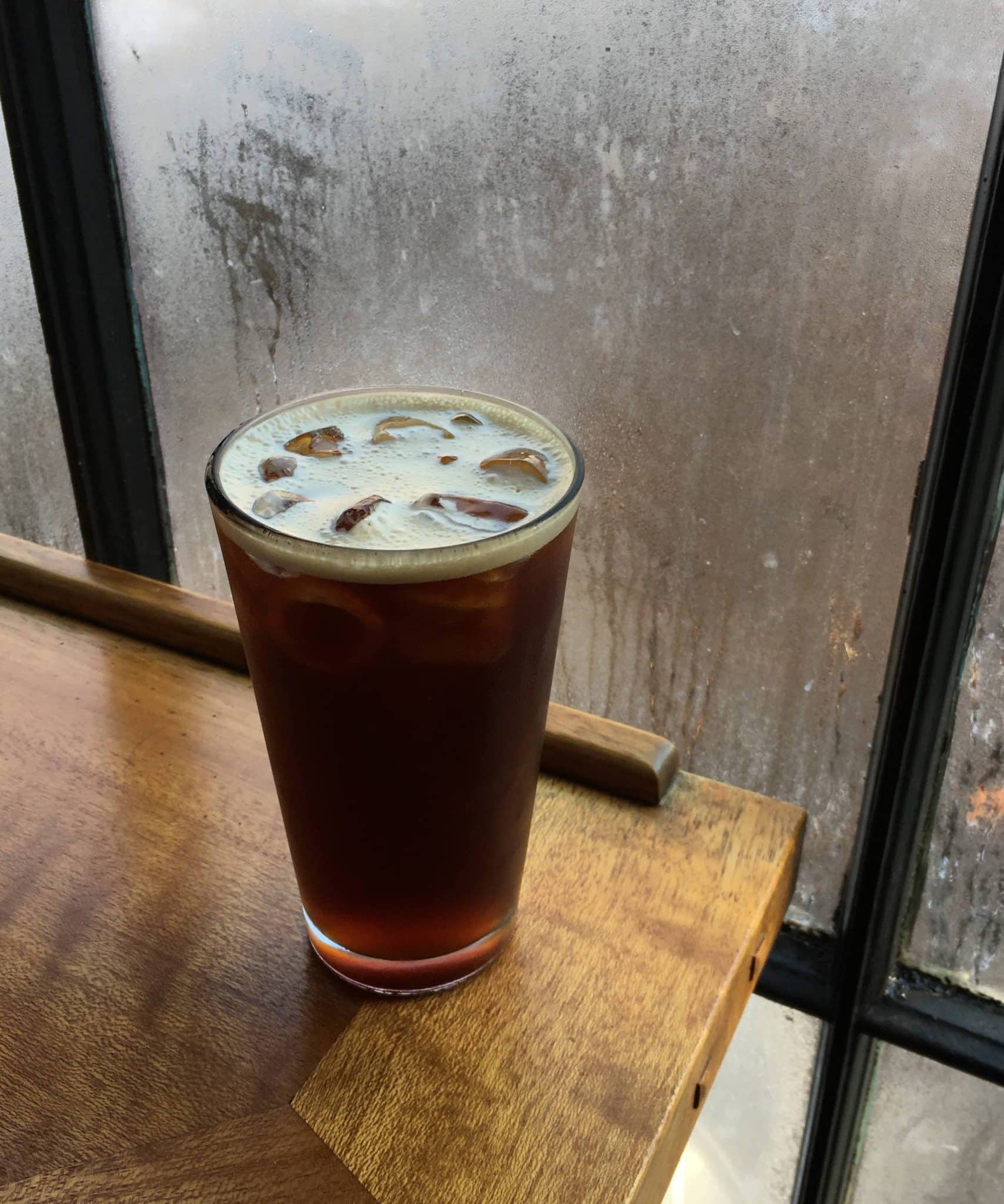 A foamy nitro cold brew made with Share Coffee beans at the Lady Killigrew Café in Montague, Massachusetts.

The Best Iced Coffee in Massachusetts

After one sip of coffee cold-brewed with these beans, the last thing you’ll want to do is share. Ethically sourced and roasted in Hadley, Massachusetts, Share Coffee was started by Ken Majka and has since expanded to multiple locations around western Massachusetts. Beans can be ordered online, and their killer nitro cold brew can be purchased in Amherst, Northampton, and Montague, Massachusetts.

With numerous flavors of cold brew, seven locations throughout the Berkshires and Pioneer Valley of Massachusetts, and a laundry list of breakfast menu items, this local chain leaves little to be desired. Many swear by their toasted coconut cold brew, while those looking for a more traditional experience will also enjoy their classic unflavored coffee.

Looking for the best iced coffee in Boston? Founded in 2017, Cambridge’s first specialty coffee roaster quickly made a name for itself on the Boston area’s coffee scene. And with expertly roasted beans, a strong commitment to conscientious sourcing, and a prime location near Harvard Yard, it’s no secret why.

Located just outside the charming city of Portsmouth and only a short drive from the beautiful beaches of Rye, this New Hampshire coffee bar ranks among the best of the best with their freshly roasted Colombian beans. After a year of home-roasting beans in his garage, owner Max Pruna opened the doors of La Mulita Coffee in 2019. Since then, they’ve been serving up delicious coffees, espresso, and an iced cold brew that would be the perfect sidekick to any beach day (or, dare we say it, snow day).

Horseshoe Café co-owner Nori Kozuma starts by sifting through the green coffee beans. One by one, he picks through them by hand. He searches for any imperfections — mold, cracks, things like that — which might possibly lead to a less-than-perfect cup. After roasting the beans, he repeats this process before grinding and brewing. With all this in mind, it’s no wonder that this unassuming little coffee shop in Newmarket, New Hampshire, has been recognized by Food & Wine as the best in New Hampshire and as one of the top 100 coffee shops in America. Though they are equally renowned for their exquisite baked goods, their cold brew is of the highest quality and is sure to put a pep in your step. 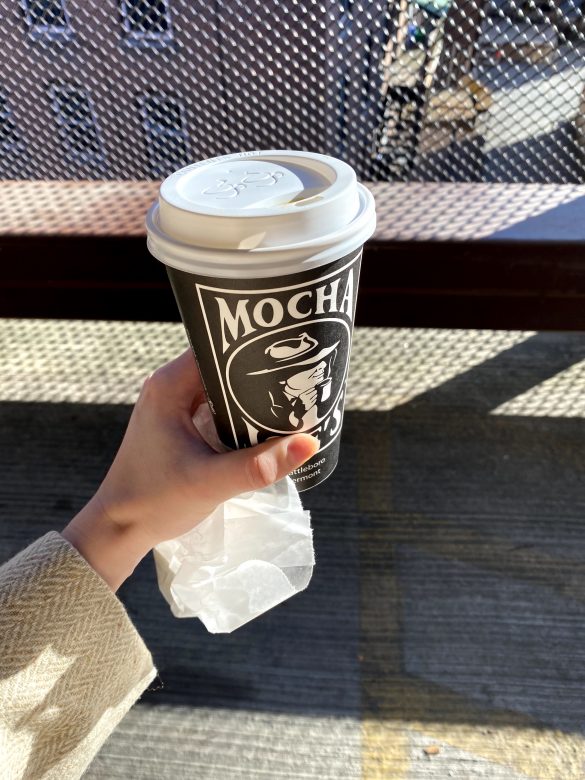 The Best Iced Coffee in Vermont

A few steps below the street in downtown Brattleboro, Vermont, sits longstanding coffee establishment Mocha Joe’s. Since Pierre Capy began roasting beans in 1994 the shop has gained a robust fan base; now Mocha Joe’s boasts over 100 wholesale customers throughout the Northeast and a wide range of organic, fair trade coffees to choose from. Whether you’re exploring Brattleboro on a sunny summer morning or just passing through on the way to the ski mountain, their cold brew coffee is guaranteed to start the day off on the right foot.

As cold-brew coffee and nitro cold brews have grown in popularity, so has the demand for shelf-stable and bulk options. Enter canned cold brew. At Abracadabra Coffee Co. in Woodstock, Vermont, single-origin canned cold brews offer convenience without compromising on flavor. From their rich and creamy classic cold brew to their juicy, hemp-infused coffees, cracking open one of these cold cans is sure to kick-start your day. 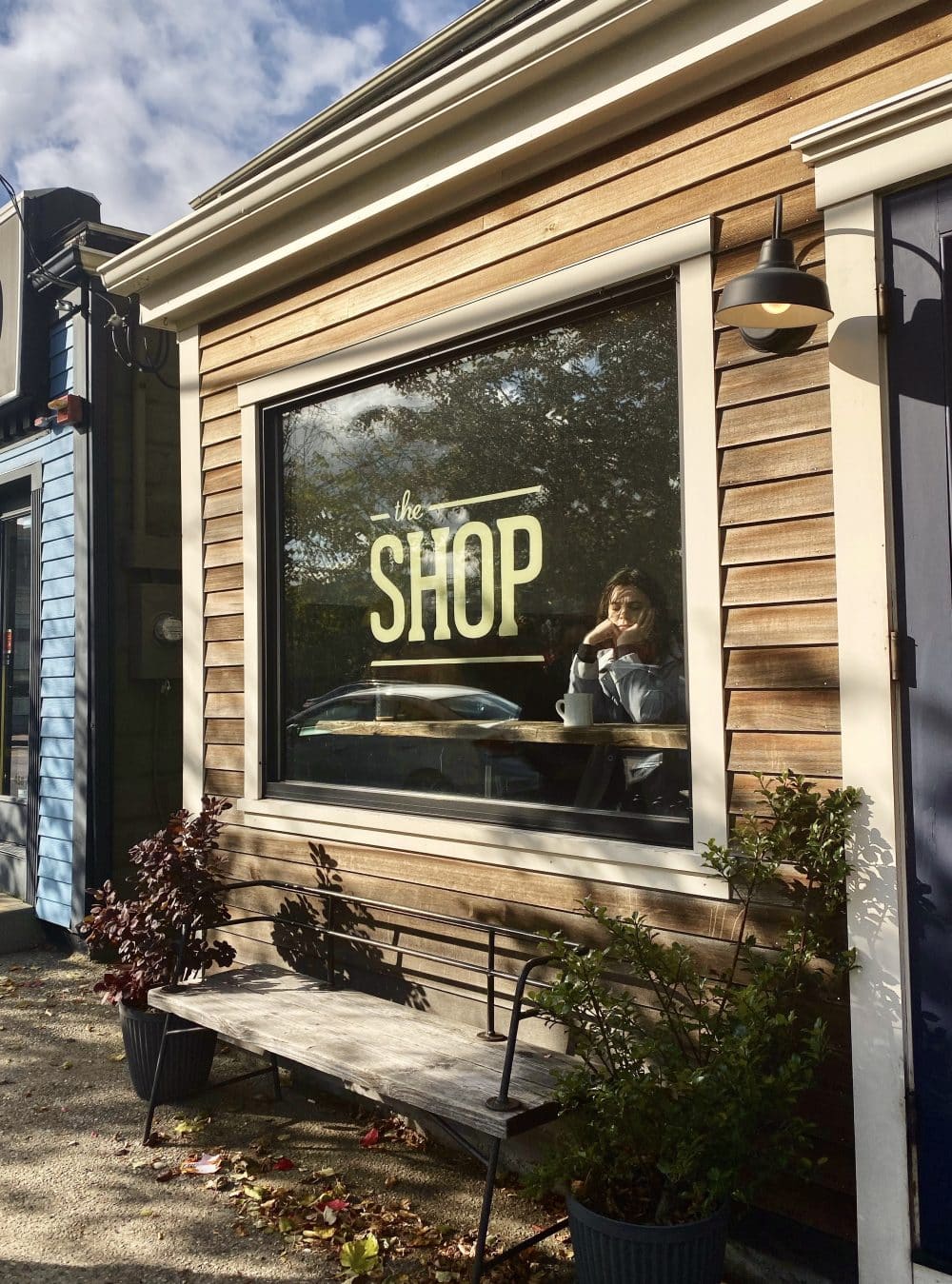 Attention to detail is the name of the game at this charming Providence, Rhode Island, coffee shop, tucked away in the waterfront Fox Point neighborhood. The smell of freshly brewed, single-origin coffee hangs in the air and light streams through expansive windows. Customers chat quietly as friendly baristas serve up steaming mugs and snack-worthy platters. From the thoughtful interior design touches to the carefully curated food and drink menu, The Shop delivers on experience from start to finish. If you’re lucky enough to snag a spot by the window, you’ll have a perch perfect for sitting, sipping, and watching Providence go by. If not, it’s the perfect place to grab a delicious nitro cold brew before hitting the town.

“Think Guinness for your coffee,” declares the website for this Rhode Island coffee joint. Locally sourced, cold brewed, and nitro tapped, this iced coffee isn’t like the iced coffee of yore. It’s creamy, it’s delicious, and it’s ice cold. And while many locations on this list offer nitro cold brews, this place specializes in it. With two brick-and-mortar Nitro Bar locations, three cold-brew coffee carts and over 50 nitro cold-brew taps in regional restaurants and businesses, Nitro Cart’s coffee community has quickly grown from a basement venture to a full-blown nitro craze. 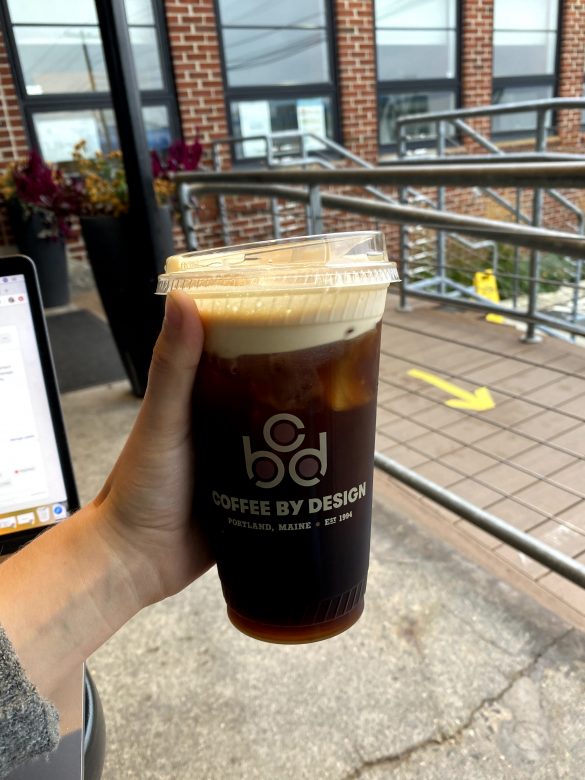 The Best Iced Coffee in Maine

Since 1994, Coffee By Design has been one of the cornerstones of the Portland, Maine, coffee scene. What started as an effort by owners Mary Allen Lindemann and Alan Spear to share their passion for excellent coffee with the greater community ultimately played a large part in revitalizing Portland’s downtown Arts District. Meanwhile, the shop itself also blossomed into something much more grand. They now operate three locations in Portland and one in neighboring Freeport, with Coffee By Design’s coffee beans distributed globally to nearly 600 wholesale and mail-order customers. Pop by for an iced coffee — you won’t be disappointed.

Nestled into a 1930s brick building in Portland, Maine, Tandem Coffee Roasters has been roasting and brewing coffee since they first opened their doors in 2012. Baked goods are also served at their second location in Portland’s West End, housed in a building that was both a gas station and a laundromat in its past lives. Basically, all of this is to say that Tandem Coffee Roasters not only has great coffee, but great food and great character to boot, making it the perfect place to grab an iced coffee and stay awhile.

Looking for some of the best iced coffee in Portland’s historic Old Port neighborhood? Look no further than Bard Coffee, which has been serving their in-house roasted coffee since 2009. Their team is highly trained, committed to ethical sourcing, and always on cutting edge of roasting technology. Oh, and did we mention the coffee is out of this world? And if one cup of their signature cold brew isn’t enough, you can even take it to go in one of their “Extra Grande” 64-ounce jugs. Yes, please!

Do you agree with our picks? Which coffee shop or roastery do you think serves the best iced coffee in New England?

Best 5 Spots for Coffee with a View in New England