Tracy Clark--It Only Takes One Person to Believe In You

DEBORAH CROMBIE: Sometimes the perfect post comes along at the perfect time. I was feeling in need of a little (or a lot) of a boost in writers' mojo, and when I read today's piece from the wonderful Tracy Clark, I was inspired. Such wonderful advice, and such a moving tribute to Eleanor Taylor Bland.

IT ONLY TAKES ONE PERSON TO BELIEVE IN YOU 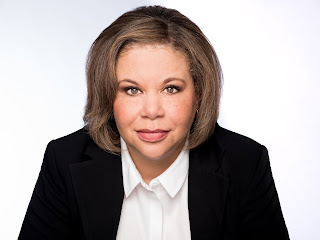 Writing is a lonely endeavor. There’s not a soul in that writing room with you as you stare at that blank computer screen, its cheeky cursor blinking at you as if to say, “okay, (insert air quotes here) F. Scott, whatcha got?”

On good days, you’ve got lots. On bad ones, yikes. Knowing you’re a part of a writing community helps on those bad days. You have friends, pals, who know that lonely room, they’ve seen that cursor blinking. They feel your pain because it’s their pain too.

For writers, I think, there is a constant worry that what we’re writing isn’t good enough, that we’re not getting all we can out of a character or a plot line or a chapter. That even after a few books we have no idea how to write the next one. That writing is a knack or a fairy gift that will dry up and blow away at the stroke of midnight … on your birthday.

But writing’s not at all magical. It’s craft, it’s talent, it’s a vocation for which you can become increasingly proficient through hard work, persistence and downright stubbornness.

A lot of writers are shy and introverted. I’m shy. I spent part of my first Bouchercon sitting behind a potted palm in a St. Petersburg hotel. Not all day, I’m not a complete hermit, just in 10-to-15-minute spurts, just long enough to recharge before diving back into the fray. Some of you might have seen me at the palm. I named it Stanley. I sat on author panels there and sweated. I met people. I liked it. I was exhausted at the end of the four days.

I knew I wanted to write early on, and so I took advantage of every writing course I came across starting freshman year in high school and running all the way through my thesis presentation. If there was a writing workshop available in my area, I took that too. I gobbled up knowledge on pacing, dialogue, character building, world building, setting, voice, point of view, all of it, stuffing it all into my memory bank. At these workshops, I would stare at all the published authors leading the sessions thinking they were just the smartest things walking. I wanted to be like them, to know what they knew, and I was determined to get there if it took me a thousand years and a valued limb.

I met Eleanor Taylor Bland at one of those all-day workshops. I was still in college, still struggling with my writing, still not getting “it.” She was a force of nature. I watched in awe as she moved through the room with such confidence and determination. She knew everyone and everyone knew her. I sat in on her sessions, taking copious notes. I sat in the back, too shy to sit in the front where she might see me. She had no idea I had the latest Marti MacAllister novel in my bag and that I was too shy to ask her to sign it.

But she saw me. How could she not? I was the only other Black woman in the room. In fact, for a few years, I only saw a handful of Black women (one man) at the entire workshop. Eleanor approached first. She wanted to know who I was and what I was writing. I stammered, began to sweat. I think I was speaking English.

Eleanor latched on and led me along with her. She pointed out the sessions I should sit in. “Go to that one. She’s good. You need that information.” So I went. And Eleanor was right. She introduced me to people (published writers) I never would have approached on my own.

One year, I came back with manuscript pages. Eleanor was there. She did the same thing as the year before; this time there was one more Black writer there. We followed behind her as she worked the rooms like a pro. She called us her little chickens. She was our Pied Piper.

Eleanor read my manuscript pages one year. While she read, I agonized, finding a spot on the wall to focus on, nervous about what she might say. She was a real writer. Real writers know junk when they read it. The Eleanor Taylor Bland was reading my junk! I wanted to crawl into a ball and die. 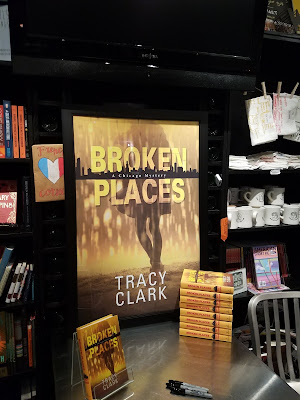 She finished. Her head popped up. She looked at me for a half-second, then said. “Good. This is good.” She said some other stuff, but I didn’t get most of it. I got hung up on the “good” part. She said it was good? I would have danced on the ceiling, if I could have reached it. Then she said it. The two words that I hear in my head today and every day when things are going well, but particularly when they aren’t. Keep writing. Keep writing. Keep writing.

Those two words got me through more than twenty years of rejection letters. They got me through getting an agent early on and losing him two years later when he could find no takers for the early version of my first Cass Raines novel that would eventually become “Broken Places.” The two words get me out of countless muddled middles now. Whenever I get stuck – it’s keep writing. Whenever I feel I’ve gotten to the end of what I can do – it’s keep writing. Whenever I’ve spent an entire day writing and I know in my bones I’ve just spent an entire day writing crap I cannot use – it’s keep writing.

I finally got my Marti MacAllister book signed. I also got Eleanor’s phone number and email address after that first manuscript critique. She wanted to check on my progress, see how my story was coming along. She offered her help when and if I ever needed it. I needed it. We talked on the phone on occasion, but she was far too busy for chitchat, so we mostly emailed back and forth until she got too sick to do it. It was a good day when I had an Eleanor email waiting in my inbox. I’ve saved those emails.

She called me at work once and left a message on my voicemail. She called my writing “impressive.” I saved that voicemail too until the job changed phone systems and the message got deleted. I would play that message every morning when I sat down at my desk. It motivated me and kept me on track. If Eleanor believed I could write, it was easier for me to believe it too. I wish I had that message back.

Eleanor called me on a Saturday morning once and told me to get dressed and meet her downtown. Walter Mosley was doing a signing at the bookstore on State Street. Words cannot adequately describe the panic that call sent through me. It had taken me two years to talk to Eleanor without fainting dead away and now she wanted to introduce me to Walter Mosley? Walter. Mosley. I went. Of course, I went. You did not say no to Eleanor. I had my picture taken with Walter Mosley that day. Eleanor took the photo, and I could see her grinning behind the camera. Eleanor and I had lunch afterward, but I have no idea where or what I ate. A week or so later, she mailed me a copy of that photograph. Walter Mosley had signed it. I looked like a deer caught in headlights. I still have that photo.

I got my first writing credit through Eleanor. She asked me to write a short story (my first) for an anthology of Black mystery writers she was putting together titled “Shades of Black: Crime and Mystery Stories by African-American Authors.” Penny Mickelbury was in that anthology, so were Walter Mosley, Hugh Holton, Chris Chambers, Frankie Y. Bailey, Grace Edwards, Gary Phillips. What was she thinking? No way was I good enough to be in that kind of company! But there I am. If you check out the book cover, you’ll see me. I’m listed as “and others,” and I’ll gladly take it any day all day. 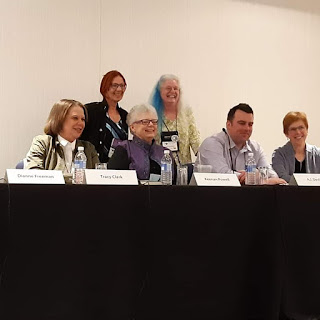 Tracy as a Best First Novel nominee, the Lefty Awards in Vancouver

Sometimes angels appear right when you need them.

Writing is a lonely endeavor. It’s just you in a room with a blinking cursor until someone, some force of nature, plucks you out and shoves you toward community. I pray every new writer out there finds such a mentor, such a friend. I miss Eleanor’s emails. I miss her voice. I wish she could see what I’m doing now and know that she played a tremendous role in it. I think she’d be happy about it.

So, if you’re a new writer out there and you’re finding the road rough and full of obstacles, I’ll tell you what Eleanor told me – KEEP WRITING.

If you’ve been writing for years and are in a position to impart some wisdom or keep a new writer going, reach back and make that connection. I honor Eleanor’s belief in me, her friendship, by paying it forward. 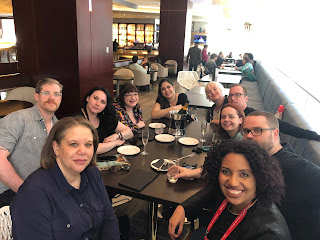 Tracy (left) and friends in Vancouver

None of that means you won’t find me skulking behind a potted palm at some big conference, though. Still shy, but, by all means, say hello. I’m friendly. But if you’re also shy, you’ll have to find your own palm. Stanley’s mine. 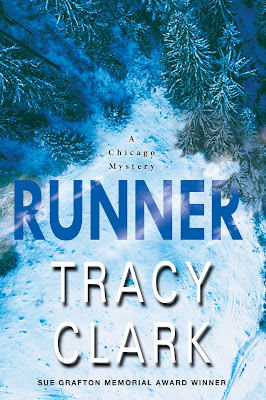 Tracy Clark is the author of RUNNER: A Chicago Mystery (June 29, 2021; Kensington) and three additional novels in the Cassandra Raines series. She is the winner of the 2019 Sue Grafton Memorial Award, an Anthony and Lefty Award finalist, and her books have been shortlisted for the American Library Association's RUSA Reading List, named a CrimeReads Best New PI Book of 2018, a Midwest Connections Pick, and a Library Journal Best Books of the Year selection. A native of Chicago, she works as an editor in the newspaper industry and roots for the Cubs, Sox, Bulls, Bears, and Blackhawks equally. She is a board member-at-large of Sisters in Crime, Chicagoland, a member of International Thriller Writers, and a Mystery Writers of America Midwest board member. She is currently a finalist for both the Agatha and Shamus Awards for Best Mystery of the Year. You can visit Tracy online at tracyclarkbooks.com

Chicago in the dead of winter can be brutal, especially when you’re scouring the frigid streets for a missing girl. Fifteen-year-old Ramona Titus has run away from her foster home. Her biological mother, Leesa Evans, is a recovering addict who admits she failed Ramona often in the past. But now she’s clean. And she’s determined to make up for her mistakes–if Cass can only help her find her daughter.

Cass visits Ramona’s foster mother, Deloris Poole, who is also desperate to bring the girl home. Ramona came to Deloris six months ago, angry and distrustful, but was slowly opening up. The police are on the search, but Cass has sources closer to the streets, and a network of savvy allies. Yet it seems Ramona doesn’t want to be found. And Cass soon begins to understand why.

Ramona is holding secrets dark enough to kill for, and anyone who helps her may be fair game. And if Ramona can’t run fast enough and hide well enough to keep the truth safe, she and Cass may both be out of time.

DEBS: What a fabulous story! REDS and readers, has there been someone who's encouraged you the way Eleanor encouraged Tracy?