What is Aquavit? A Guide to the Scandinavian Spirit 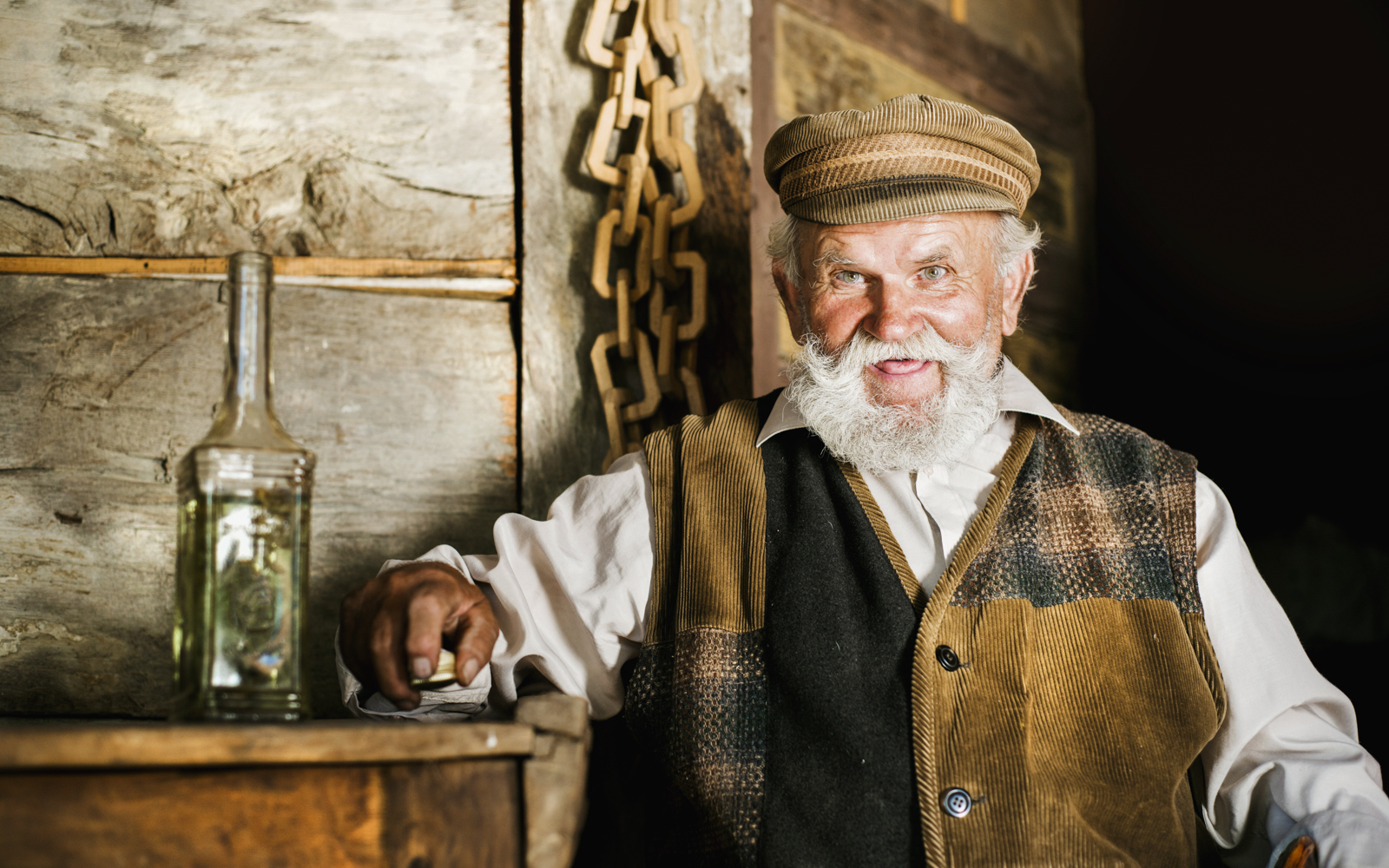 Found yourself at a julefrokost, staring down a shot glass, and asking yourself “What is aquavit and why does it taste like this?” You’re not alone.

We’ve put together a helpful guide to aquavit in each Nordic country, including the history of aquavit, how it’s made, and how to drink it:

If the Nordic countries had a single, signature drink it would undoubtedly be the spirit aquavit. Aquavit comes from the Latin aqua vitae, or “water of life,” which is kind of ironic since it tastes like liquid fire.

German traders brought aquavit to Scandinavia in the 1400s, where it was initially used in medicine and gunpowder. Pretty quickly though, the Scandis acquired a taste for the stuff, and aquavit became integrated into Nordic customs, traditions, and culture. So, what is aquavit?

Essentially, it’s a vodka- or gin-like spirit. By EU decree, aquavit must be distilled with caraway or dill and should have a minimum alcohol by volume of 37.5%, though 40% is usually the average. Whether the aquavit started with potato or grain depends on the country, as does color, flavor, and how it’s consumed. Aquavit is a lesser-known spirit that’s now making waves outside Europe, Skål!

In Denmark, Danish aquavit is known as snaps – though, technically, not all snaps are aquavit. Snaps have been a part of the Danish diet for hundreds of years, so when King Christian III decided to tax it, Danes countered and began distilling their own aquavit at home.

In the 1800s Denmark was estimated to have 2,500 legal distilleries and countless more were home brewing “off the books.” Today, the production of the Danish aquavit has largely been consolidated but a handful of artisanal distillers have popped up in recent years.

What makes Danish snaps different from some of its Nordic neighbors is that it’s usually made from grain and has a light, if not clear, color.

How Do Danes Drink Snaps?

Cold and usually with a traditional smørrebrød lunch of pickled herring. In Denmark, snaps are served as a shot and typically sipped. Well, at least until the alcohol kicks in. You’ll find that Danish snaps always makes an appearance for Easter and Christmas lunches, anniversaries, birthdays, and other special occasions.

Fun fact: Snaps and beer go together like peas in a pod. Danes typically drink them together. It’s called a sæt.

The Granddaddy of Danish snaps, Aalborg’s table aquavit is arguably the best-known snaps in Denmark. You can even make your own infused spirit with their Aalborg Basis Snaps. It’s a neutral grain aquavit and it’s perfect for steeping your favorite fruits and herbs at home.

An award-winning dill aquavit that reimagines the classic Danish spirit. It’s also flavored with green anise and lemon for a sharp and spicy taste. They also have a special edition Mulberry Rose.

An artisanal Danish snaps made from organic wheat. It’s distilled on the Baltic island of Bornholm and even comes in TSA-approved travel sizes.

Unlike the aquavit found in other parts of Scandinavia, Norwegians like to distill theirs with potatoes as a base. By law, 95% of the potatoes in Norwegian akevitt must come from Norway and, depending on the classification type, must be aged in barrels for at least six or 12 months.

Linie is the most famous brand of Norwegian akevitt and for good reason, its backstory is quite amazing. Linie akevitt matures in oak casks stored in the hull of a ship that crosses the equator not once but twice! This idea of aging the spirit at sea goes back to 1805 when Catharina Meinke Lysholm sent some potato liquor to sell in Indonesia. No one bought the barrels and when the ship returned two years later the Lysholm family discovered that the liquor had changed. They spent the next two decades perfecting the maturation technique and the robust Linie akevitt was born.

How Do Norwegians Drink Snaps?

Norwegian “line aquavits,” those that cross the equator, are sipped like a glass of cognac or whiskey at room temperature or slightly below. Akevitt is a must-have for Easter, Christmas, and Norway’s Constitution Day to counterbalance the traditional pungent cheeses and pickled or fermented fishes. Norwegians also have their own aquavit-inspired cocktail. It’s called a fjellbekk or “mountain stream” and is made with aquavit, vodka, lemon, and lime.

Fun Snaps Fact: Christopher Hammer is considered to be the father of Norwegian akevitt for his books on how to store potatoes and distill the spirit from their mash. Ironically, Farmer Hammer was a self-proclaimed avholdsmann, or “abstainer,” meaning that he didn’t drink alcohol.

The Norwegian “line aquavit.” Linie’s amber akevitt is matured over a four-month journey from Oslo to Sydney and back.

OHD is a craft distiller in the heart of Oslo. Their collection of akevitt is fresh, fun, and with foraged Norwegian botanticals.

The packaging alone makes this a gorgeous addition to any home bar. Batches are small and some flavors are limited editions like the six-year-old smør akevitt.

Brennivín is the Icelandic version of aquavit. You may have heard of it before. It’s been dubbed the “Black Death.” The spirit earned its nickname in the 1930s during prohibition when a partial repeal allowed Icelanders to drink hard spirits, wine, and weak beer. However, to discourage the populous from indulging in drink, the government put an ominous black label on the bottle. It had the opposite effect and brennivín became an Icelandic hit. It’s become the island’s beloved national liquor.

Unlike other Nordic aquavits, caraway and cumin dominate Icelandic brennivín which, similar to Norwegian akevitt, is also distilled from potatoes. Many owe brennivín’s subtle sweetness to Iceland’s pure, soft water. It contains no added sugar or anise; even if your taste buds say otherwise.

How Do Icelanders Drink Brennivín?

Neat or as a substitute for gin, rum, or whiskey in a cocktail. Brennivín is also a celebratory shot and the (unofficial) drink of Þorrablót – the Icelandic midwinter festival.

Fun Aquavit Fact: Hákarl, Iceland’s infamous dish of fermented shark, is washed down with a shot of brennivín. Imagine chasing slightly putrid shark with a glass of burning liquid…

Branded as the “Original Icelandic Spirit,” Ölgerðin’s brennivín has retained the same packaging meant to deter consumers a century ago.

Finns tend to be more vodka and Koskenkorva – a grain alcohol that falls somewhere between vodka and aquavit – drinkers, but Nordic aquavit is starting to stake a national claim. Ironically, Finland is the largest producer of caraway in the world but only started distilling aquavit commercially within the last decade. In 2014, the Helsinki Distilling Company launched its craft Helsingfors Fiskehamns Akvavit. It was Finland’s first local aquavit and the first distillery in Helsinki in over a century.

How Do the Finns Drink Akvavit?

Cold and in copious amounts from July to September during their annual crayfish parties, kräftskiva; a tradition brought over by Swedo-Finns.

Fun Fact: There’s a story in Finland about an aquavit cocktail named after Baron Carl Gustaf Emil Mannerheim, a Finnish military leader, statesman, and former president. The cocktail is called marskin ryyppy, or “marshal’s shot,” and was created during World War II after Mannerheim requested something be done about the poor-tasting vodka. There’s an ongoing debate about what was in the drink, but it was most likely a mixture of aquavit, gin, and French vermouth.

HDCo’s Helsingfors Fiskehamns Akvavit is a spicy aquavit that’s matured for weeks in French oak and hand-bottled in their Oslo distillery. They recommend that you serve it chilled.

Aquavit is known as brännvin in Sweden, but you’ll usually hear it referred to or written as snaps. Aquavit was first documented in Sweden in 1467, when it was cited in instructions for lighting gunpowder. By the 16th century, Swedes everywhere were, well, getting buzzed off snaps, and grain-based versions were being distilled in all major cities. Despite efforts by the Swedish crown to restrict or monopolize its production, snaps only grew in popularity. It’s estimated that Sweden produced upwards of 100 million liters of snaps annually in the 1830s. At the time the country only had 3 million people.

Improvements in technology and the wider availability of raw potatoes brought about more varieties of higher quality Swedish snaps in the 1800s.

How Do the Swedes Drink Snaps?

Chilled and preferably from a tulip-shaped glass. You’ll see it everywhere at festivals, parties, and other special occasions like Midsommar, Christmas, and the annual crayfish all-you-can-eat.

Fun Fact: Swedes love to sing before taking a shot of snaps and the Vin & Sprithistoriska Museet in Stockholm documents this joyous tradition. Since 1992 they’ve amassed a collection of over 12,000 Swedish snapsvior, or “drinking songs,” and hold competitions every year to ensure new ones are added to the list.

Sweden’s oldest and best-selling aquavit. It made its grand debut in 1891 at the Gothenburg Exhibition Fair.

A family-run farm, brewery, and distillery in western Sweden. Their snaps and beers are crafted to complement various dishes.

A spicy aquavit named after Swedish writer Torgny Lindgren’s 2007 novel. It contains a splash of sherry and has a bright amber color.