Who Knew ‘Interesting Times’ Would Be So Boring?

“I’m definitely feeling the boredom,” says Dana Attari, who’s been in isolation with her fiancé in California for, well, about as long as the rest of us have been sheltering in place alone or with our own partners or kids or roommates or animals. My friend Emma Karin Ericsson, who lives alone in New York City, lately refers to herself as the “estranged aunt” of the pigeons nesting on her windowsill. It’s been long enough that time has begun to feel elastic, and wild birds have become family, and many of us have experienced what Dana describes as “the discomfort of facing too much of myself.”

It’s a common yet startling paradox that the eras we classify as “interesting times” typically consist of many dull days. Even in the thick of World War II, the veteran Paul Fussell writes, soldiers learned to fill their free time with naps because “sleep devoured boredom.” As apocalyptic as our own epoch may sometimes seem, it’s also largely defined by static surroundings, long lines, and—particularly for nonessential workers and kids—unprecedentedly unstructured time. In a survey published in Italy at the end of March, after the populace had been sheltering in place for about a month, people named boredom as one of the most difficult aspects of their prolonged isolation, second only to lack of freedom.

This ranking makes sense to me. Boredom is incredibly uncomfortable. Commonly experienced as irritable restlessness, boredom is something people will go to great lengths to avoid—in one study, most people chose to self-administer electric shocks rather than sit alone with their thoughts for six to 15 minutes. In this sense, boredom is a motivating force, which is how researchers differentiate it from depression.

[Read: All the cozy little things keep me going]

People are so motivated to avoid boredom that they’ll often take unfortunate shortcuts to do so. In The Music Man, Harold Hill cons a whole town just by insinuating that boredom will lead its citizens’ sons to play pool, and from there head down a slippery slope to booze and consorting with “scarlet women.” Restless in self-isolation, you might take a similar trajectory toward bad habits: eat snacks you’re not hungry for, check your phone 800 times, drink too much (happy hour, in fact, was a Navy invention to give sailors a break from the monotony of life at sea), pick a fight, and finally post about it all online, perhaps set to Tyga and Curtis Roach’s painfully catchy quarantine anthem, “Bored in the House.”

If you haven’t done any of these things over the course of social isolation, I’d wager you’ve at least had to deal with someone who has. Arlene Soto, who’s raising seven kids in Brooklyn, told me that she recently had to ban the floor game Twister after it devolved into a wrestling match between her stir-crazy sons. “Their energy,” she said, “is at a thousand.”

Boredom spurs people to do dumb things because it makes them itch to do something, anything, other than what they’re actually doing at the moment, whether that’s working from home or going to school at home or exercising at home or … well, we’re home a lot these days. Such itchiness is what makes boredom so difficult. It’s also what makes it great.

Boredom happens to us for a reason. The mood is highly correlated to feeling trapped—in a dead-end job, a community we don’t connect to, or even just a crappy conversation—so our experiencing it in mandated seclusion makes sense. Boredom’s “itch” is how our brain alerts us to the fact that we’ve lost the sense, even temporarily, of being the protagonist in our own life. “Boredom is an emotional signal that makes people very aware that in their current situation there is a lack of purpose,” the social psychologist Wijnand Van Tilburg told me when I interviewed him for my book about boredom. “This annoying feeling is actually a sophisticated alert system, a sort of inner (and free!) life coach tapping us on the shoulder to suggest that we might want to change something.”

Unfortunately, we can’t always improve the situation right away. Finding a new job or making a new friend takes time and effort; when it comes to sheltering in place, staying put is a moral imperative, even when it doesn’t feel good. Plus, achieving any kind of real life change almost always involves aspects beyond our control, whether we’re waiting for an email response or waiting out a recession. Seeking a quick fix in some kind of diversion is easier, and at least temporarily satisfying. Nothing is inherently wrong with this—sometimes you’ve got to blow off steam via, say, an episode of Terrace House (my chosen boredom therapy, ironically, as the show has been described as “hypnotically boring”). But boredom serves its purpose only when we don’t immediately quash it, when we take a beat to see where our mind goes when it’s trying to evade the feeling.

A wandering mind can do so many things. You might have an idea for a creation; Oliver Jones, a 10-year-old in Kansas City, told me about a quarantine-themed board game he had devised—“It’s kind of like Life,” he said, “except it’s just stuff that happens at home.” You might have a realization about where you want to go in your career, or decide to reconnect with an old friend. Or you might finally burst, panting and triumphant, through the mental block that was keeping you from engaging in the task at hand. When it comes to writing, for example, F. Scott Fitzgerald claimed, “You’ve got to go by or past or through boredom, as through a filter, before the clear product emerges.”

[Read: We need to stop trying to replicate the life we had]

Or maybe, cooped up and slaphappy, you find fresh joy in known quantities. Max St. John and Parker Adel, roommates who live in Brooklyn, have developed a series of characters they drop into throughout the day, including “guy who turns any given topic into a bad stand-up impression.” And my sister, Madeline Catanzarite, in northern Indiana, bonded with her kids over a mutual dislike of forced crafting. “We tried to make hearts to tape to the door—everyone in the neighborhood was doing it,” she told me. “So we’re making these crappy hearts and the girls lost interest pretty quick, and I think we were all frustrated. Then my son said, ‘These look like butts.’” They ended up having a pretty good afternoon, taping butts to the front door together.

That’s the thing about boredom—you can’t just banish it with a craft project or a TV show, because it was never about a lack of activities in the first place. As my mom would tell me when I complained about being bored as a kid, there’s always something to clean. To shake the feeling, we have to cope with the discomfort of facing ourselves, in order to find the things that actually engage us. Boredom is an opportunity to grow through getting to know yourself better, to see new facets of old faces, and to be surprisingly delighted by sameness. 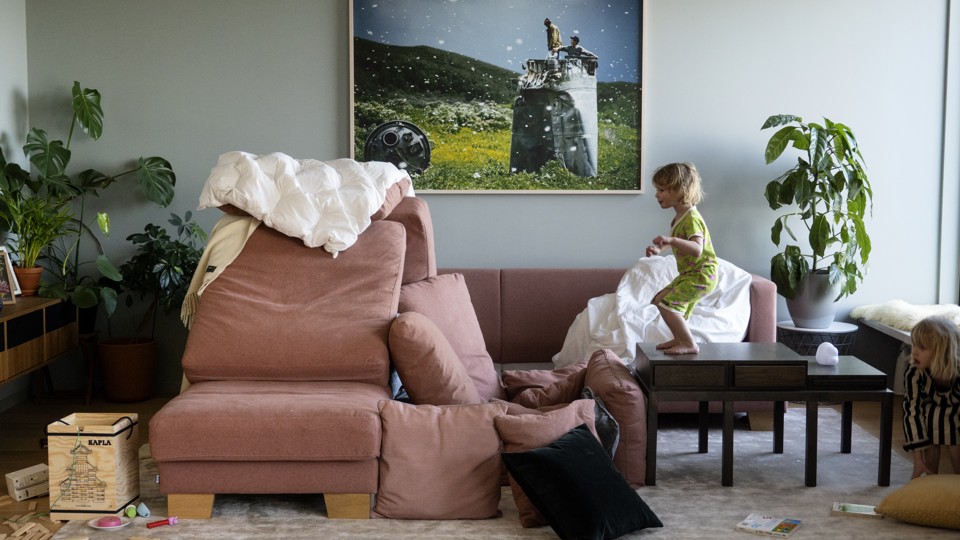