$20 vs. $200 Scarves Style Hallmarks of a Quality Mens Scarf

When its cold outside, its tempting to think of a scarf merely as a way to keep your neck warm, however, it is a fantastic way to add some color, patterns, and just some visual interests to your outfit, overall. Of course, a scarf must not just be beautiful but also functional and warm. Even though it might not seem like it from the outset, a $20 scarf is very different in terms of color, pattern, material, length, and especially, the details. So today, we got a $20 scarf from Target and were comparing it to a $95 scarf and a $195 scarf.

When I was looking for $20 scarves, I noticed that most of them come usually in shades of black or grey. For scarves, the big problem with black, gray, or other dark colors like navy, is that generally, most peoples outerwear such as their overcoat or their pea coat are either black, gray, or navy. So if you have a scarf in the same color, theres not enough visual contrast to make it for an interesting outfit. You want a special color, lets say, a burnt orange, maybe a nice yellow, or something green.

With a less expensive scarf, you can look for a long time, they usually dont exist. On the other hand, more expensive scarves usually come in much more sophisticated color palettes. There is a much broader range and theyre just warm unusual colors that are contrasting to your general outerwear. Of course, when patterns are involved, theyre usually multiple colors that are all designed in a way so they work well together but they make it incredibly easy for you to combine them with other colors and their accessories. What accessories, you might think? Well, especially gloves, and maybe a hat because when its cold outside, thats what you need. 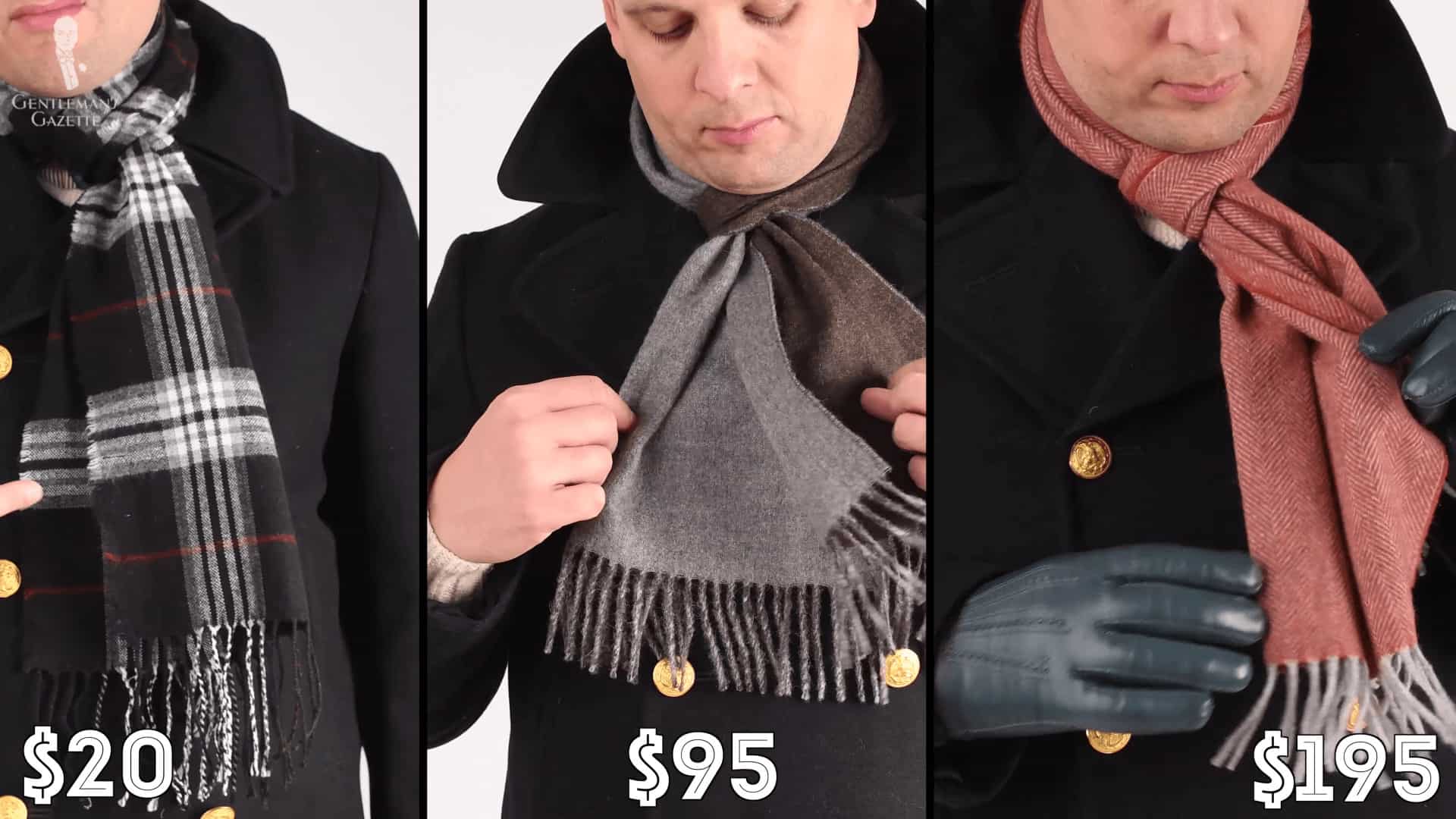 Other than the color, the pattern is also really important for a scarf. I would say standard scarves are just plain solids but even the weave can have an impact on how its perceived. In my experience, most cheap scarves come either in a solid color such as the black, gray, navy, sometimes maybe red, and if they have a pattern, its usually some form of a check pattern. This is somewhat inspired or copied from a Burberry scarf.

In my research, most cheap scarves dont seem to have a sophisticated color palette, theyre just all mixed together in a way with white, sometimes red, and thats about it. Theyre also mostly designed as scarves for women which means theyre oftentimes why theyre sometimes thinner and also a little bit shorter. Even if theyre designed as a unisex scarf, they are never made specifically for men which means they dont really work 100% for men. Overall, theyre just bland and at best, functional. 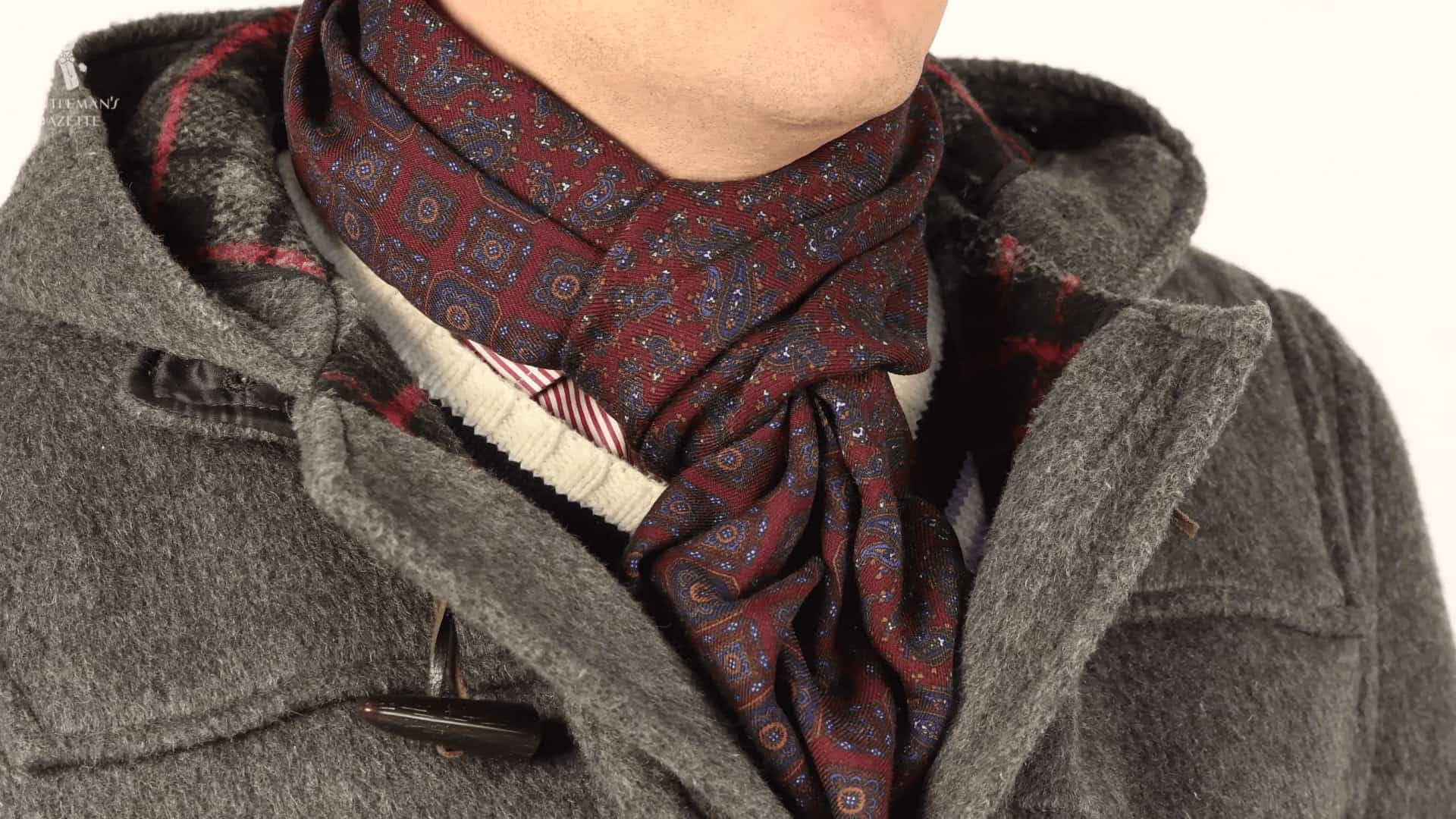 On the other hand, if you invest in a more expensive scarf, you get really cool patterns that could be a bold or classic paisley, it could be micro patterns that you may know from a tie but theyre slightly scaled up because for outerwear, thats what you typically see. They are designed in a way that it works well with typical overcoat patterns such as a herringbone pattern, for example. Sometimes, they also come in small micro checks or bolder stripes so even if you have a striped overcoat, the scarf will still work with it very harmoniously.

Also, while $20 scarves have the same pattern on each side, more expensive scarves, oftentimes, come in a tubular design so you have different patterns, sometimes also colors on each side. You can also play with materials and have, lets say, a silk side on the one side and a wool or wool silk blend on the other. Or alternatively, its woven in a special way so you have different colors on each side. For example, a $95 scarf from Fort Belvedere which is woven in alpaca. Its rather thick, keeps you really warm but when you tie it around your neck, the different colors on each side just create a very nice visual interest but you dont always have to show it to others so you can just have one color show or both depending on how you feel and what your outfit looks like. 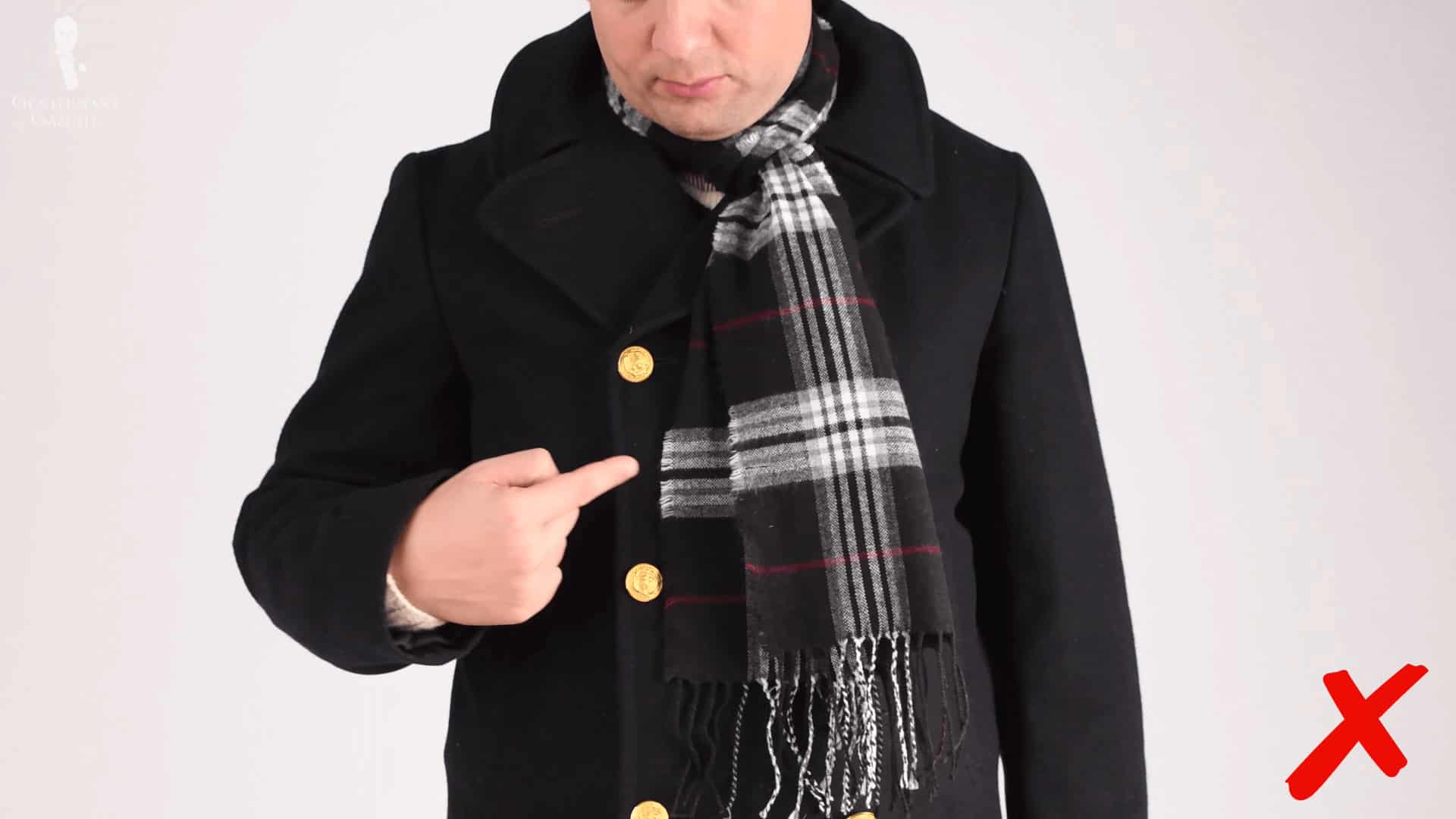 A boring scarf from Target

The $20 scarf is made from 100% acrylic which is also known as nylon so its an artificial fiber that is extremely inexpensive. Its very soft but its also very prone to pilling so its not an investment, its not a piece that you can wear 5 years to come because it will look pilled and old and ugly after probably a season or two. Thats especially true from men with a beard stubble so its just something that wont stand the test of time. 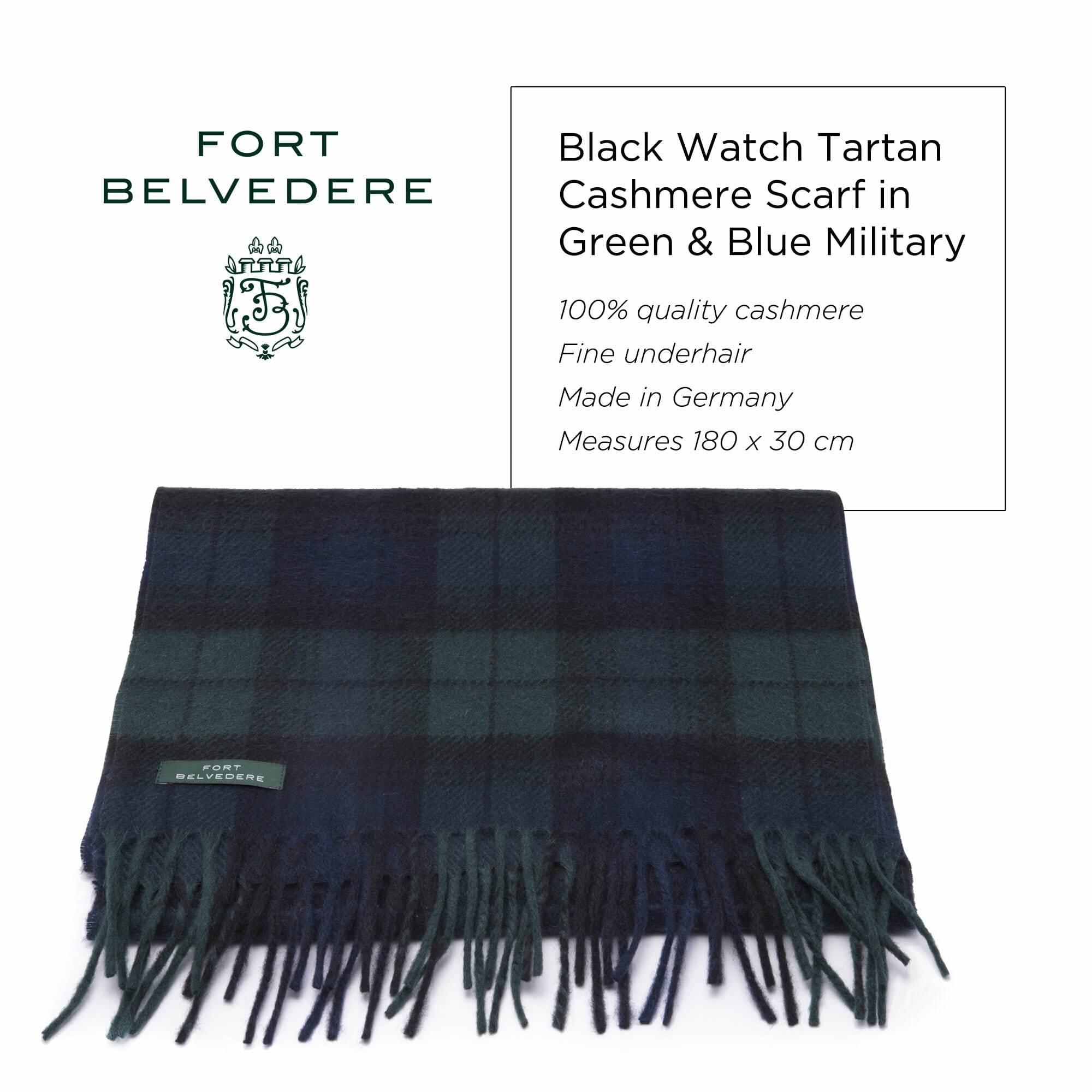 On the other hand, more expensive scarves are made from different materials, preferably natural materials. Why? Because theyre soft, theyll keep you warm, and if the yarns are a long staple length and twist into a nice yarn, and then woven, it is just something that will be around for years to come. If you upgrade a little bit and lets say you go with a $95 scarf, you will likely encounter all wool scarves which keep you warm or you could go with something like an alpaca scarf which is lanolin-free which is good if youre allergic against it and it also keeps you warmer than wool.

One of the classic premium scarf materials is cashmere. Its derived from a goat, it is extremely soft yet at the same time, its warm. Because theres a relatively low amount of friction, unlike with a pair of cashmere socks or a cashmere sweater, where you may see some pilling, with a cashmere scarf, usually, a quality product should last for decades. Not all cashmere or wool is alike and just because something is 100% wool doesnt mean its the same quality as another scarf that comes in 100% wool. 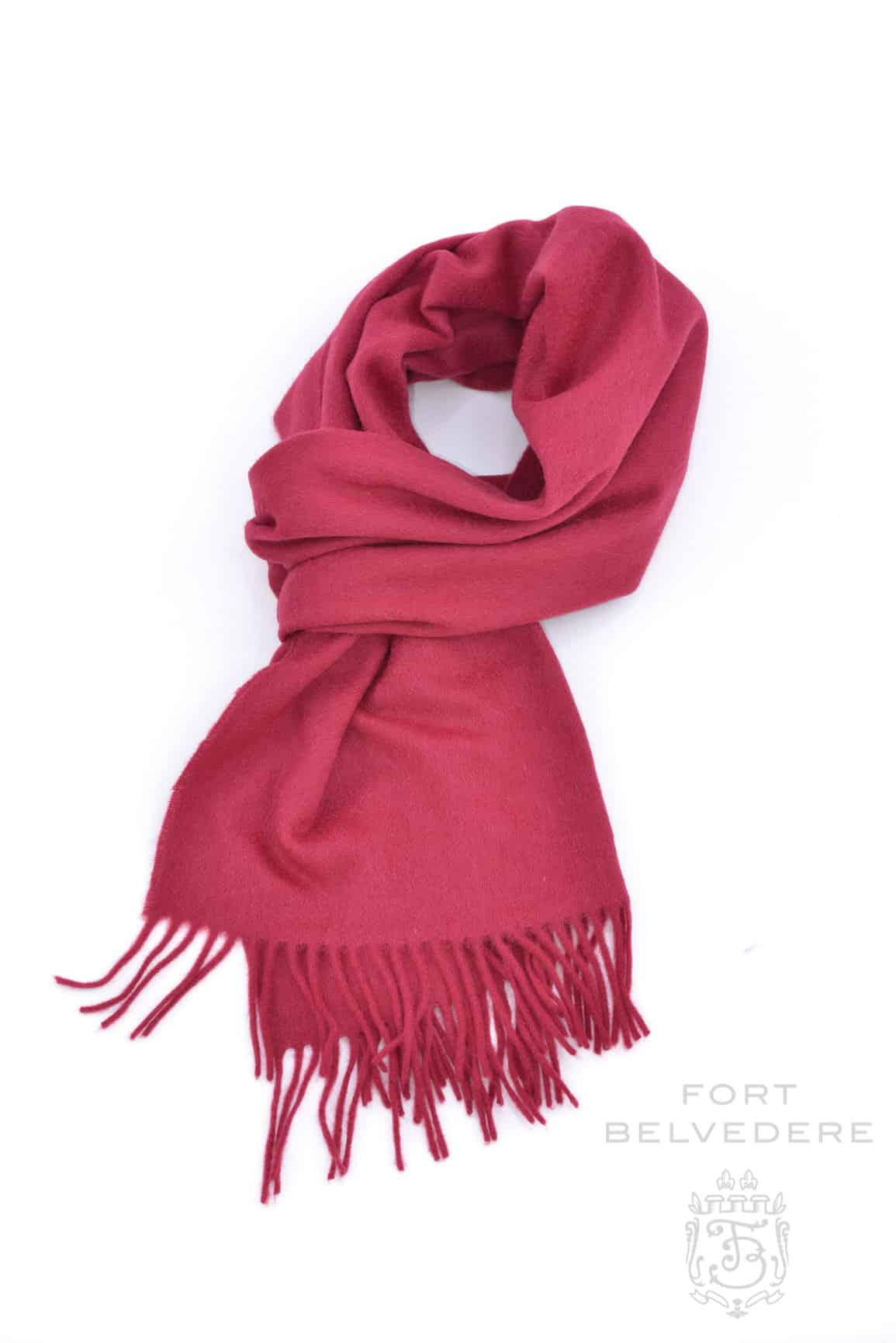 While most people just look at the material composition, the weave of a scarf is also very important. It has a huge impact on the density of the fabric and how heavy it is. A $20 scarf is typically more lightweight because they want to use less material even though it may have a much larger surface. Compare it to the nylon scarf from Target, it is much bigger but lighter than the other scarves from Fort Belvedere which are slimmer. In a nutshell, the more expensive scarf, the $95 scarf or a $200 scarf will be warmer and more comfortable on your skin and that will last longer.

One thing thats rarely discussed is the climate you live in. With a $20 scarf, they usually come in one size fits it all, designed for women, maybe unisex, never for men, and they dont come in different weights. Theres just one kind that supposedly works for everyone. Now if you live in Canada where it gets really cold, of course, you need a scarf that keeps you very warm. On the other hand, if you live in the Caribbean or lets say, in Arizona, where you have just very mild winters and you just want a little something, a cashmere scarf would be overkill and will just make you sweat all the time.

Expensive scarf manufacturers such as Fort Belvedere offer different weight classes so you can get exactly the scarf that works in your climate. So the $20 scarf from Target, is a middle-of-the-road scarf. It is not made for very mild climates but also not made very cold climates. This silk wool blend scarf from Fort Belvedere is a little thinner and its made for milder winters. The wool with a silk blend still insulates enough but its not something that will make you overheat. It is rather elegant and stylish for a really cold winter. Id rather stick with cashmere scarves, they have the same pattern on both sides but they have a really nice color, very soft, and keep me very warm.

If warmth is the thing I care about the most, then I go with this $95 alpaca scarf simply because the alpaca hair is hollow and has air inside of it meaning it insulates better than other natural fibers. Also, because the scarf is double-sided, its rather heavy and substantial. The weave is very tight so no air blows through it and its still very soft because its royal baby alpaca. So overall, no matter where you live, there is a scarf for you that works for your climate. 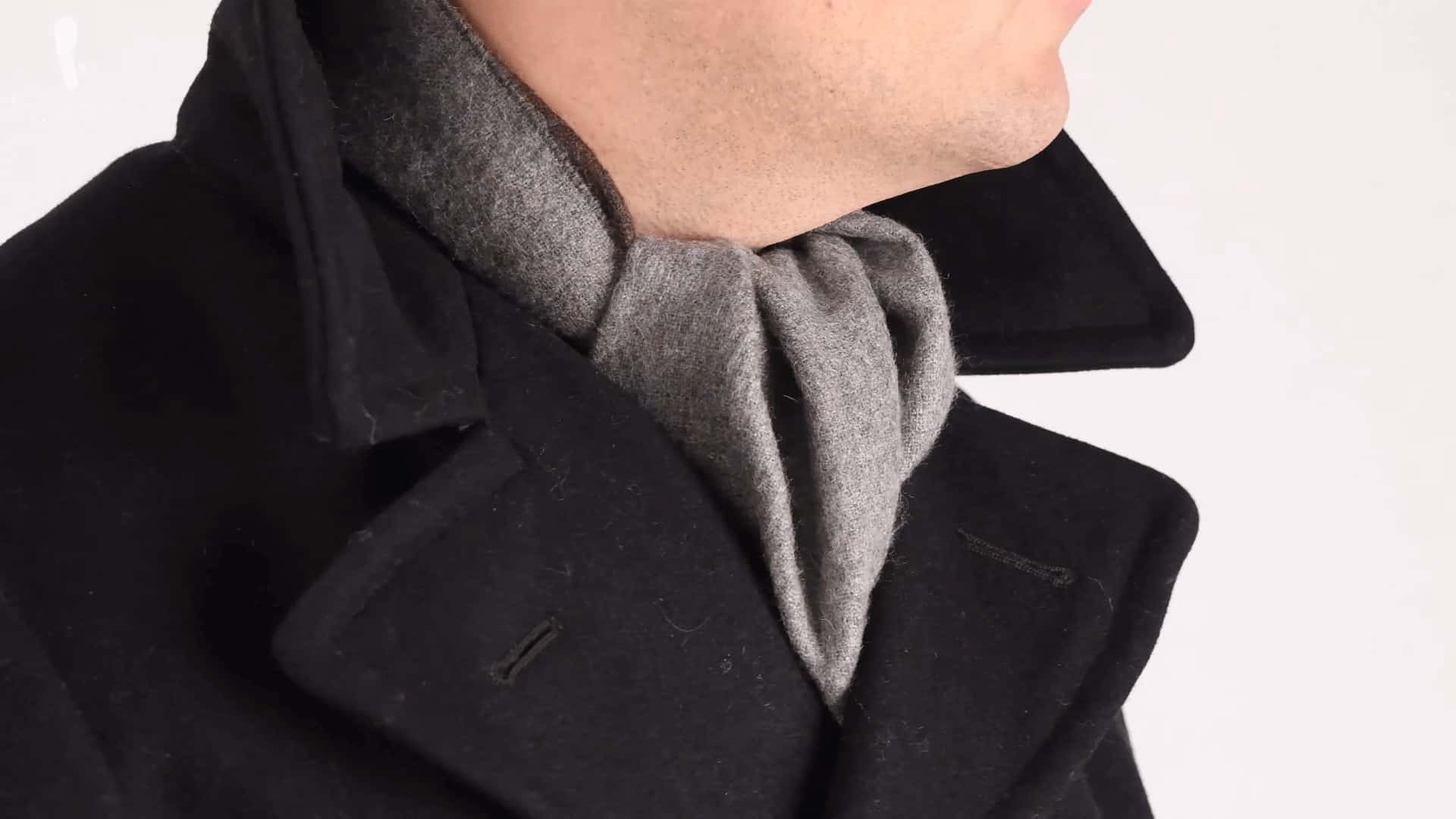 Last but not least, an underrated aspect in regards to scarves is the dimension. For men, we found that most scarves that are about 30 centimeters or 12 inches wide and about 72 inches or 180 centimeters long are really great for men because they allow you to wear scarves in many different ways. You can have the sling, you can just have it around your neck, or you can fold it in different ways. On the other hand, womens scarves are often quite wide and meant to be double up and worn in a different way. So for men, they usually dont work quite as well. 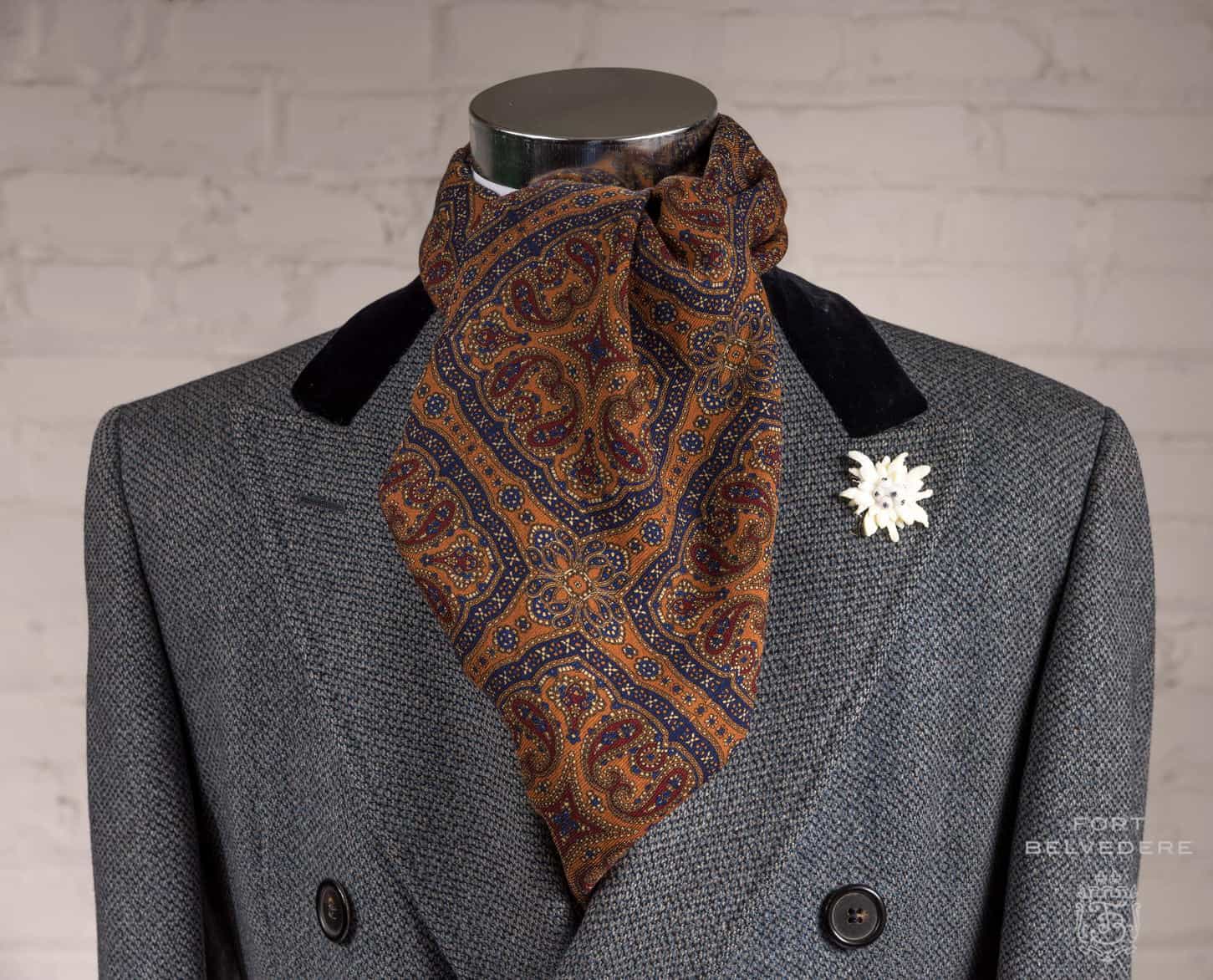 The $20 scarf from Target is rather wide, thin with a loose open weave. The other ones from Fort Belvedere are more tightly woven, more high-quality materials, and I have exactly the right dimensions for elegant gentlemen. Sometimes, I see men who prefer an even longer scarf. Personally, I dont like it as much because then it dangles inside of my coat or on the outside but of course, at the end of the day, it all depends on your personal preference.

So why is it that the $20 scarves come in different dimensions than more expensive scarves, you might wonder? Well, basically, the cheaper scarf is designed in a way so you can get the most yield out of the woven fabric so you can sell the most pieces. On the other hand, a more expensive scarf is designed with the wearer in mind. We want something that makes you look good and comfortable and warm when you wear it. So that approach just shows in the way everything is done from the dimensions to the feel, the longevity, and the way it combines with the rest of your wardrobe. 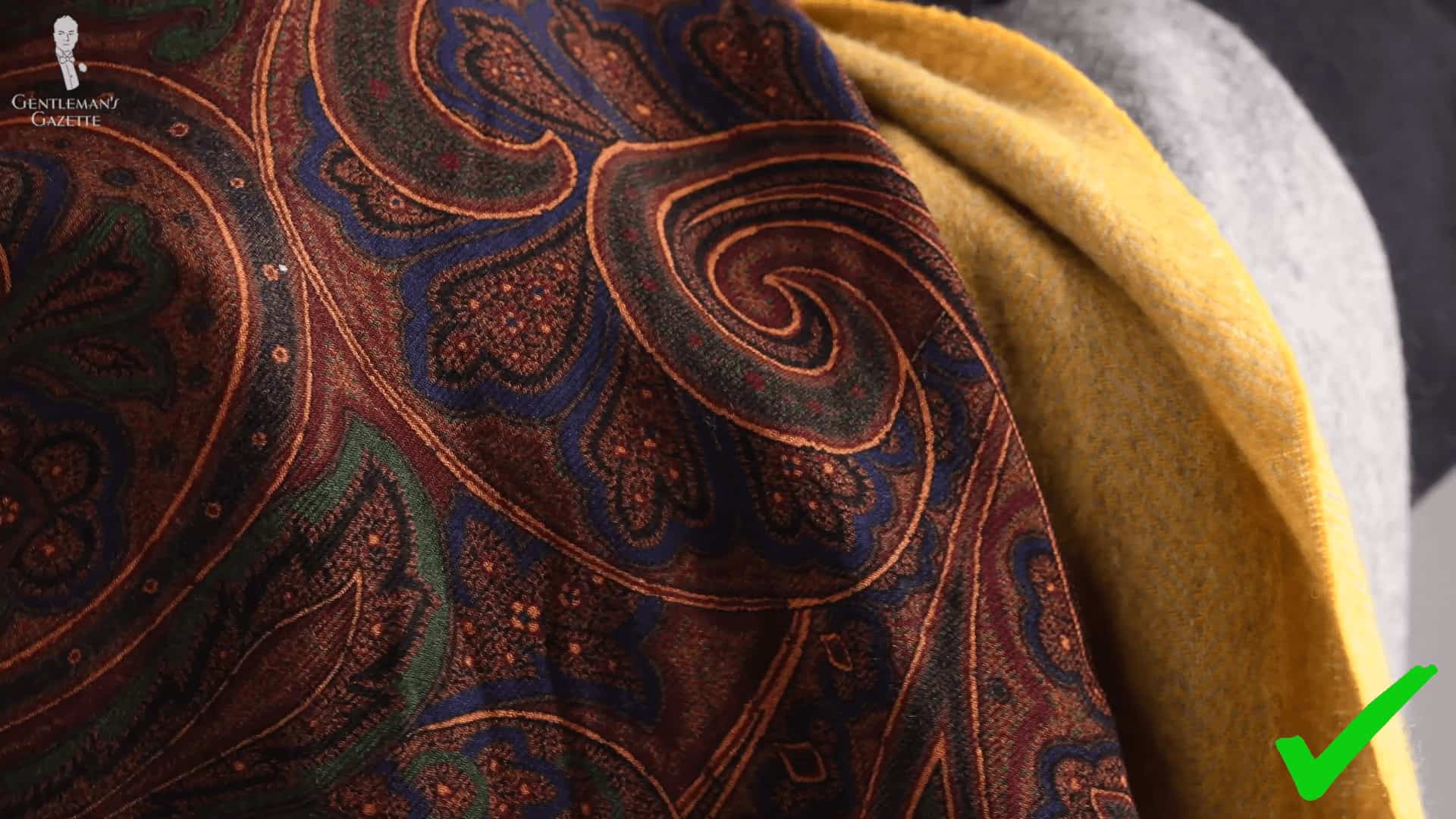 At the end of the day, if all you have is $20, I suggest you go with a solid color and go with something that contrasts with your pea coats, with your overcoats. If youre ready to step up your scarf game, I suggest you get at least three or four different ones in different weight classes because sometimes, you may want something in a transitional season which is in spring or in the fall. Sometimes, you want something for a really cold winter and you also want different colors and patterns and scales so you can change the entire look of your outfit just by changing a few accessories such as your gloves and your scarf.

Even if you think you will not get the value out of a $200 scarf because its ten times as expensive as a $20 scarf, I urge you to think about it this way. If the inexpensive scarf just lasts you one or two seasons versus the expensive scarf lasting you 20 years, the cost per wear is actually the same or it may be even less expensive per wear to have the more expensive scarf. At the same time, it feels more comfortable, it keeps you warmer, it is designed for you and your situation and overall, youll just always look better and more presentable and people may recognize you for it.