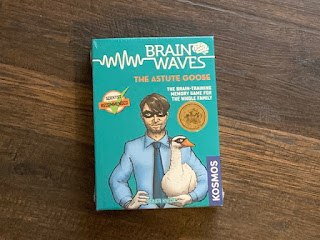 Ready to hear about another game?!?  I have a fun game to share with you today from Timberdoodle, Brainwaves: The Astute Goose.  This game originated in Germany and is manufactured by Thames & Kosmos and is geared for children ages 8 and older.  It's also unique in that it is a 1-5 player game so it can be a single or multiplayer game - I love this flexibility.  It can also be played in as little as 15 minutes ⏲. 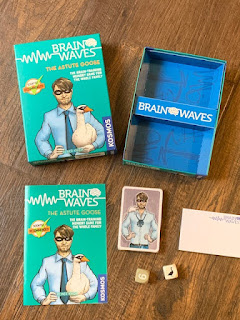 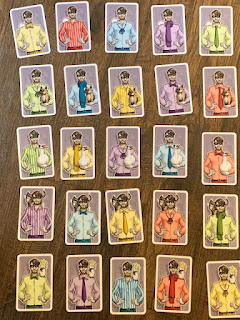 Here are all the suspect cards. 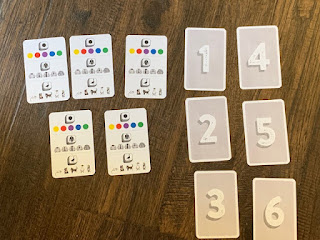 What's the object of the game?  In The Astute Goose, players must identify a burglar that is hiding in a crowd.  They will need to determine the color and style of his clothes along with what animal he is pictured with.  Cards are claimed as players accurately remember the burglar.  Whoever identifies the most burglars wins, that's it!

How do you play?  All players receive a feature card that they place in front of them.  The number cards are then placed on the table according to the difficulty desired. 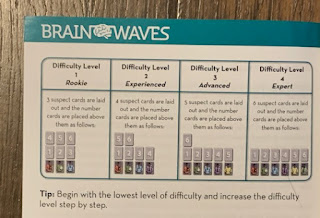 Above you can see the 4 Levels of Difficulty: Rookie, Experienced, Advanced and Expert.

Shuffle the suspect cards and place them in a face down deck in front of the players.  Draw the needed amount of suspect cards (according to the difficulty) and place them face up in a row below the number cards.  Players are given ~ 2 minutes to study and memorize the features of the suspects in the lineup as well as they can.  After the 2 minutes, the suspect cards are flipped over so they are no longer visible.  Game play always begins with the youngest player and moves around clockwise.  The first player will roll both dice.  The number on the die refers to the suspect card in that number position while the feature rolled on the feature die specifies which feature must be identified.  The player needs to state their guess aloud and then secretly look at the card to see if they were correct.  If they were right, they show the card to the other players and place it face down in front of them and keep it.  If they are wrong the other players have a chance to give an answer (starting with the player on the left of the one whose turn it is).  If no one gets the correct answer, the card is removed from the game.  A new card is then placed in the lineup face up.  Players must study it for a minute and then it is flipped over.  Play continues on until there are no more suspect cards in the draw deck and someone rolls a die with an empty position.  This might sound complicated but it's really not.  It's an upgraded version of Memory that is constantly changing so it gets progressively harder as play continues. 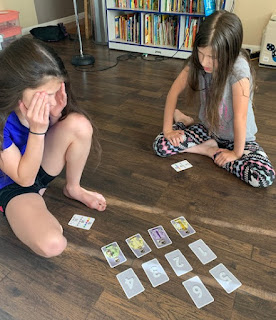 D and E playing.  D is concentrating on remembering all the information. 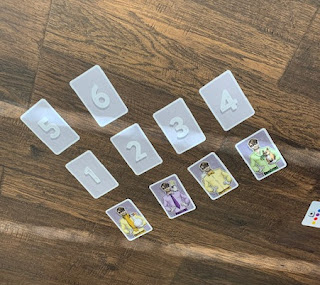 They are playing Difficulty Level 2 (Experienced)

Notice that they have 4 suspects at a time, not 6 (this decreases the level of difficulty).  If they roll a 1 or a 5, they will be answering the question for the card underneath. 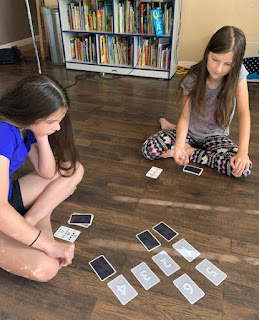 E ended up winning this game. 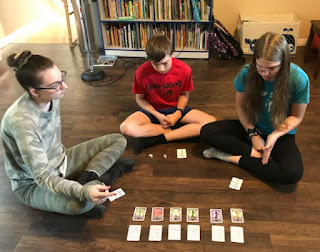 A, B and C studying the suspects.  They are playing the highest difficulty, Level 4 (Expert) having to remember six suspects at a time. 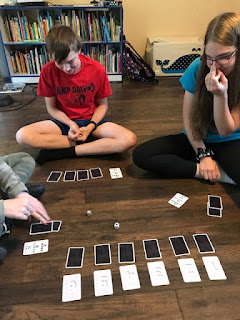 B trying to remember... 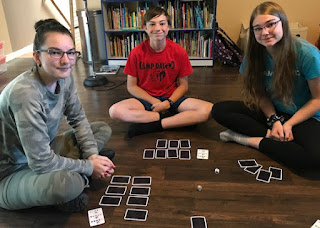 A and C tied in this game as they both had 7 cards.

I think the science behind this game is super interesting.  Neuroscientists in Germany used The Astute Goose as a scientific study to see which brain functions are used when playing.  They found that fluid intelligence, working memory and long-term memory were exercised in this game.  The Astute Goose definitely requires concentration and attention to detail.  I really like that it takes only a minute to learn and the difficulty can be adjusted.  What a great find to have in our game arsenal!

Brainwaves: The Astute Goose is currently included in Timberdoodle's 4th grade curriculum kit and is such a fun brain-training memory game.  This would definitely make a unique gift as well (and it works for teenagers).

Disclosure:  Huge shout out to Timberdoodle for selecting me as a Timberdoodle Blogger.  I received Brainwaves: The Astute Goose in exchange for my honest review.  All opinions are my own.
Back to News
Use left/right arrows to navigate the slideshow or swipe left/right if using a mobile device