by admin July 16, 2022
Hello, crafting friends!
There are lots of Christmas in July challenges going on this month and, as the temperatures soar here in the heart of England, I thought it would be a great opportunity to make a snowman to cool down! 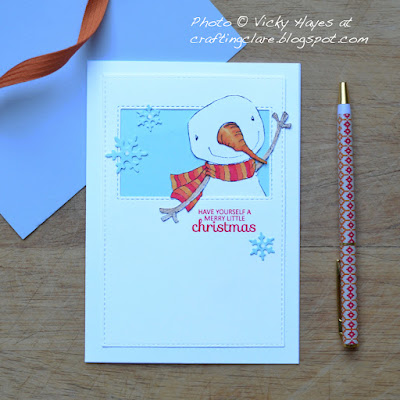 This card features Berry, my favourite snowman from Purple Onion, and was made from snippets except for the card base! I stamped Berry in black ink on an offcut of white card and cut him out, trimming off his bottom half. The carrot nose was stamped again and cut out to make it easier to fussy cut him. His nose, scarf and arms were coloured with alcohol markers. 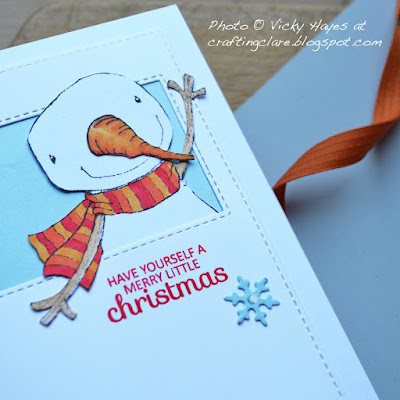 I glued Berry to the back of a panel with a die cut aperture, allowing his head, twiggy arms and scarf to burst out of frame. He was backed with a cut-to-size scrap of blue card. The sentiment is from Clearly Besotted's Red Robin. 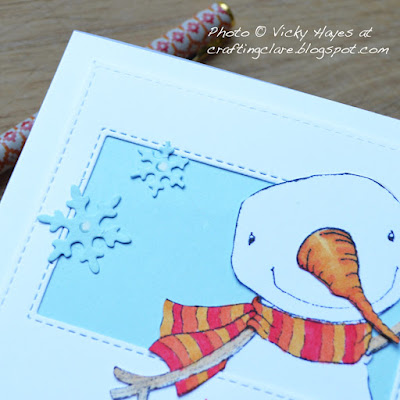 The aperture had been die cut a bit too exuberantly and the stitching on the left of the frame had become just a slit. I hid this with snowflakes die cut from the rest of the blue card and balanced them with another snowflake under the sentiment (which you can see on the previous photo.)

Here are the snippets I used: a blue die cut snowflake panel which had gone pear-shaped (used for the blue backing and the snowflakes), and the aperture panel which had damaged stitching. I'm happy to have saved them from the bin! I also used an extra white snippet for stamping Berry and Berry's nose!
CHALLENGES
This is my snippetty homework for The Snippets Playground where there is a Christmas in July challenge; Jo at the Kickstart Christmas challenge wants to see cards featyuring Snowfolk so I'm joining in there too; Happy Little Stampers CAS challenge has chosen a Christmas in July theme, as has Allsorts so I'm also linking up there. 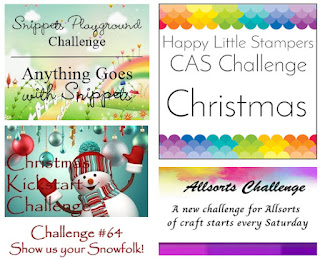 AND IN OTHER NEWS
I'm still resting my fluffy girl's leg and we still have Myurphy staying with us. He has been a total star, seeming to understand that Eva is not quite right, and apart from one incident where Eva forgot herself and tried to chase Murphy down the hallway, they have both been very calm. I came up with a fun game where I stand in the middle of a paddling pool with a floating squeaky ball and try to keep it away from them with my feet. They stand there and use their noses to try to get it, and this appears to be very enjoyable for them! 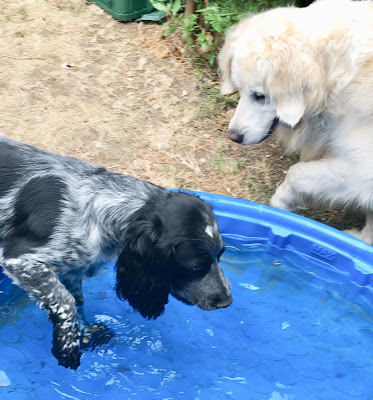 Neither dog is keen to get IN the paddling pool as they don't trust the bottom of it (!) but sometimes the squeaky ball is irresistible and one of them cautiously steps in. Look at Murph pretending to be a hunter :) He's a lap dog really although he does love a hedge!!