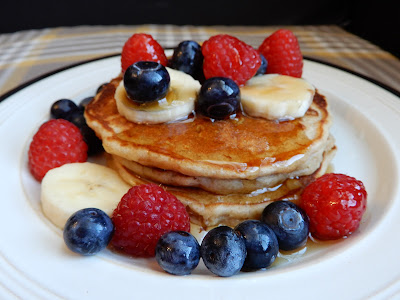 It's always a good day to flip for pancakes. But if you need an excuse to celebrate pancakes, International Pancake Day is today - Tuesday, February 25.

Pancake Day is a moveable feast whose date is determined by Easter. It's celebrated exactly 47 days before Easter Sunday (April 12 this year).

It seems there's a day for every food these days. There are days delighting in doughnuts. There are days for sandwiches, hamburgers and hot dogs. Pie gets more than one day. But Pancake Day is especially important in Liberal, Kansas, and Olney, England. For the past 71 years, the women of the two communities have raced down the streets of their respective communities, flipping pancakes and running against the clock and each other. The race is always on Shrove Tuesday, the day before Ash Wednesday. It's the only race of its kind in the world.

"Shrove" is not a thing, but a verb. "Shrive" (shrove, shriven) comes from the Old English verb scrfan, "to decree, decree after judgment, impose a penance upon, hear the confession of," according to the dictionary. Shrove Tuesday is a day to reflect, to seek penance and get ready for Lent.

In Olney, the Pancake Race tradition dates back to 1445. Legend has it that a woman was busy making pancakes and using up cooking fats, which were forbidden during Lent at that time. Hearing the church bells ring to announce the Shrove Tuesday service, she grabbed her head scarf and ran to the church, with pancake-filled skillet in hand. In following years, neighbors joined the race to the church. The first to arrive collected a Kiss of Peace from the bell ringer.

The international race with Liberal began in 1950, when Liberal Jaycee President R.J. Leete saw a photo of the English race in Time magazine and then contacted Olney, challenging their women to race against the women of Liberal.

Racers must still wear a head scarf and apron. Each runner flips her pancake at the starting signal and again as she crosses the finish line to prove she still has her pancake after running the 415-yard course.
According to the book, America Celebrates! A Patchwork of Weird & Wonderful Holiday Lore, some superstitions have evolved among Liberal racers:
I flip for pancakes anytime, not just on International Pancake Day. So I decided to try out a new recipe when Kinley and Brooke were here last week. I love to eat out for breakfast, but we don't get to do it all that often. (Let me re-phrase that: I don't eat out that much for breakfast. Randy meets his buddies at Joan's Cafe at least once a week.) 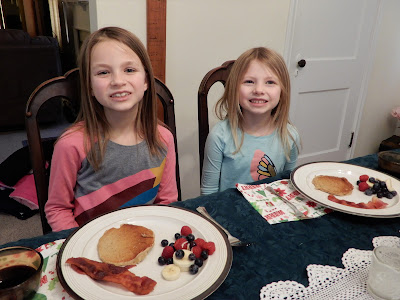 I'm an advocate of breakfast-for-supper and so are the girls, so if you want to celebrate Shrove Tuesday in a way that's been a tradition since 1455, here's the recipe. And you don't even have to wear a head scarf or run a race to enjoy them! 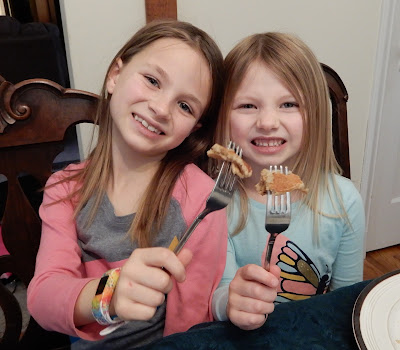 Whether you make pancakes or not, I'll leave you with the traditional blessing bestowed upon the winner - whether it be in Liberal or Olney:

The Peace of the Lord be always with you. 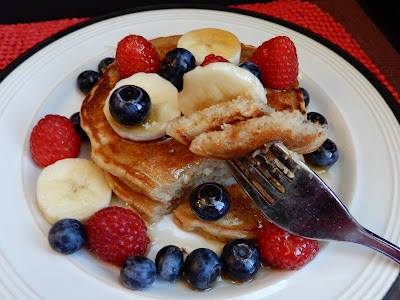 In a medium bowl, combine oats, bananas and milk. Set aside to let the oats soak and soften.

In a large bowl, whisk together the flours, brown sugar, baking powder, baking soda and salt. Beat the egg and oil into the wet oatmeal mixture, then pour the wet mixture into the dry mixture. Add nuts, if desired, and stir until just combined.

Butter the preheated surface of the griddle or skillet. Use about 1/4 cup batter per pancake. Wait until the entire exposed surface of the pancake is bubbly and the edges start to look as though they are set, then flip the pancake. Cook the second side and remove pancakes to a plate or a chafing dish to keep warm.

Garnish the pancakes with more chopped pecans and/or fruit and serve with your favorite syrup.
Back to News
Use left/right arrows to navigate the slideshow or swipe left/right if using a mobile device