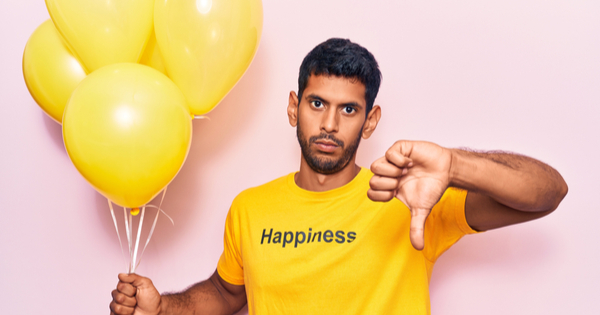 When I was working as a cook in a restaurant in we used to go in around noon to start prep, then take a break when the wait staff arrived before service. I was standing with my buddy Chris when Kiki, a happy go lucky waitress still in college, burst through the door and skipped into the kitchen towards the timeclock. She waved at us and in a sing song voice said hello. She was smiling. Chris slowly turned his head and calmly said “I’ve never been that happy in my life.”

We laughed but it was only funny because it’s true and I still feel exactly the same way. I have never understood happy people and when I come across one, I assume there’s something wrong with them. They must be demented, sick, or have some sort of brain damage that makes them unable to completely understand how awful everything is. I can only assume they must have the IQ of a pigeon, blindly flying through life, looking for a stoop to crap on or some crumbs to scarf.

I find I just can’t trust them at all and find myself not believing a word they say. If they’re smiling and laughing at something I can’t help but think “What drugs are they taking and do they look like the type to share?” It only makes me believe that there absolutely has to be something wrong or off or chemically altered. Who the hell is naturally happy anymore? And maybe more importantly, has anyone been happy ever?

I can’t remember the last time I was happy. I’m nervous, worried, sleepless and depressed a lot. I’m always tired. I always feel crappy. There are never enough hours in a day. TV is terrible. New movies suck. Have you heard anything on the radio lately that didn’t sound like hungry bears stepping on kittens? Not to say that there aren’t moments of happiness. There are plenty. Usually followed by hours, days, or sometimes weeks of feeling agitated, annoyed, restless, and generally upset.

I felt like this was completely abnormal but after discussing these feelings at length with my close friends I found out it isn’t. Every one of us is searching for some sort of meaning, some sort of sign, some sort of…thing that we can’t put our finger on. There is something missing from adulthood but no one knows what that thing is.

The same friend, Chris, at the restaurant said something else that stuck with me too. I used to always say “It’s always something” when something would go wrong at the restaurant. One time he looked at me and said “Well I’ll tell you this, it’s never nothing” and it’s funny because it’s true. I’m always waiting for the rug to get pulled out from under me. Then it does. Then the rug comes back. Then it gets pulled out from under me again. Before I know it, it’s back again.

There aren’t many weeks where time just rolls on indifferent. There’s a sort of crisis and turning point constantly looming. We don’t feel at the helm. Someone else has the wheel and is steering and whatever train we’re on is off the tracks and moving fast. Too fast.

I’d like to make some generalization about generations and how the millennials or the boomers or Gen Z is doing something to make this happen. But that’s click bait. It’s not generational.

Look around. Do people over 50 seem happier than everyone else? It doesn’t look that way to me. And I doubt you can find a large group of Gen Z that thinks life is going to “alright” as they get older. If anything, they probably have the most to worry about out of anyone.

Could be the world or maybe it’s just here in America. But no one is happy. It’s all fighting and misery.

From vaccines to voting to global warming to equal rights to just getting along with our neighbor; no one can do it. It’s just more fighting and misery. You can be happy if you want to, but you’re only ignoring the fire at your feet. Put it out or it burns. Then assess the damage. Then try to be happy until the fire comes back. And it will come back.

Happy people make me sick. I can’t understand them. Maybe I just catch them all on the days that the fire is out, the damage assessed and everything seems like it will be ok. Maybe Chris and I caught Kiki on a day where she was just feeling so positive about the final outcome. That the days of darkness or sadness had long passed.

Or maybe George Bernard Shaw was right and youth is wasted on the young. Or maybe those people just can’t be trusted because they refuse to see that life isn’t something to be happy about. Not anymore.