It got hot today--93 degrees and the humidity is supposed to rise over the weekend to compete with the heat.  I'll be staying in for the next few days.  With the air conditioner cranked.

The yellow iris bloomed.  It's on the side of the house so I forget about it but remembered to look at it this morning.  Isn't it pretty?  Irises make me think of orchids sometimes.

One of the poppy buds in the garden patch is about ready to pop.  There are a lot of buds on the two plants so maybe next week I'll have a swath of poppies swaying in the breeze.

The poppies on the side of the house are just about done but I couldn't resist one more picture.  I like the waxy shine on the petals. 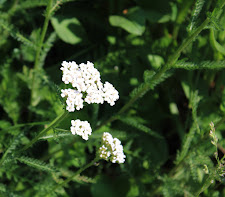 The yarrow is blooming too.  I usually think the foliage is weeds but then the little flowers open up and I remember that it's an herb.  I think.  Whatever it is, it's really old.  I looked up the uses of the herb and here's what it said--Yarrow is used for fever, common cold, hay fever, absence of menstruation, dysentery, diarrhea, loss of appetite, gastrointestinal (GI) tract discomfort, and to induce sweating. Some people chew the fresh leaves to relieve toothache.  Very versatile.

I started a hat this afternoon and knitted the ribbing and started the body of the hat at Friday Night Knitting.  I've been knitting toe caps one after the other and thought I'd tackle something a little bigger next.  This hat is for my pile to go to the Seaman's Church Institute Christmas at Sea program.  They make packages with toiletries and a warm hat or scarf for merchant seamen who are on shipboard over the holidays.  Since international ships come to Green Bay it's a charity that means something to me.

Today's toss was a couple pairs of capris.  They're too big and baggy and I'm not keeping them.

The prompt today said to write about the oddest love triangle you can think of.  I thought of one and, trust me, it's odd, so odd that I'm not sharing but it made me giggle and shudder at the same time.

Oh, I didn't tell you last night but we had a thunderstorm in the early evening and lightning struck about a block from here, so near that I could see the transformer blow through the trees.  I was watching something that I'd DVR'd and it fried the DVR/cable box.  The power was out for a couple hours and everything but the DVR/cable box came back to life.  I even called the cable company and had the tech send a "wake up" message to it but nothing happened so I had to go and swap it out this afternoon.  They recommend an appointment which seemed silly but I was glad I made one because I got called first of the half dozen or so people in the store and was out of there in less than ten minutes.  Naturally getting the new box set up wasn't as easy as the guy said it'd be but a nice young woman helped me and now I'm back in business.  Whew.  The worst part was that I lost all the DVRs that I kept of DS and DIL1 being interviewed about the brewery, etc. but there was no way to take the memory out of one box and put it into the new one.  Dang it.