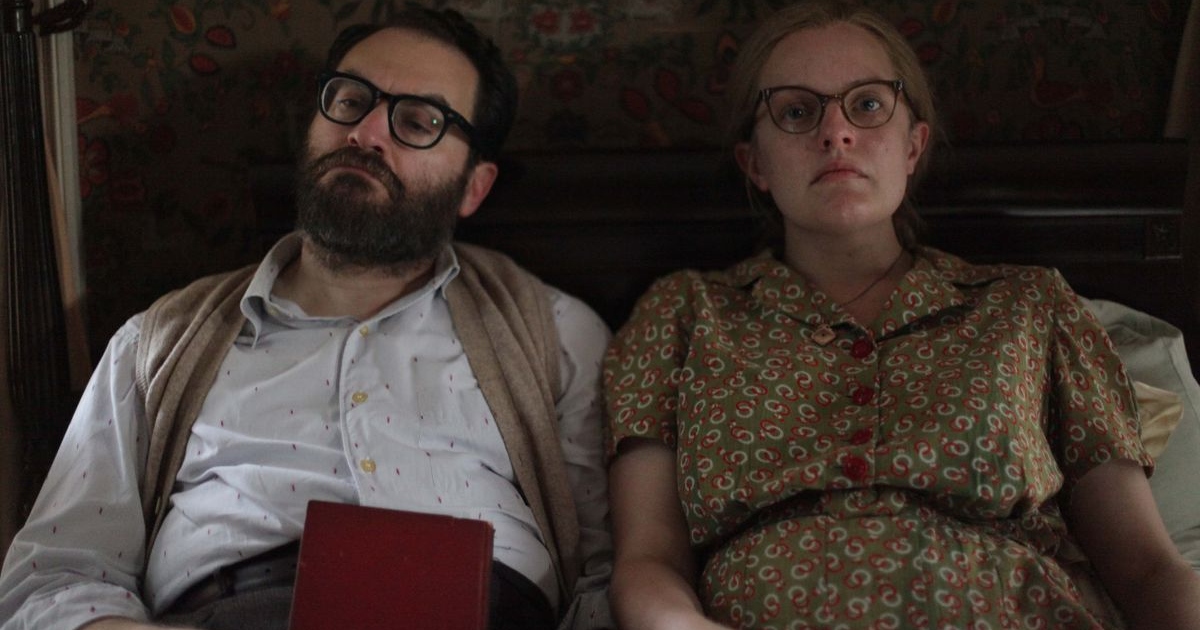 What makes a great biographical feature film? Is it the film that focuses squarely on the complete life story of its subject? Is it the one that focuses on one moment in the artist’s life as some sort of study of the central figure’s psyche? Or is it the one that sees them as little more than a cipher, setting fictional characters in their presence in order to get to deeper truths about the figure and their work or broader impact?

For Josephine Decker, whose Shirley hits virtual theaters June 5, it’s some strange melange of them all. Introducing viewers to legendary writer Shirley Jackson as she is on the precipice of publishing one of her greatest works, Shirley doesn’t begin with the iconic scribe. Instead, the picture opens on a young woman named Rose (played brilliantly by Odessa Young), as she takes in Jackson’s legendary New Yorker story The Lottery. Married to a young man named Fred (played by a never better Logan Lerman, somehow remaining the most undervalued leading man of his generation), she embraces Jackson’s legendary horror story in a far more erotic manner than expected, ultimately finishing the piece and lustily having sex with him in the passenger train’s bathroom.

See, the pair are not some random readers of Jackson’s work. Fred has been tapped to assist Jackson’s husband, Stanley Edgar Hyman (Michael Stuhlbarg), as a sort of glorified TA. The two young lovebirds are expecting so this is a joyous and new journey for the pair of them. Only billed as a biopic by those who haven’t seen the film, Shirley feels more like some alluring bit of historical fiction (much like the novel from which it is based written by Susan Scarf Merrell), with the writer (played by Elisabeth Moss in just another of her brilliant dramatic turns since the conclusion of Mad Men) at first only glimpsed in between disembodied arms and shoulders while the new young couple joins a stuffy dinner party held by Jackson and her partner.

Shirley, the character, is hard at work on what would be Hangsaman, and whereas her husband’s creepy advances and pompous intellectual proclamations feel of a piece with this type of erotic thriller, the real connection is found between the two women. Rose is almost immediately caught up in Shirley’s web, with her becoming one of the artist’s closest confidants and ostensibly her partner in crime. With its source novel’s close connections to Edward Albee’s influential Who’s Afraid of Virginia Woolf, the film feels very much in that type of heightened register, not just with performances that are verbose and arch, but Decker’s direction is often surreal and blurs the line both between fact and fiction as well as reality and imagination.

The relationship between the two men is far heavier on backstabbing and “bitchiness.” The two exchange pleasantries until the other leaves the room, leading to many doublecrosses not just in the form of a sexual pass made towards Rose by Stanley. Blowing up over dinner one evening, Stanley muses angrily that Fred’s dissertation isn’t “awful, that would have been exciting.” Instead the lecherous intellectual think’s it’s “terrifically competent” and that “there’s no excuse for that.” This is the type of heady, thought provoking conversation that’s stuffed into an incredibly tight and tightly wound knot, an erotic neo-thriler that waxes philosophical about Shirley Jackson less through the use of her own life and more so the spirit and moodiness of her work.

But what about Decker’s experimentation. While it appears as though the novel Hangsaman would be the piece that Shirley is working on, the film takes place ostensibly a full decade after the actual publication of the work, lending incredible power to Moss’ Jackson’s exclamation that Stanley shouldn’t tell her “I don’t know this girl.” Haunting dream-like sequences see both Rose and Shirley identifying with a missing Bennington student, a spirit that their sharing only draws them only closer. Both Moss and Young are incredible in scenes they share, with Decker’s camera portraying these interchanges with an intimacy and near-tenderness that seems otherwise non-existent. Decker and DP Sturla Brandth Grovlen turn this fictional recounting of a moment in the life of Shirley Jackson into and expressionist rumination on truth, storytelling and the artist-muse relationship, and even more so a deeply moving deconstruction of the relationship between creativity and mental illness, something that is clearly very near and dear to Decker as an artist (just see her last film, the brilliant Madeline’s Madeline).

So to answer the question that opened this piece, maybe they all can be the foundation of great biopics. But what makes Shirley a film that will be remembered for years to come is not the simple recounting of facts. No, instead it’s director Josephine Decker’s ability to draw from the central figure’s work, use their energy to craft a singular and profoundly moving story regardless of historical validity. One of the great American films of 2020, this film is.