Ten years ago, I said toodle-oo to Auckland city and shacked up with my new fella in the sticks. I packed all my possessions and bid farewell to my favourite bookstores, boutiques, cafes, garden centres and op shops before moving into my husband’s farmhouse at the foot of the Hunua Ranges, the hilly (but not officially mountainous) divide between Auckland, Waikato and the Firth of Thames.

Less than six months later, I moved back to Auckland city, courtesy of a bunch of paper-pushing, rubber-stamping, boundary-shifting bureaucrats in Wellington. When the Auckland “super city” was formed in November 2010, it was decreed that Hunua – along with many other Franklin County fringe-dwelling neighbourhoods – was no longer 55km south-east of Auckland, but 55km south-east in Auckland.

If Queen Street is considered the beating Heart of the City, I guess that makes Hunua an irritating little bunion on one of its pinky toes. The border to the Waikato – and to the relative freedoms of Level 2 – is just 10 minutes down the road from our home, but there’s no crossing it. Our bubble isn’t looking for any trouble. Instead, I’m doing my bit for the greater good by reluctantly reviving my role as a relief teacher while staying home and eating and drinking too much. Comfort or style? While repotting her Astrophytum myriostigma, our model wears fingerless gloves by Native World New Zealand and a bespoke woollen ear-warmer – a cross between a large headband and a topless beanie – knitted by Lynda’s sister Brenda’s friend Bronny.

“Ah,” as Mrs Augusta Elton said to Jane Austen’s Emma, “there is nothing like staying home for real comfort.”

During the last lockdown, I found comfort in champagne breakfasts and freshly baked loaves of sourdough. I also baked my way through pages 212-220 – the puddings chapter – of the 100th-anniversary edition of the Edmonds Cookery Book. You name it, we ate it: ‘Granny Smith’ apple dumplings, bread ‘n’ butter pudding, lemon souffle, fruit sponge, self-saucing chocolate pudding, rice pudding with quince jelly and steamed treacle pudding.

To be fair, last time around I was ill-prepared for achieving anything other than eating, and I certainly wasn’t prepared for the consequences of all that consumption. When I could no longer fit my jeans, I had to borrow a pair of my Mum’s old track pants (I picked them up, contactlessly of course, while dropping off my parents’ groceries).

Back in March, in the hours before the shops all shut for Level 4, I was too anxious to queue for last-minute DIY supplies such as plants, potting mix, wallpaper paste and paint, but this time, it’s all systems go on the gardening front at least. I stocked up on seeds, seed-raising mix and a rugby tackle bag-sized sack of fine grade vermiculite (the fiddly sawdust-like stuff that slow-germinating flower seeds prefer to sprout through) so I can turn our sunny stable block into a propagation nursery. 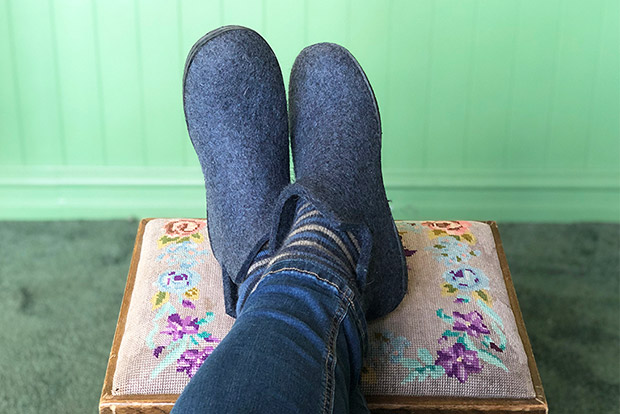 I’m in my comfort zone when sowing seeds in trays indoors but getting out into the garden is not much fun on a frosty winter’s day. I don thermal longjohns under my weatherproof overalls, put on two pairs of socks, a scarf and a hand-knitted ear warmer to keep my lugs as snug as a bug in a rug, but nothing stops my green fingers turning white when they get wet and cold.

Although you can buy thermal-lined gardening gloves, they are too bulky for fiddly jobs like transplanting seedlings or repotting indoor plants, whereas dead possums and merino fleece do the trick. A couple of weeks ago, on a girls’ “shop local” day out, I bought some Native World New Zealand fingerless gloves from The Clevedon Woolshed. Made from 20 per cent possum fur, 70 per cent merino wool and 10 per cent silk, my hands have never felt so soft and snuggly, nor looked so snazzy, in the garden.

I wish I could say the same of my new felted all-terrain Glerups. Soft and snuggly, why yes indeed they are, but snazzy-looking? Ahem, not so much. Indeed, when a reliably stylish school mum showed up at our local coffee cart last week wearing these comfy clodhoppers, it reminded me that Covid-19 isn’t the only evidence of a world suddenly gone mad.

And yet, here I am, barely a week later, eating my own words as well as another round of puddings, because ever since I slipped into my own pair of Glerups, I’ve rarely taken them off. From school runs to the chook run, I’m congratulating myself for choosing a pale denim pair that coordinates as smartly with my skinny jeans as it does with my pyjama pants. 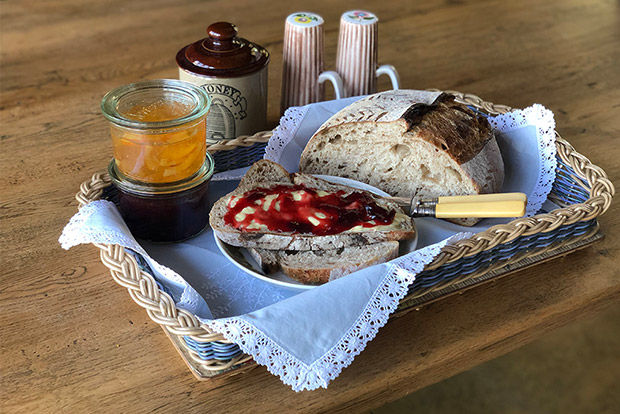 Wearing them makes me feel like a fashion rebel, like I’m flicking the bird at high couture cobblers such as French designer Christian Louboutin. (“People say I am the king of painful shoes,” he once complained in an interview with Vogue magazine. “I try to make high heels as comfortable as they can be, but my priority is design, beauty and sexiness. You’re abandoning a lot of ideas when you’re too into comfort.”)

My husband wishes I would abandon the idea of loafing about in these shoes in public, although that “public” is currently limited to trips to the local dairy for extra ice cream and custard. And although this will come as cold comfort to him, I’d rather feel warm than look flash while we’re stuck at home.