Confession: All but one of the Surf Gang members I spent a day with on the Lower East Side beat me to our scheduled interview. It won’t be the last time they’re more on the ball than I am, either—hours later, Evil Giane, one of Surf Gang’s core producers, has already purchased six tickets for the South Brooklyn ferry before I can figure out the machine. While we kill time waiting for the boat, Moh Baretta (a rapper and the only member who’s late in-person, because he twisted his ankle on the way to the train) rolls a joint mixed with crunchy fanta leaf, which the group passes around until we have to sheepishly relocate—a woman brought her baby on the ferry platform, and nobody wants to smoke weed near the baby.

Whenever Surf Gang enters a new space, it’s obvious that other people expect them to be loud. Eyes flick in their direction, then quickly away: They’re a multiracial band of 20-somethings in “look at me” gear. Giane wears a baseball cap with a big green weed leaf emblazoned on it; Harto Falión keeps wrapping a fuzzy gray scarf around his head babushka-style; and Moh limps around in chunky, white-soled Rick Owens platforms that definitely aren’t helping the ankle situation. Yes, dyed hair and tattoo sleeves abound—but so does decorum. They take up a little too much time at the ferry bar, but also apologize to the next man in line. There’s palpable excitement that lunch at Kiki’s is going on VICE’s tab, but nobody puts in an extravagant order. 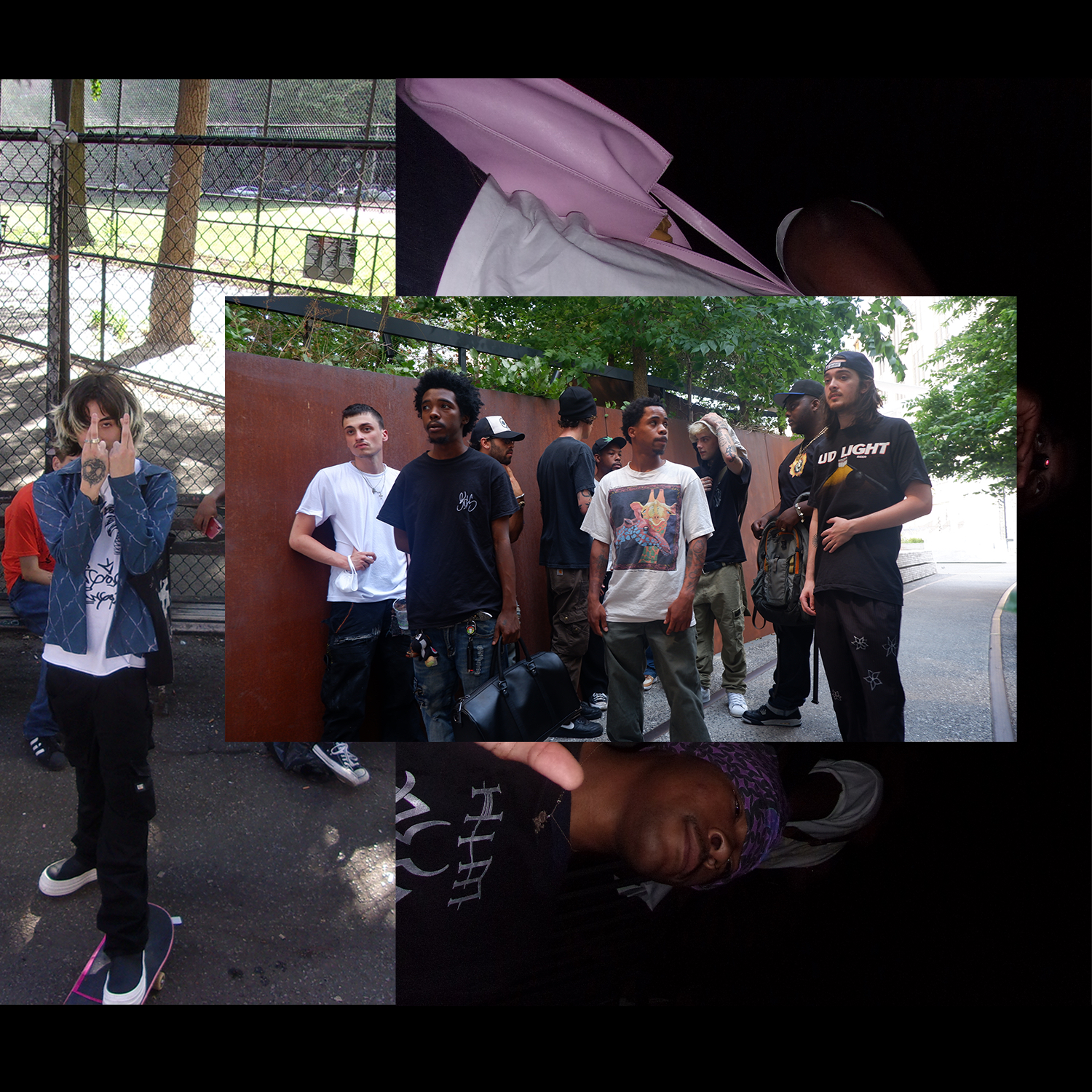 Surf Gang’s music has a sense of ease to it, even though what they do is far from easy. Their brand of rap isn’t so far from the harsher sound of Brooklyn drill, currently the sound of New York, but imagine if someone gave a drill rapper a bouquet of flowers a moment before they started recording. Or if they recorded only when they were sleepy after a long night of eating delicious pizza with friends. The beats, sprinkled with fun little bloops, have touches of emo rap, of wonky Soundcloud rap, of psychedelic rock, and of “Baby Shark.” “We jokingly throw around the term ‘post-music’ or ‘post-rap,’” said Goner, a producer with Surf Gang who runs his own studio. “Contemporary sound design!” Moh chimed in. The music is certainly contemporary, a distinct product of being hungry, diffusely ambitious, stuck inside, messing with Ableton on a secondhand laptop, stripping down different genres and synthesizing their most coherent features—raw emotion plus home-cooked production.

The members of Surf Gang who I get to talk to—there are 12, in all—don’t consider themselves famous, but they know they’re hot (per Rolling Stone, Drake follows Evilgiane on Instagram, soooooo). They all look so objectively cool that at one point I ask each member where their pants are from (custom, Issey Miyake offshoot, brandless, Caterpillar Inc.). They also know they have fans—the kind of fans who recognize them and ask for pictures, or who troll the members with a handful of dedicated meme pages that even Surf Gang can’t quite decipher. At one point, Moh shows me a picture of Giane in a wig with a news chyron pasted on top of it calling him a “secret member” of the group. I don’t really get the joke.

Perched on the bleachers in Corlears Hook Park, sandwiched between FDR Drive and the East River, they dutifully pass my recorder around from member to member so it can pick up their voices over the constant hum of traffic or the whir of an NYPD helicopter hovering a little too close for comfort. Members stress that their collective set-up gives them autonomy: Their connection enhances their ability to collaborate, both within Surf Gang and beyond, at will. They’re more Odd Future than Brockhampton—instead of crowding onto a single track, the collective operates more like a roster of players whose skills and expertise can be tapped in at will. They drop Surf Gang projects on streaming services, but they also release and produce music under their individual monikers and work with artists who don’t quite fall under the Surf Gang umbrella. “When I’m not making music, I’m on the phone with my manager,” Polo Perks, one of the rappers in the group, said on a Zoom call from Atlanta, the day after I hung out with the rest of his crew. “Or I’m traveling and keeping tabs on my other friends who are artists across the country. I really, really, really care about everybody around me, so I check in with everybody around me. If you were an artist, I'd have a reason to fly out, check you, help you out, and build—you cannot be Michael Jordan trying to hang out with Pelé or Messi. I'm tryna ball—I gotta chill with Robertson, I gotta chill with Pippen, I gotta kick it with Miller.” Deep personal relationships, shared sensibilities, and musical touchstones—Linkin Park’s Hybrid Theory, along with acts like Sum 41, Bikini Kill, Kanye West, are shared classics—are the ties that bind. Part of that is purely logistics. “It's hard to get all of us in the same room,” Giane said. “Everyone’s got their whole life going on. But more recently, we've been linking up a lot like at shows and shit like that. It's always fun. Always good vibes.”

The collective dates back to 2018, and most of the relationships that comprise it are three or four years old. While New York is now everyone’s home base, they come from a variety of backgrounds, boroughs, and farther-off hometowns; they’re diverse in an unselfconscious way that feels distinct to a generation raised online. As artists, Surf Gang’s members coalesce into a kind of musical perpetual motion machine, generating their own energy with the high they get from creating together. Members write, produce, master, head to recording sessions at whichever studio or apartment has a sliver of space, design their own merch and promotional materials, create their own album art, and perform together, throwing notoriously raucous, mosh-heavy shows at any venue that can handle them.

“I love interacting. I love seeing kids have fun, too,” Polo Perks said. He said his affection for chaos comes from the time he spent wrecking havoc as a teenager in Connecticut, away from his home in the Bronx. “In my younger days, doing house parties and shit, seeing someone’s $120,000 home with shit just smashed, liquor all over the place, and getting footage of all of that—I’m a nutcase. I like seeing shit turnt. So, when it comes to the shows, I always make sure that I give it my all.” Giane dissented, gently: “Usually we do DIY shit where it's just, like, we're all surrounded. They want to touch us. But we can't really do that anymore,” he said. “Our fans have gotten a little too hectic nowadays.” 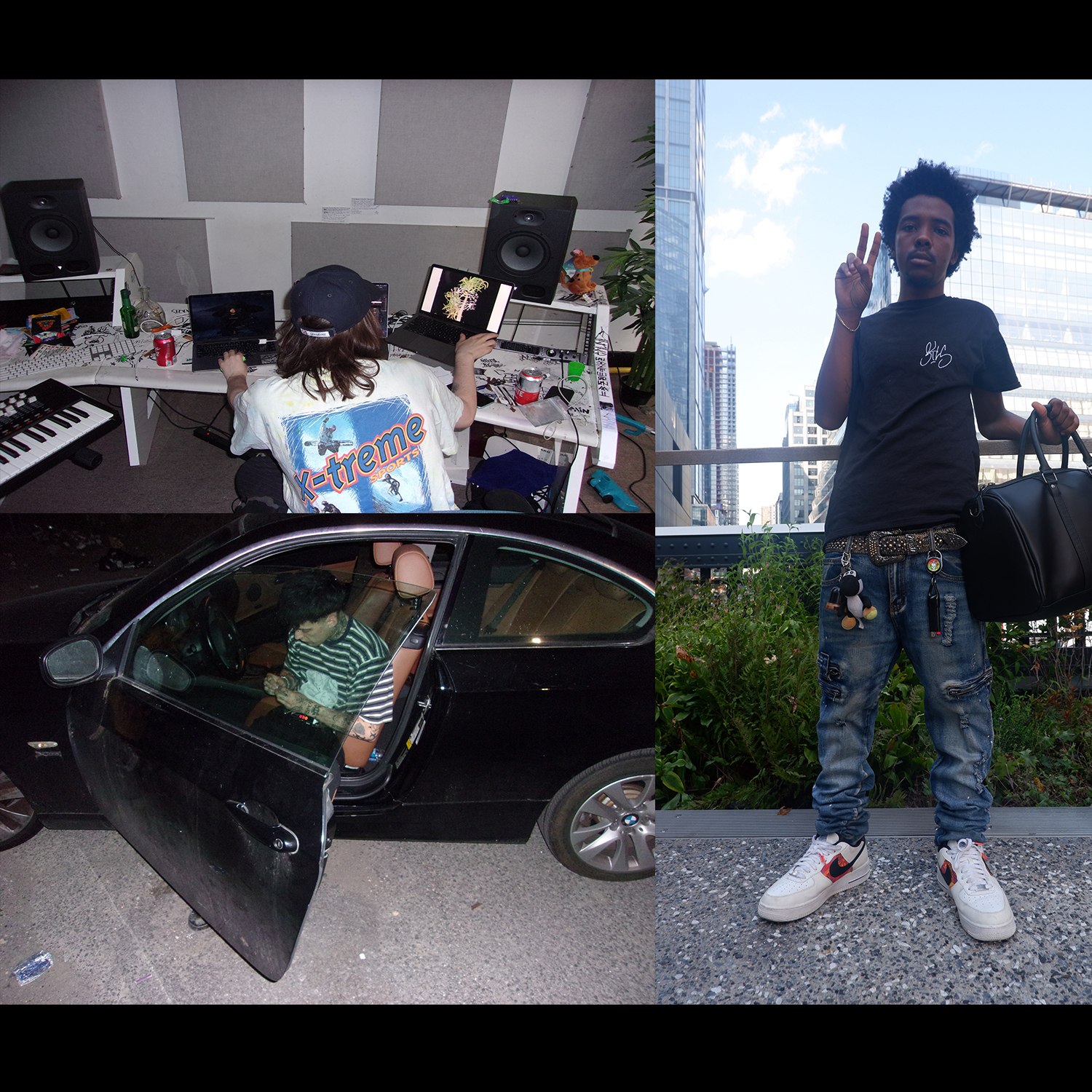 There’s an idea that the internet and social media have made success cheap and facile. It’s a jab that’s frequently thrown at young people who’ve managed to garner fans and attention and a modicum of institutional support thanks to online buzz—the subtext being that clout has usurped talent. It was a charge frequently aimed at Surf Gang’s SoundCloud forebears. Fame is a face tattoo or viral video away these days, right? But in reality, Surf Gang’s members are all modern working artists, which is to say freelancers, exchanging rates and picking up projects whenever they can. As we board the ferry and it breezes past Dumbo and heads towards Red Hook, the members talk a little shop. Goner just cinched his biggest beat sale ever via Instagram story—four for $5000. Harto just sold a verse that was almost too good to give away, and is no longer down to produce work for someone else for less than $1000. The ability to create in multiple mediums and on multiple platforms is a prerequisite, and the young men act accordingly, in a flurry of interlocking and adjacent projects with the drive of young people whose lean times are just barely in the rearview. When I asked Giane how many hours a week he works, he’s quick to fire back: “How many hours are in a week?”

Polo said Surf Gang’s DIY origins continue to color their music. “We worked hard. There’s some artists that have never, never, been through that shit, never. They don’t know what it’s like. Having to be seven people deep in a one bedroom apartment just to make music. Having to finagle all this equipment on your back throughout New York City to try to find another spot to set up in a blitz of a fucking snowstorm. You’re scared to go home because you live so far away and you’re like, ‘If I have to go home, I’m gonna end up missing an opportunity for a free session’ or you’re gonna miss a play on something,” he said. “The first two years of ever knowing Harrison, he lived apartment to apartment, month by month, because every time he moved in somewhere, that was where we were recording. His roommates were just not trusting of the type of crowd he was bringing, or there was too much noise.” Harrison is another Surf Gang producer who also does a lot of the group’s visuals, including merch, album art and promotional material. Later, he talks about finally clicking with a member of the group’s extended universe. “I don’t think he knew who I was,” Harrison says, laughing. “I was just always around.”

What sustained them through the churn? Evidently, each other. Members have the easy rapport that comes from a web of mutual acquaintances, casual name drops, inside jokes, gossip, and omnipresent slang. (The word “fried” is tossed around so often, by different members in different contexts, that I finally have to ask what it means. It’s basically “done, cashed, or burnt out,” Goner explained. A bad thing.) It’s energizing to be around so many people whose affection for each other is natural and timeworn. At one point, Giane mentioned that the group has been frequenting bowling alleys and that he’d like to get a league together—the prospect of custom Surf Gang bowling shirts sounds, objectively, cool as fuck. 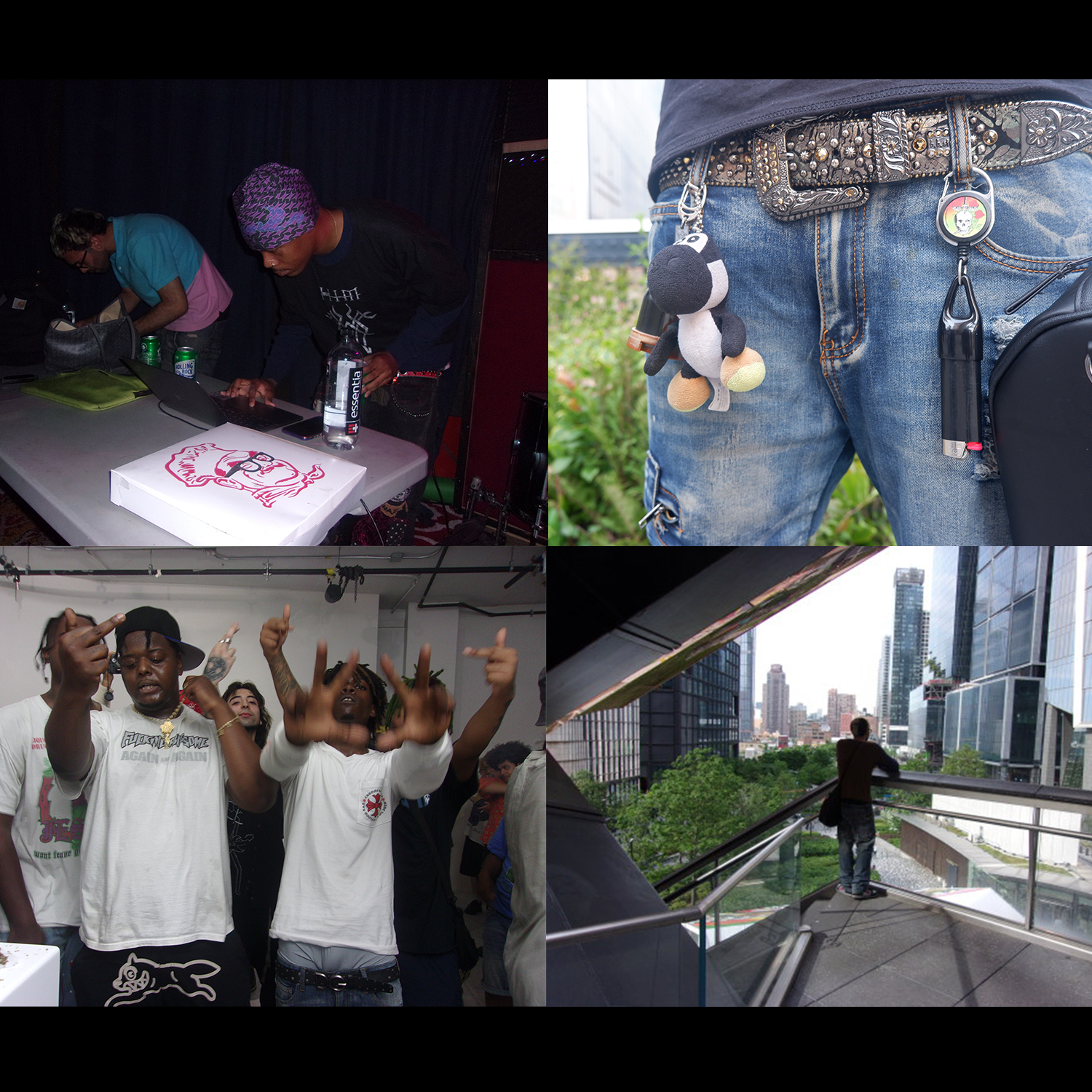 What comes next for a group of young artists on the precipice? Surf Gang likes to imagine the future of Surf Gang as a hub for all kinds of art: visual, design, clothing, and video production alongside the music and the performance. For now, a few concrete goals on the horizon: Giane is playing with the idea of a Halloween show. Polo is releasing ICFM 3, the third entry in a series of albums that he said draws from pain and the numbness that follows it. Harrison is editing a music video (slightly overdue). There’s a Surf Gang documentary in the works, stuffed with live show footage, new music, and behind-the-scenes material. There’s also a torrent of interlocking projects with members of the Surf Gang Extended Universe: Harto and Eera have an upcoming project called Academy, Giane and Harto have an upcoming project too, there’s a G-Plug tape and a third drill tape coming from Moh, two unnamed projects for Moh and Harto, Harrison has also been working on ICFM 3… the list goes on.

Everyone except Eera (finishing up his last year in college) is trying to migrate to Los Angeles to escape the second COVID winter. I say goodbye in Harrison and Harto Falión’s sixth-floor LES walkup, where bud is already being broken up, and suddenly ten people fill the smoke-filled two-bedroom. Some kind of anime is playing on TV, but nobody is really watching. Everyone files in and takes their places, either settling into the big, brown couch or hovering around the computer set-up, where a trio of visitors from out of town have been working on—what else?—music.