Sadia Shepard on the Nuances of Immigration and Cultural Identity 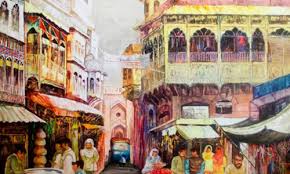 Sadia Shepard on the Nuances of Immigration and Cultural Identity

Your story in this week’s issue, “Foreign-Returned,” is about a Pakistani couple trying to build a successful life in Connecticut. What inspired you to tell their story?

I’m fascinated by the ways in which our family histories and the legacies of our class, racial, and ethnic identities affect the choices we make as adults. I imagine the protagonists of my story, Hassan and Sara, as the grandchildren of the Urdu-speaking migrants who arrived in Pakistan at Partition and helped transform Karachi into the country’s economic center, and I loved thinking about how that past might affect the way they interact with Hassan’s co-worker Hina, a second-generation American whose family hails from Pakistan’s agricultural heartland. Hassan, Sara, and Hina’s Pakistani origins might be seen as equivalent and interchangeable in Stamford, Connecticut, but the reality is that, as these three characters attempt to connect with one another, they are negotiating differences in class, culture, and religious observance. We have a tendency to think of specific immigrant populations as monolithic, but what I’ve seen within my own Pakistani-American family is much more nuanced. My late mother came to the United States in the early sixties, when there were very few immigrants from South Asia, and in her early years here she was often treated as a kind of unofficial cultural ambassador, which became an intrinsic part of her personality. My mother’s experience was, of course, radically different from that of other members of my family who migrated here later, after there had been significant changes in U.S. immigration policy, in 1965, 1992, and, especially, post-9/11. I wanted to investigate some of those variations, and the ways in which they impact Hassan and Sara, as they begin their life in Connecticut.

The first draft of “Foreign-Returned” that I read predated the 2016 election. In this version, the election and its results form an important backdrop to Hassan, Sara, and Hina’s story. How did the election become integral to the narrative as you were revising?

In my original draft, my aim was to explore how Hina, who grew up in the Pakistani diaspora, might interpret or react to her religious and cultural identity markedly differently than Hassan and Sara, who are products of Karachi. I wanted to play with how Hassan and Sara’s having moved from an anchored life in a cosmopolitan urban center to a relatively anonymous existence in the Connecticut suburbs might affect the couple’s increasingly fluid and unstable sense of self. Then, as I was revising the story prior to the Presidential election and during the first months of the new Administration, I found myself wondering what Hassan, Sara, and Hina would think of the election cycle and how each of them might be affected by the increasingly toxic rhetoric around Muslims and immigration. It had always been important to me that Hassan was in the United States on an H1-B visa—my hope was to portray some of the precariousness he might feel at being in this country as an economic migrant, even one with a job in finance. Now I wondered, how might Hassan feel about his position, and his potential future in Connecticut, if the H1-B, and the status and future of immigrants in general, was constantly being called into question? How might the daily onslaught of news about the election affect Sara, who doesn’t have a job and has time to become obsessed with every fresh headline? Would this political moment be galvanizing or paralyzing for Hina? I realized that, if I set the story in the latter half of 2016, then Hassan’s ambivalence about his future in the United States might be a logical reaction to the election. When I imagined Sara, I saw her spending a lot of time indoors, devouring cable news. And it made sense to me that Hina would become politically active and travel to Pennsylvania to canvass and register voters with her women’s group. Many aspects of the revision fell into place once I was able to place the narrative within a very specific time frame.

Hina, who wears a head scarf, is assaulted while canvassing for the Democratic Party. Did you draw on real-life events for that scene?

During the lead-up to the election I became troubled by what appeared to be a causal relationship between the anti-Muslim rhetoric in our political discourse and a sharp rise in acts of anti-Muslim bias. I began to think about my Muslim family, friends, and students, some of whom wear the hijab as an expression of their faith and identity, and the ways in which their increased visibility made them and others like them a target of curiosity, and even, in some cases, violence. As I was developing the description of Hina’s assault, I read reports and news articles about hate crimes in the hope of making the emotional reality of the scene feel true, but the specific details of the incident are the product of my imagination. My aim was both to connect my belief that anti-Muslim speech in political culture can act as a kind of permission for racist behavior and to show how Hina processes and unpacks this experience after the fact. I wanted the assault to be relatively minor physically, because so often acts of intimidation or harassment against women that don’t end in extreme violence are brushed off, and it’s assumed that the woman will recover quickly. The reality, of course, is that this experience weighs heavily on Hina’s psyche. I also wanted to imply that after Hassan hears Hina tell her story he must wrestle in a new way with the question of whether he and Sara should remain in the United States.

Hassan doesn’t seem particularly ambitious, but it must have taken some drive for him to move himself and Sara from Karachi to New York. Why did he choose to try to build a life in the U.S.?

I’m interested in the expectations and ambitions that might propel young people from my family’s ethnic community, the muhajirs, to leave Pakistan for the United States, and what happens after they arrive and must square their aspiration with the reality. I think that Hassan’s ambition is centered on leaving Pakistan in order to participate in the persistent lure of the American Dream, but I don’t think he’s ever stopped long enough to consider whether a life in the United States is really what he wants. I imagine Hassan and Sara as people who have, until this point in their lives, fulfilled most of the expectations of their families and communities: they’ve completed their degrees, married appropriately, secured a coveted finance job, and made the move to the United States. Now, presumably, Hassan will work toward a promotion, Sara will get pregnant, and they will both become respected members of a Pakistani-American community. I am curious about what happens to these characters when their ambitions prove to be difficult to realize.

Sara’s interest in social status can seem petty. But, when it comes down to it, Mona is the person who encourages her in that direction. How likable are Mona and Ali, ultimately?

I see Sara as someone who is trying to adapt to social rules that are largely unfamiliar to her. In Connecticut, she struggles to find meaning, to find community, and to conceive a child. Mona and Ali and the guests at their parties are the only people Sara knows in the Stamford area other than her husband, and when the Ahmeds cut ties with the couple the loss of the friendship is disorienting. I’m not sure that Mona and Ali are entirely sympathetic characters, or even that Sara and Hassan are ultimately particularly fond of them. But the Ahmeds do hold a certain power, as the gatekeepers of a very specific world. I see Mona and Ali as symbolic of Sara and Hassan’s imagined, successful life in the United States—a life that remains perpetually out of reach.

Did you feel the influence of any other short-story writers when working on “Foreign-Returned”?

This story owes a great debt to one of my favorite short-story writers, Mavis Gallant, and specifically to her story “The Ice Wagon Going Down the Street.” “Ice Wagon” is a story that I return to year after year, trying to put my finger on what the peculiar alchemy between her characters is and why the story works the way that it does. I remember reading Gallant’s story—which is largely about Canadians working in Geneva—and thinking, This feels so Pakistani. Gallant’s ability to create a fictional world that conveys a sense of truth that feels universal, or that might be applicable to a completely different context, is incredibly exciting to me. I am also influenced by the great Urdu short story writer Saadat Hasan Manto, whose economy of language reminds me to try to say more with less, and by Qurratulain Hyder, who interweaves political reality, social anxiety, and the power of exile in order to physically and mentally unmoor the female characters in her short fiction.

You published a nonfiction book, “The Girl from Foreign”—a memoir about your travels through your family’s three-country, three-religion history—in 2008. You’re also a documentary filmmaker. But I believe that this is your first published fiction piece. Is this a new start for you as a writer?

“Foreign-Returned” is my first published short story, and I could not be more thrilled that it has found a home at The New Yorker. As a nonfiction writer and a filmmaker, my process is anchored in gathering raw material from other people’s lives and then telling a story that I hope is true to their experience. As a fiction writer, I find it incredibly liberating not to be limited by what I am able to collect in the field—to be able to draw from research and from my own life, to marry disparate elements or ideas, and to move backward and forward in time. When I write fiction, my gender, my nationality, even the laws of time and geography, are permeable borders. This story is part of a collection that draws on the visual details of what we bring with us, what we leave behind, how we selectively appropriate and customize objects, appearances, and environments. I’m absorbed by the narratives we carry with us and how they inform and shape who we are, as well as by the idea that our migrations are not always linear paths from old country to new country but in fact a navigation, or a re-navigation, of multiple trajectories.

Deborah Treisman is The New Yorker’s fiction editor and the host of its Fiction Podcast.