Had a blast in Biloxi but now it's back home and getting ready to go to Toledo Bend Lake for a week. Today's guest has visited often, so please welcome Stacey Weeks back with a peek into her book, To Sweet Beginnings in Sycamore Hill! 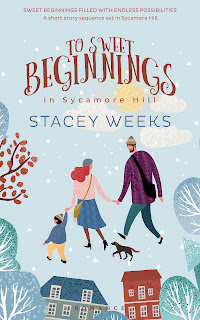 When a whistleblower speaks up, she tips the first domino of a twenty-four-hour chain reaction on the eve of Sycamore Hill’s most important holiday event. A baker gets a career-making opportunity, a reporter chases the truth, a woman faces her greatest fear, and a lost child returns as the dominos continue to fall. The residents of Sycamore Hill approach a new year, and five couples celebrate sweet beginnings filled with endless possibilities in this short story sequence.
Excerpt: This wasn’t quite the triumphant return Gloria Sycamore had always imagined. She tugged up the hood of her winter coat with one hand and tipped her chin down. She clutched a file folder to her chest. Her downcast gaze made the likelihood of being recognized slim.

Gloria pointed herself in the direction of the library and merged with the foot traffic on Main Street. The archives should have copies of the newspapers from when her life imploded. Not that she wanted to relive those moments, but she needed to look at the articles with fresh eyes and a clear head. She didn’t trust her memory. Or maybe she didn’t want to believe what she suspected.
She’d be in and out, and no one would be the wiser. If she was wrong, no one would know she was here. But if she was right, everyone would know. Her chest tightened, and she swallowed a lump swelling in her throat. She knew what really happened that day, and more importantly, God knew the truth. But if that was right, why did she feel like a scolded dog slinking into town with its tail between its legs?
“Good afternoon,” a cheery voice called from the doorway of a bakery.
Trepidation tightened her core. Her grip on the folder stiffened as she lifted her face. A man with a white apron tied around his waist rested his gloved hands on the handle of his snow shovel.
Relief loosened the knots in her belly. Her face relaxed into a smile as she flicked her eyes to The Muffin Man’s gilded sign. Cute.
He bent at the waist, whistling a holiday melody as he resumed his chore. She knew the minute the proprietor noticed her heeled, leather, took-an-entire-paycheck-but-she-deserved-them boots. His whistling faltered. Gloria flattened her lips. Apparently, some fashion trends hadn’t trickled down to Sycamore Hill. She buried her mouth and nose under her scarf and avoided making eye contact with anyone else as she hurried away. Every click of her booted heel seemed to scream; you don’t belong, you don’t belong.
“Look out!” A group of teenagers brushed past her and bumped her shoulder. They knocked the file from her hands, and she turned her ankle in her ridiculous heels, landing palms down on the pavement. The breeze snatched the loose papers.
Sycamore Hill: One. Gloria: Zero.
As one page scraped and danced down the sidewalk, she pinched her eyes shut. Dampness seeped through her knees, and her palms burned from the cold. She inhaled a deep, slow breath, but it didn’t slow her racing pulse. Her imagination was on overdrive. They were just kids. She hadn’t been targeted. No one even knew she was back. Sycamore Hill had been one funeral away from claiming ghost town status when Gloria shook its dust from her feet. It would seem that the sleepy settlement had woken up during her years away.
Sycamore Hill: Two. Gloria: Still zero.
“Is this yours?” A hand extended the rescued newspaper page waltzing with the wind.
Gloria skipped over the headlines. She had them memorized. Experimental Drug from Emergence Pharmaceuticals Shows Promise. Income Opportunity Knocks at the Door of Life House. Her attention lingered on the picture of her former bio-medical lab partner. Tiff’s confident grin stared back at her. She always did take a good photo. With her arms folded across the front of a starched white lab coat, she looked every bit the part of a trustworthy professional. But Gloria knew better.
“It is. Thank you!” Gloria pushed herself to her feet, but she crumpled when she put weight on her ankle.
The man cupped her elbow. “Let me help you.”
Gloria fumbled out another thank you. It had been a long time since anyone offered her assistance. If enough new blood pulsed through the town’s veins, maybe her scandal was ancient history? Lord, please let it be so!
A gust of wind blew back her hood as she lifted her face to her Good Samaritan. Little wisps of blonde curled out from under the edge of a dark knitted cap with a brown leather label. Her mouth fell open.
Recognition dawned in his eyes. “Gloria?”
Owen Mason’s once lanky frame had filled out during her absence. His shoulders were broader than before, and even in a winter jacket, she could tell he narrowed nicely at the waist. The twinkle in his eyes dimmed as her delay in responding lengthened.
Say something. Anything.
She bit the inside of her cheek. She couldn’t seem to push words around her suddenly swollen throat and thick tongue. Once she confirmed her identity, he’d walk away. She hadn’t just abandoned Sycamore Hill; she’d rejected everything the small town stood for, including him. It was the only way she could cope.
A vertical line etched between his eyebrows as he drew them together.
Say words. Any words will do.
Heat burned her skin as she recalled their last interaction. His smile faded. She’d left Owen with only a letter to explain why.
“Hi, Owen.” It came out deep and raw. Then, as if her eyes had a mind of their own, her gaze trailed down all the way to his bare ring finger. Her stomach hopscotched. When she lifted her face again, the corner of his lips twitched.
He inhaled a large, deep, savouring breath.
Sycamore Hill: Two. Gloria: One.
Finally, she was on the scoreboard. 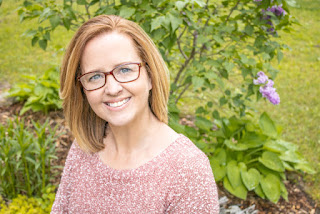 Stacey is a mother of three, a sipper of hot tea with honey, and loves to share the hope of Christ with women. She has a graduate certificate for Women in Ministry, is a multi-award-winning author and novelist and is a frequent conference speaker. Find more information at StaceyWeeks.com
Sign up to receive Stacey's Newsletter and get a free short story!
Find/Follow Stacey on...
Facebook: www.facebook.com/writerSWeeks
Twitter: @writerSWeeks
Instagram: @writerSWeeks
To Sweet Beginnings in Sycamore Hill can be purchases at many online retailers found HERE.
GREAT spotlight, Stacey. Thanks for sharing! We certainly wish you the best of luck and God's blessings with your book.
Until next time, Friends take care and be BLESSED
PamT
Back to News
Use left/right arrows to navigate the slideshow or swipe left/right if using a mobile device