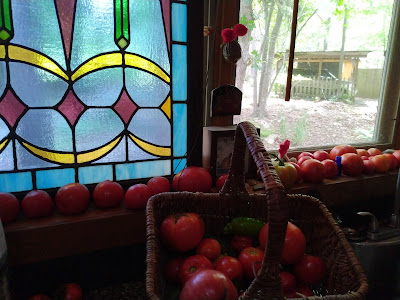 Hello, friends.  Last week, I canned yellow squash and tomatoes.  Instead of the usual raw pack canning of tomatoes, I tried stewing them for the first time, and canned the juice separately.  I'm thinking stewed should made a nicer sauce.  The time and effort seemed to be approximately the same, but I liked not having to deal with the steaming pot to remove skins, and then the ice bath afterwards.  The recipe I used left the skins on, so I did too.  I've done that with cherry tomatoes used in canning, and they were fine.  Another day, I blanched and froze lambs quarter.  Cucumbers, tomatoes, yellow squash, tromboncino, eggplant, blueberries, a very few blackberries, parsley, oregano, basil, the first green beans and lambs quarter were harvested.  At Aldi, I bought a pineapple for $1.49, which is the cheapest I've seen in a long time.  I keep looking for the .99 pineapples I  read about people finding, but never see any in this area.  If I did, I'd try canning them, as they're doing.  J was given a large bag of local sweet corn, and froze most of it, after enjoying several ears. 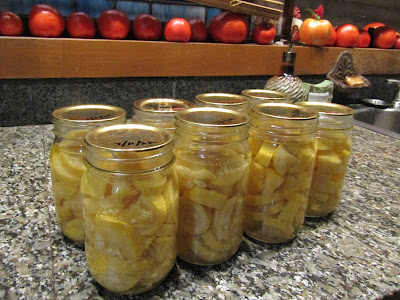 I met my sister for a thrifting day, and found a dress to wear to the 70's disco dance party we're going to in August.  It's polyester, with a 70's looking pattern, and flared sleeves.  J had sent me a link for an outfit online, but it was $50, and I refuse to pay that to wear for one night.  The dress should have been $2, but I think ended up being $4 at the thrift store, still a great savings.  I also found J a fleece work vest, which was either $2 or $4, and a scarf for the dance outfit for $1.  We stopped by a produce stand, and I picked up a cantaloupe for $3.  Not a great deal, but cheaper than the stores have been here.  I shared cucumbers with my sister.  After I dropped her back at her car, I shopped at Food Lion, where I found someone had left coupons in the cart, including one for $3 off  $20.

We got rid of our two "extra" roosters, after J listed them online.  A woman and her small son came to pick them up, and though we didn't ask directly, we believe they will be additions to their farm nearby.  Though, in these times, I couldn't begrudge anyone wanting to put food by, I'm hoping they're living their best lives, with a flock of their own.  As the weeks go by, the littlest "RI Red" chicks are appearing to be bantams or some other small breed.  They're definitely not RI Reds.  We lost one of our Americauna hens last week.  She was just sitting near the door to their yard when I went out in the morning, and when I went to check on her a little while later, she was already gone, though she didn't appear to be struggling to breathe or any other signs.  I knew when she let me pet her that she must be pretty sick.  I continue soaking scratch grains overnight for the chickens, and giving them a mixture of banana peels, and whatever else I have that day.  Lately it's been chopped figs, grated cucumber, sometimes chopped tomatoes that have been pecked on by birds.  The day I canned tomatoes, they got all the seeds I had strained out for juice.  J glued one of the legs on the recently thrifted gateleg table, and I stained a small block he had replaced on it.

Cole slaw was made with our cabbage and carrots, and J had the other cabbage half with potatoes one night.  I dehydrated the cut off tomato tops from canning for suet, and a few mushrooms that needed to be used, to add to the soup mix.  I planted the ends of one celery, and four lettuce in the garden.  Like last year, it doesn't look as though the celery is doing anything, but one lettuce appears to be growing slightly so far.  We have lots of melons and winter squash growing on the vines.  I keep finding various seedlings eaten off.  This week, it was lettuce and nasturtium.  In place of the nasturtium, I transplanted wintersown portulaca.   For the lettuce, we did a project we've been talking about for some time, which is making holes in a large piece of styrofoam for the pots, and floating the pots in our pond.  It supposedly keeps the lettuce cool enough to be happy during the summer, and the water has enough nutrients in it to help them thrive.  I planted four pots to start.  If they do well, we plan to add more. 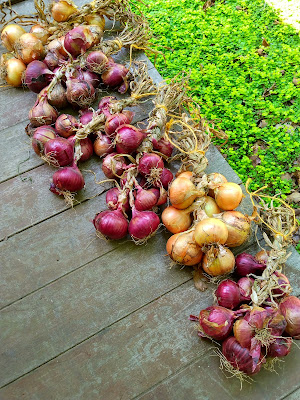 I made a peach cobbler for J, with some of the peaches a neighbor gave him, and some flour that needs using, as I'm GF now.  I started another MM cleanse this week, so it seemed a good time to do that.  For the cleanse, I've been able to use kale, tomatoes, herbs, garlic and cucumber from the garden in meals.  We've been able to open up at night, to take advantage of the fresh and cooler air, and got a small amount of rain.  I cleaned the chicken coop, and cut spearmint and southernwood sprigs to place in the coop and nest boxes.  While braiding onions on the porch with the pups, I saw a green snake fall from the roof.  It took me a minute to realize an anole lizard had it in it's mouth.  They battled for two or three minutes before the anole let the snake go.  I figure the snake had probably gone after the anole, and he was having no part of it!  Nature is something to behold.

We had guests on Sunday.  They appreciated the photos of the garden I shared on social media, and asked if they could come out.  I was gifted a piece of a new to me herb, called papalo.  It's sometimes compared to cilantro, and has a strong scent and taste.  I've got it in water, to see if it will grow roots.  I was also given a bag of worm castings, an excellent gift for a gardener.  Cucumbers and tomatoes were shared.  J sowed carrot seeds.  I did a little bit of weed eating before the battery died.  By the time it was charged, I was onto other things.  J and I do Wordle and the spelling bee it links to pretty much every day, and compare.  As we do the free version of spelling bee, it cuts us off at some point, so I sometimes also do a free version called Free Bee, which does not cut you off.  It's the little things.  Be well, friends.