Tempeh, the OG of Fermented Foods, Is Having a Moment

Forty-two years ago, when Seth Tibbott was 26, he visited a hippie commune in Tennessee called The Farm. A vegetarian since reading Frances Moore Lapps Diet for a Small Planet in 1971, he had been subsisting on vegetables and homemade soy grit burgers.

They tasted bad and they digested worse, Tibbott recalls. But while browsing the literature at The Farm, he learned about a fermented soybean product called tempeh. So when I read that tempeh was this really digestible and fairly easy-to-make-thing, I was really intrigued. At the time, he was working for the Youth Conservation Corps at Kinser Park. So he ordered some tempeh starter from The Farm and, a week later, he set about making his first batch.

I got some soybeans and hand-hulled them, put the magic starter on them, put them out in the field. For tempeh to ferment properly, you ideally need temperatures of 88 degrees, and Tennessees hot weather was perfect. The next day, I went out there was this beautiful white cake on the soybeans. I brought it back to my co-workers and they looked at it and (they later told me) thought, We werent sure we were gonna survive! But theyd been drinking beer, so their defenses were down, says Tibbot, with a chuckle. Several of them went on to become early customers of his first commercial tempeh. 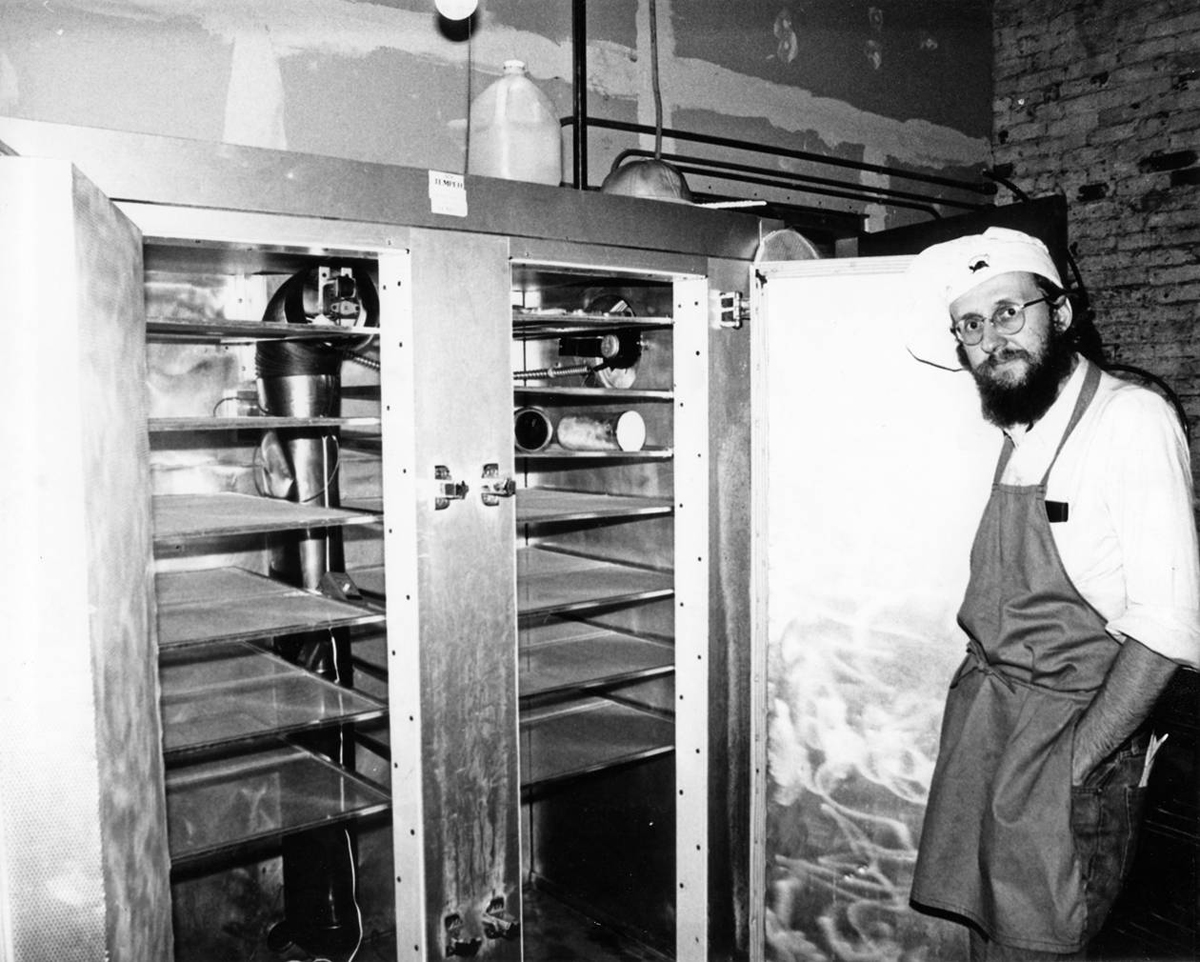 Seth Tibbott in front of his first tempeh incubator, in 1980. (Photo courtesy of Seth Tibbott)

In 1980, in Oregon, Tibbot launched Turtle Island Soy Dairy, the company now known as Tofurky. But what few people know is that Tofurkyfamous for its turkey-alternative tofu holiday roastbegan with the lesser-known soy product, tempeh. Fermented with Rhizopus mold, tempeh is a soybean product originally from Indonesia. But it can be made with any beans, seeds, or even noodles. For the first 15 years, the company was barely breaking even. Today, Tofurky has estimated sales of $40 million a year, and Tibbott says tempeh is one of the companys fastest-growing product lines, increasing 17 percent from 2017 to 2018. 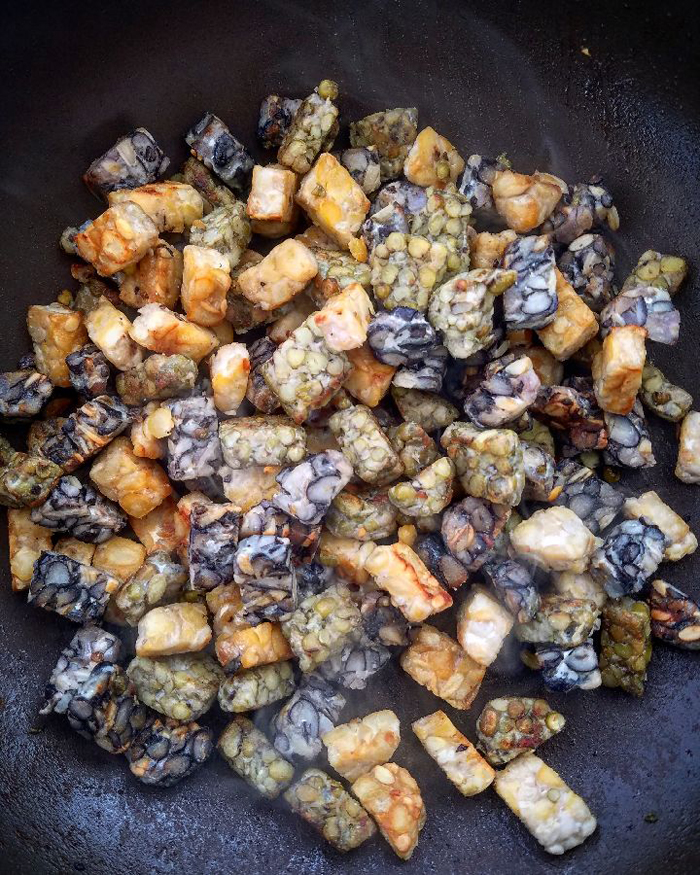 Some of Squirrel and Crows tempeh varieties.

Tibbott was 40 years ahead of the curve. With the popularity of plant-based burgers and fermented foods on the rise, tempeh is having a moment. With its nutty flavor and meaty texture, tempeh fries up nicely for stir-fry, tacos, or in place of a burger. Unlike the Impossible Burger (which relies on GMO soy, and, as a result, the use of glyphosate) and ultra-processed plant-based meat substitutes, tempeh has only two ingredients: beans and culture. Its also a nutritional powerhouse, containing almost as much protein as beef (without the saturated fat or cholesterol), all eight essential amino acids, calcium, iron, and zinc.

Though tempeh sales are still a fraction of all plant-based meat sales, there are dozens of new artisanal tempeh companies sprouting up around the countryfrom Squirrel and Crow in Portland, Oregon to Tempeh Tantrum in Minneapolis to Barrys Tempeh in Brooklyn. And its not just popular at food co-opsits on the menu at pizza franchise Mellow Mushrooms 150 locations across the Southeast, Native Foods nine restaurants, and at high-end restaurants like Cafe Sunflower in Atlanta and Farm Spirit in Portland. You can even get a tempeh bowl at Dodger Stadium in Los Angeles. Tempeh is like the OG fermented food, Tibbott says.

Tempeh even has its own organization, the Indonesian Tempe Movement(without the h on the end), dedicated to increasing international awareness of tempeh and teaching everyone from hipsters to the incarcerated how to make it. Last winter, two food entrepreneurs in Portland, Oregon, Mike Hillis and Willie Chambers, formed a U.S. offshoot called the Tempeh Movement. They see themselves as tempeh ambassadors, spreading the good news of tempeh.

But tempehs most tireless champion may be 27-year-old Amadeus Driando (Ando) Ahnan, who co-founded, with his mother and grandfather, the Indonesian Tempe Movement. Ahnan, who grew up in Jakarta and now lives in western Massachusetts, jokes that he was weaned on tempeh. But his real conversion came when he was an adult and was seeking a protein source that would help him bulk up for weightlifting. He realized that tempeh, the food he grew up eating every day, was protein-rich and left him feeling less bloated than beef. I thought, This is amazing! How could something that cheap have the same quantity of protein as beef? says Ahnan.

Around the same time, his mom, Wida Winarno, had taken a fermented foods class where she learned about the importance of tempeh in promoting gut health, and his grandfather, the respected Indonesian food scientist, F.G. Winarno, returned from a colleagues seminar on the health benefits of tempeh. The serendipity was too much to ignore.

I thought, We should make an international conference on tempeh, says Ahnan. In 2015, the trio founded the Tempe Movement, starting with an online campaign that promoted tempeh as an affordable, nutritious, and sustainable food. In Indonesia, as in other developing countries, eating meat has become a sign of status and wealth. Tempeh, Ahnan says, is seen as the food of the poor. Ahnan and his family wanted to flip the script. We made cartoons and videos saying Hey, do not be ashamed if you like tempeh! says Ahan. We want to make tempeh cool.

Today, Ahnan is getting his Ph.D. in food science at the University of Massachusetts at Amherst. (His focus is on tempehs potential anti-cancer properties.) In his spare time, hes designed the prototype for a tempeh-making machine called Tempeasy, which makes tempeh as simple to make at home as bread or yogurt. Hes also the co-founder of tempeh company Better Nature Foods. The company will launch in the United Kingdom in January with six products, including tempeh rashers (i.e., bacon), tempeh mince, and smoked soy tempeh. I would say that if I have my lifes calling, its tempeh, says Ahnan.

Last March, Ahnan organized an eco-tempeh tour across the island of Java for a group of tempeh lovers and entrepreneurs from the U.S. and England, including Tibbott, Hillis, and Chambers.

Hillis discovered tempeh at a Grateful Dead concert in 1988 and then again through his wife, Priska, who is Indonesian. (At their wedding in Bali, his wifes great-grandmother from Java watched him scarf down fried strips of tempeh and said to Priska, Youre in good hands. Hell eat your cooking!) A few years ago, he introduced tempeh to Chambers, a former butcher who now works as a chef at the Sunrise Community Center in Portlands Rockwood neighborhood. 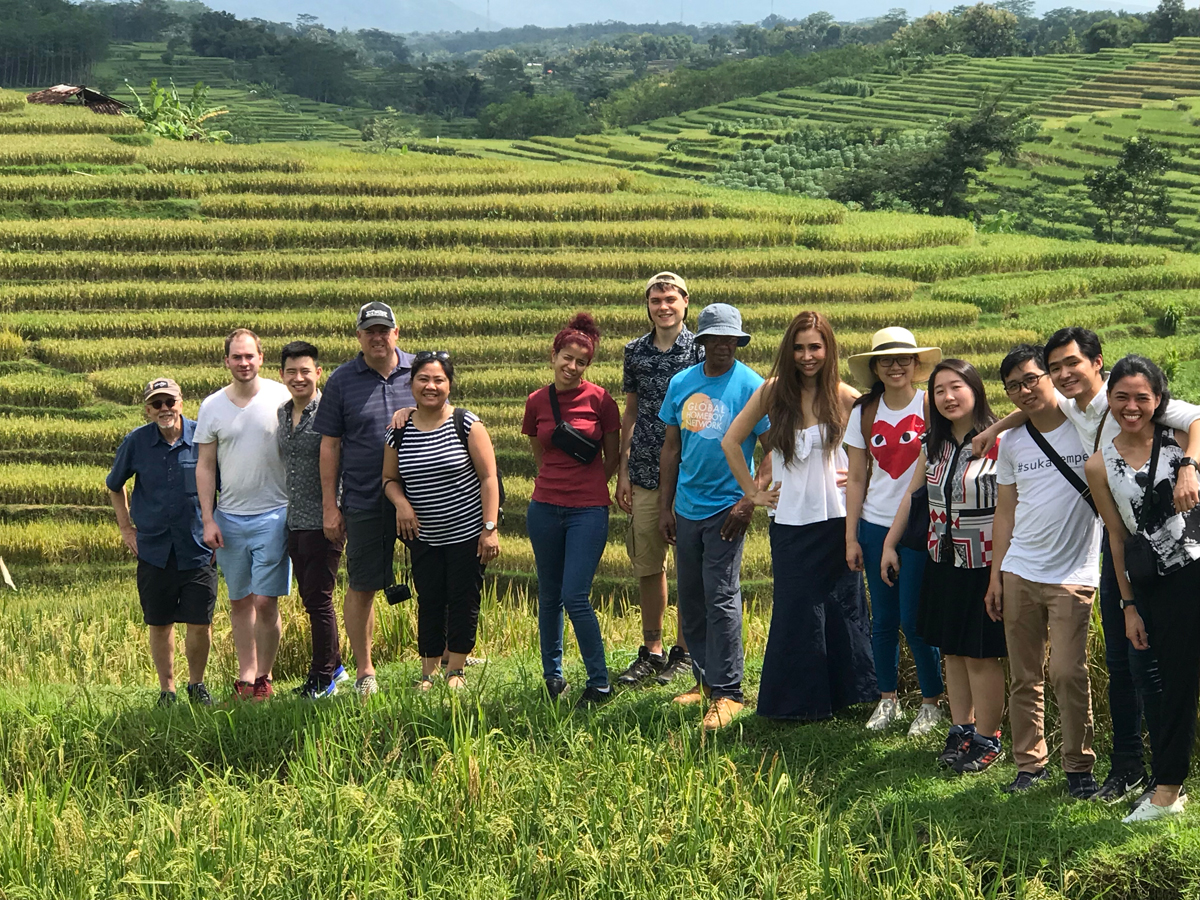 On the tempeh tour of Indonesia. (Photo courtesy of Better Nature Foods)

I was like, Oh! Tempeh is fermented. That was the thing that won me over, says Chambers, who is also fond of kombucha, the much-hyped fermented tea. Chambers thinks tempeh is where kombucha was 10 years agoon the cusp of ubiquity. Now you can buy kombucha in gas stations! he says.

The trip to Java allowed them to learn traditional tempeh-making practices from Indonesian women who have been doing it their whole lives. This fall, they hosted a tempeh event at Wajan, a new Indonesian restaurant in Portland where Tibbott spoke and guests got to sample several tempeh dishes.

Hillis and Chambers have big plans for the future, including community tempeh-making classes and getting tempeh into institutional settings like prisons and hospitals. We want to introduce it to a much wider demographic, says Hillis. They believe tempeh has the potential to bridge the urban-rural divide. How many soybean farmers live 50 miles away from economically distressed urban centers that dont have enough food to eat? Tempeh can be a very powerful diplomatic tool. 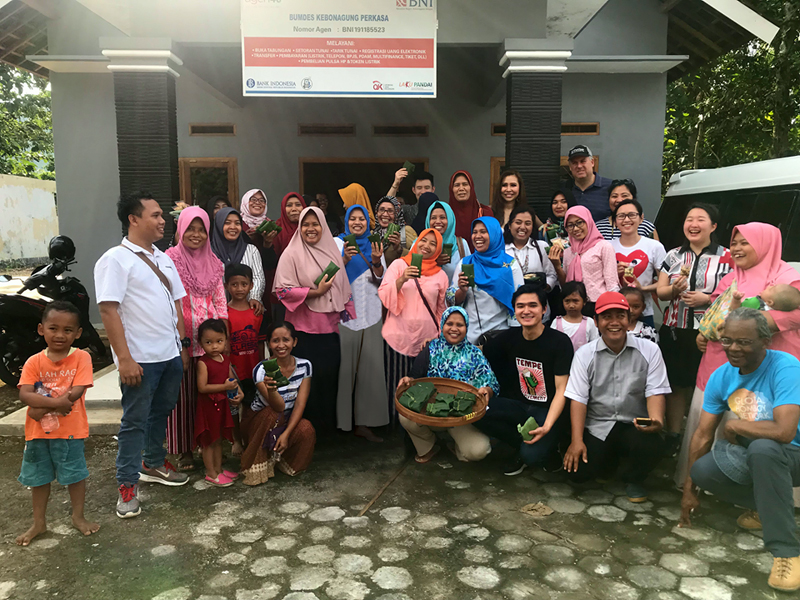 To get there, though, tempeh has a number of obstacles to surmountmost notably an unfair reputation as a strange dish for hippies, but also, Tibbott thinks, a lack of value-added products on the market. (Mike Hillis is working on a savory tempeh snack called Tempeh Manis that tastes a bit like Chex Mix.) But the main key to tempehs ascendence may be the startling difference between fresh and pasteurized tempeh.

In Indonesia, where every small town has a tempeh-maker, tempeh is still fermented in banana leaves. Its also rarely pasteurized. Even in the big grocery stores, most of the tempeh they make is in banana leaves, says Tibbott.

But all the major tempeh brands in the U.S.Surata, Tofurky, and LightLifepasteurize their tempeh to give it a longer shelf life. Fresh tempeh will keep fermenting at room temperatureand even in the fridge. Most of the smaller tempeh startups in the U.S. are selling unpasteurized tempeh.

John Westdahl, co-founder of Squirrel and Crow in Portland, makes a variety of fresh tempeh recipes: chickpeas with quinoa, black bean with sunflower seeds, even nixtamalized corn, pumpkin seeds, and beans. He does not make a soy tempeh mostly because there are two giant tempeh companies in Oregon that already do that well. It was more or less a business decision to stand out, he says.

A nice coincidence: many health-conscious Portlanders are trying to limit soy intake because of its estrogen-mimicking effects or because it is a common allergen. Despite rumors, dietary soy has not been linked with an increased risk of any cancer. The benefits of fresh tempeh, Westdahl says, include that it just tastes better. When its pasteurized, you dont taste the fungus in itwhich is quite nice and complex. 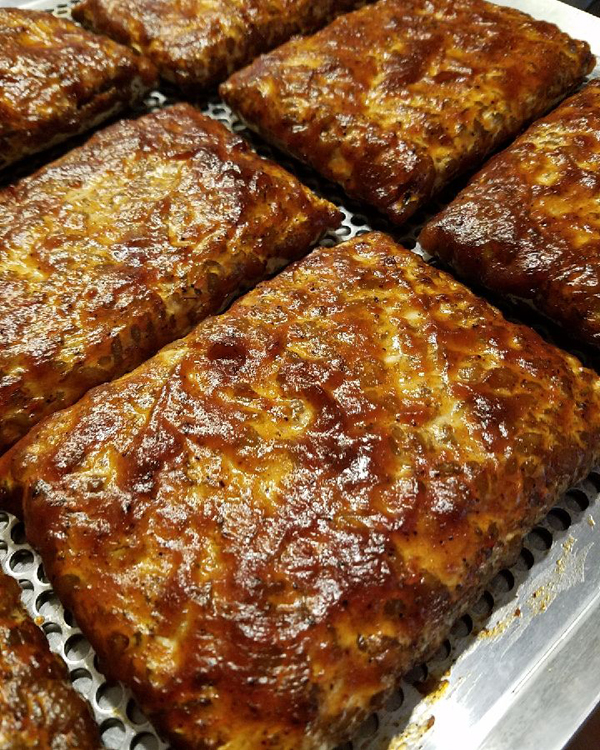 Ahnan agrees, saying theres also a texture change. When its pasteurized, it loses its fluffiness, he says. Its best to eat fresh tempeh within three daysunless youre curious to try overripe tempeh, known as tempe bosok, a delicacy in Indonesia. Over-fermented tempeh produces a lot of umami compounds, says Ahnan. He likes it in a coconut-based curry called sambal tumpang.

Despite tempehs new-found popularity, home cooks are still a bit clueless when it comes to preparing it, says Westdahl. At the farmers markets where he sells his non-soy tempeh, he offers tips. I try to read them to find out what their skill-set is. It can be put into any recipeits almost too versatile a food, he says. So I ask, Are you a burger person? Do you like stir-fry? His favorite way to prepare it is a traditional Indonesian dish called orek. The first time I made orekits like sticky glazed deep-fried tempeh. Its gingery, garlicky. Its like heaven on earth.

Many eaters are just starting to discover how tasty tempeh is. But Westdahl, Ahnan, Tibbott and many other tempeh evangelists believe that once they try itwhether at a high-end restaurant or in their own kitchenstheyll be converts.

The post Tempeh, the OG of Fermented Foods, Is Having a Moment appeared first on Civil Eats.