As someone who grew up watching Gossip Girl and trying to figure out how to serve equal parts Blair Waldorf and Jenny Humphrey, I’m not embarrassed to say I was beyond excited to be added to the Close Friends list of the official Gossip Girl Instagram account. It’s no more than a great marketing scheme, but damn, did it work! Since then, I’ve been particularly invested in the remake, coming July 8 to HBO Max. But I won’t lie—it’s not the plotlines I’m looking forward to. It’s the fashion.

It’s no coincidence that Fendi baguettes came back into fashion around the same time that a Sex And The City spinoff was announced. When our old favorite shows make a comeback, so do the nostalgic trends that go along with them. And while all the characters on Gossip Girl had unique personal styles—Blair was polished and put-together, Serena was effortless and boho, Jenny was edgy and wannabe-punk—the overarching aesthetic in the first few seasons is definitely prep school chic.

As the student judged one another from the Met steps, they wore plaid-skirted ensembles not at all like the dowdy uniforms I remember being required to wear during my time at private school. A super-short hem or unbuttoned blouse? The nuns would’ve had me repenting in detention in a heartbeat.

But at Constance Billard School For Girls, it seems no rules apply when it comes to uniform styling. 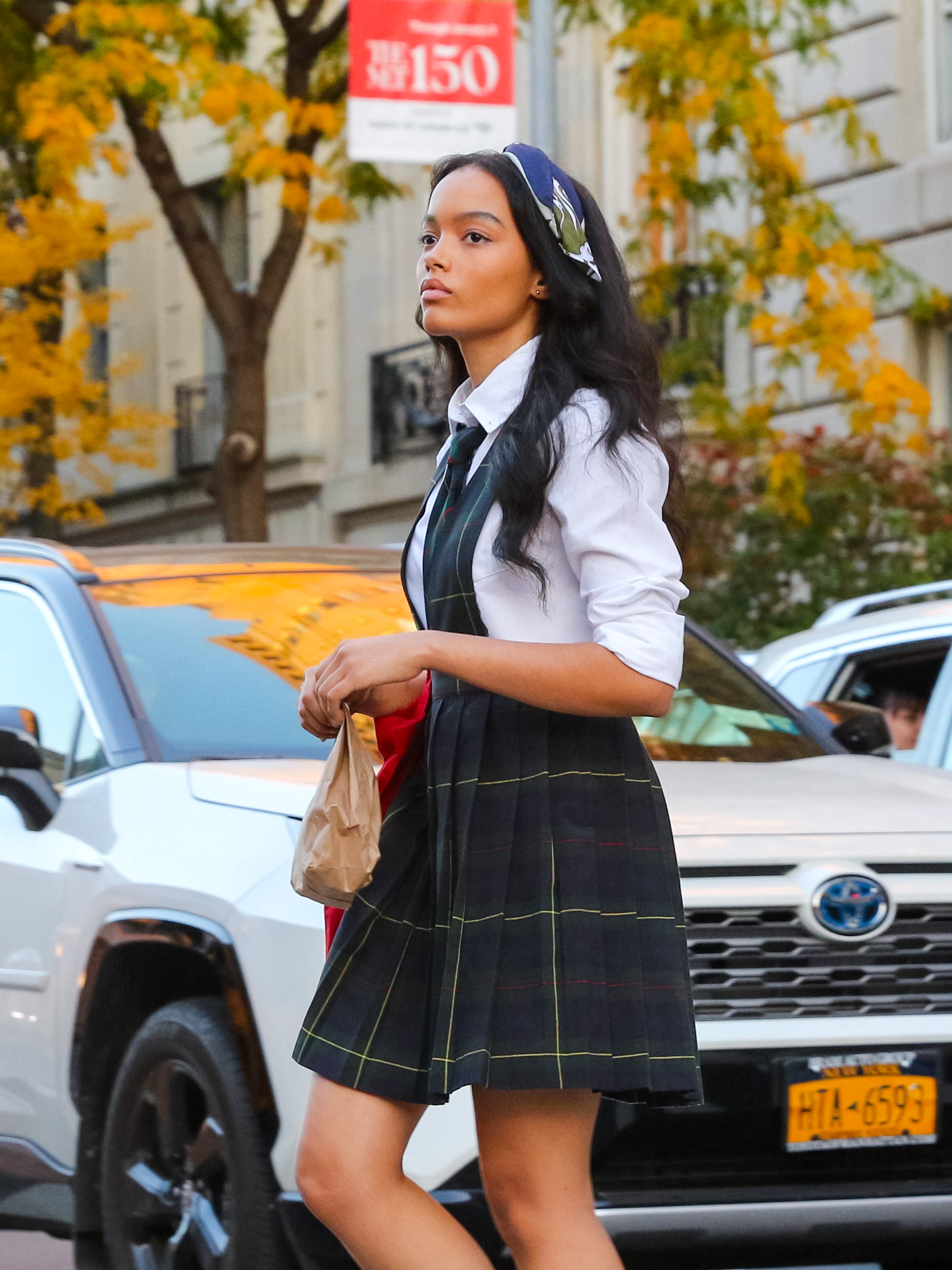 Other than the aforementioned plaid skirt, no two uniforms in the original series looked the same. Serena often showed up with her Oxford shirt untucked, a loose men’s tie draped around her neck and a hobo bag at her side. Meanwhile, Blair styled hers with everything from patterned tights to ruffled blouses to ostentatious headbands. Did Headmistress Queller simply not give a damn about the school’s dress code?!

I digress—in the remake, the characters may be different but the overall unconcerned attitude about classroom attire remains. And given Gen Z’s obsession with Dark Academia aesthetics, it’s no surprise the new crew is all about edging up their prep school style.

Kate Keller opts for a yo-pro look with pixie pants, a lacy blouse and a patterned ascot around her neck. Meanwhile, Luna La styles the ittiest-bittiest of navy mini skirts with a button-front white top, block heels with gray mid-calf socks and a black velvet ribbon tied in a bow around her neck. 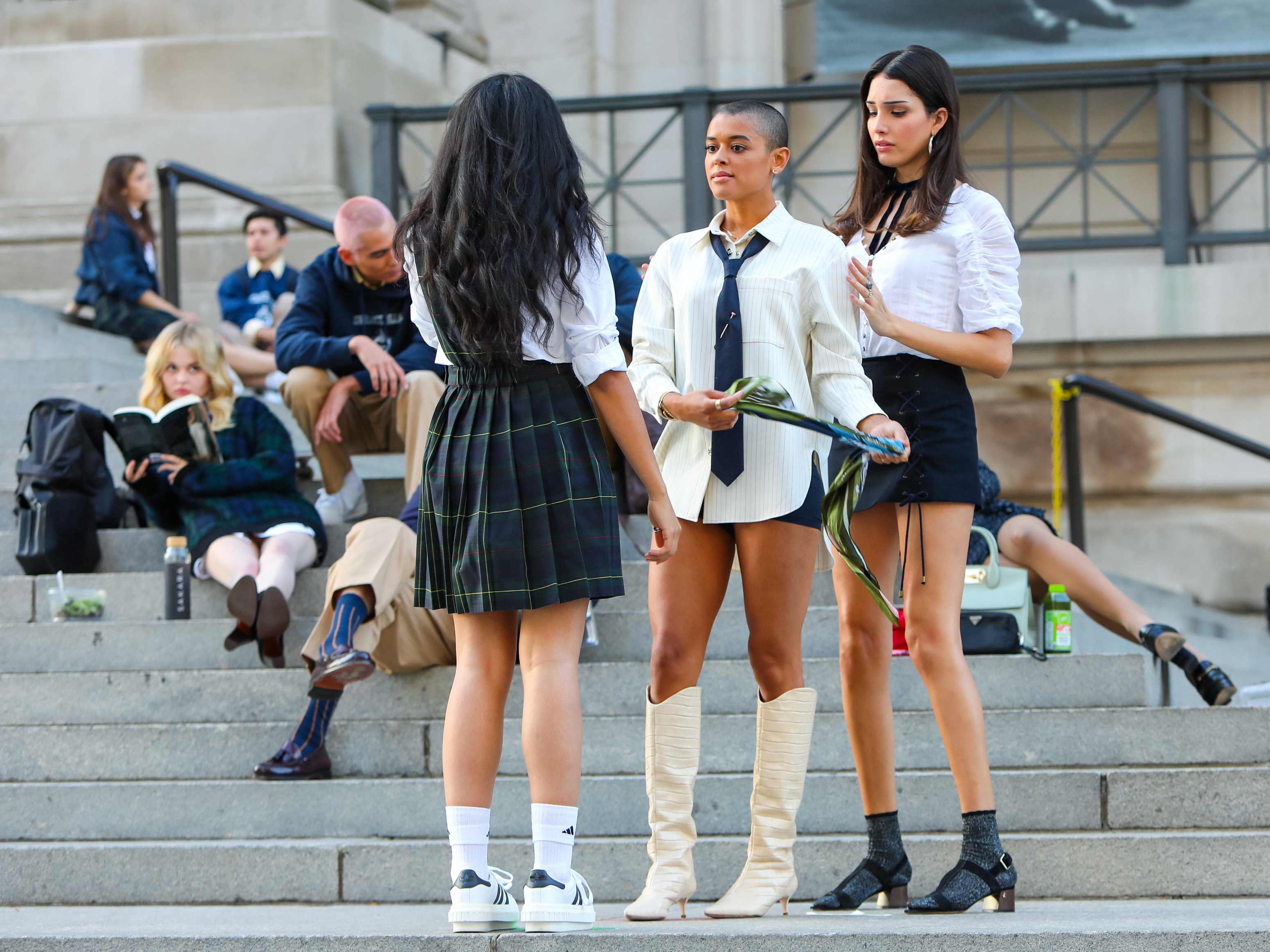 Julien Calloway (perhaps the character I’m most excited about) pairs an oversized pinstripe button-down with a loose tie, black spandex shorts and knee-high croc heeled cowboy boots, probably by Paris Texas. And in a moment that perhaps references the end of the old Gossip Girl aesthetic and the start of a new era, Julien “helps” new girl Zoya Lott look a bit cooler by removing the scarf she’s tied around her hair as a headband. Yep, you heard that right—this time around, the cool kids prefer to nix the headbands.

With just a few clips and the new trailer out now, it’s too soon to say for sure exactly what we can expect in terms of blossoming Gossip Girl reboot-inspired trends, but if I were you, I’d consider buying at least one plaid skirt you’re excited about. You know, just in case a spot on the Met steps frees up.