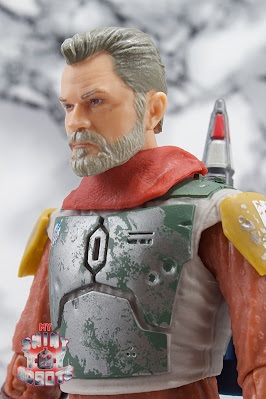 Release Date: February 2022
RRP: $31.99/£33.99
Although The Mandalorian has done a fantastic job of taking characters from the animated chapters of the Star Wars universe and bringing them into live-action, that isn't the only place the writers are drawing from. They're also drawing from the various comics, novels and video games that make up the current Star Wars canon - with perhaps the primary example being Cobb Vanth. Originally hailing from the Star Wars: Aftermath novels that lead into the sequel trilogy, Cobb Vanth was brought into season two of The Mandalorian as the marshal of Mos Pelgo, helping to keep the peace with the salvaged armour of feared bounty hunter Boba Fett. Not only did the arrival of a man in Fett's armour kickstart the lead up of Boba's return from the dead, but Cobb Vanth remained as a beloved character whose story carried through into The Book of Boba Fett and beyond. 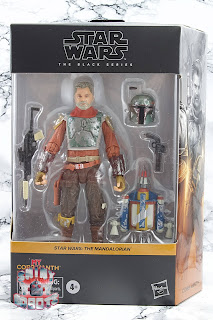 "The marshal of Mos Pelgo, a small town on Tatooine, Cobb Vanth has earned the trust of the townsfolk as a capable peacekeeper and leader."
To start the review off on a somewhat contentious note, Black Series Cobb Vanth has been released as a "deluxe" figure with a higher price point than normal. Looking at the figure itself and accessories it might seem a little confusing as to why, but the team at Hasbro have previously confirmed that this was due to the number of paint apps required for the figure - a point to be discussed further down in the review. For the meantime though this means he comes in a wider than usual box, but isn't discounted from The Mandalorian range of figures in any way and is still part of the connecting mural the spine of each box makes. Cobb Vanth is the 18th release in this particularly range, with his character artwork depicting him in Boba's armour with the helmet removed. The back of the box also sports a short character bio, though curiously lacking any information about him adopting the (presumed dead) bounty hunter's armour. Open it up and you'll find the figure and accessories neatly laid out across the plastic tray, making use of the space well even though there isn't really more here than you'd find in a standard release. 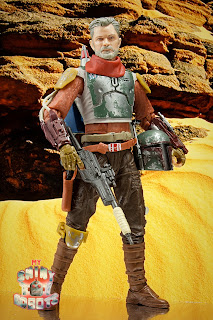 Black Series Cobb Vanth is predominantly a newly sculpted figure, however it naturally reuses some key elements of the Return of the Jedi Boba Fett figure such as the vest/body armour and arm gauntlets. Both however fit with the new sculpt brilliantly, and if you weren't any the wiser you'd probably think Hasbro had sculpted these parts all over again. The figure is based on Vanth's appearance in the premiere episode of The Mandalorian season two - the Mandalorian armour fitting over the top of his standard civilian clothing. The armour may be the draw for a lot of people here but Hasbro have done a brilliant job on this under-suit too - the shirt featuring a moulded texture pattern and the trousers plenty of patchy, fabric detailing. Around Vanth's neck is his signature red scarf, which loosely fits around the neck and doesn't impede on the articulation whatsoever. The head sculpt is a good likeness of the character/actor Timothy Olyphant, but perhaps goes a little heavy on the colour and thickness of the beard. Admittedly it probably isn't all that easy to convey Vanth's more wispy facial hair on a tiny plastic head, but the thick grey beard does make him look a little older than he actually is. Still, it's a really great looking figure and definitely ticks the box when it comes to conveying a character that may seem like Boba Fett but on closer inspection definitely isn't. However we then come back to the paint apps, which as previously said are supposedly the reason for this figure a deluxe release. Bearing in mind previous Boba Fett (as well as most Mandalorian) figures have been standard releases, it is a little difficult to see how Hasbro justify that statement. Admittedly there is A LOT more silver paint here which has been carefully (and in certain places, precisely) applied to show how much more battled damaged the armour has gotten, but most of the body itself is moulded in its colour. Ultimately this is largely down to the rising cost of figures so it's not easy to place a measure on it without knowing the factory specifics, but whether Cobb Vanth really has that much more too him than a lot of the fantastic looking regular releases deserves to come under scrutiny. 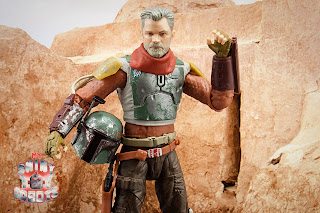 As collectors have come to expect from the line Cobb Vanth is a fairly well-articulated figure, sporting the following in total;
- Ball jointed head, neck, torso and hips
- Swivel hinge shoulders, elbows, wrists, knees and ankles
- Forearm and thigh swivels
This set up is fairly standard for Black Series figures since they entered their newest phase at the end of 2020, though elements like the forearm swivel are a little more unique. It's a shame that butterfly joints haven't really been widely implemented across the line yet because Vanth would really benefit from some to bring those arms out just in front of the fixed shoulder pads, but nevertheless you can still get a decent range of movement out of the arms. The aforementioned shoulder pads are made of soft plastic and raise up with the arms as you bring them up to sit straight with the shoulder line. As for the arms, thankfully there's a long enough stretch of cables between the shoulder and gauntlet for the arm to bend properly without fear of anything snapping. Though the swivel hinge joints can often break the sculpt around the elbows and knees they actually work quite well here thanks to Vanth's clothing, which helps keep their shape nicely. Overall though it's nothing out of the ordinary for the Black Series it isn't anything below par either, so you're able to get plenty of great gunslinger poses out of the figure without any hassle. 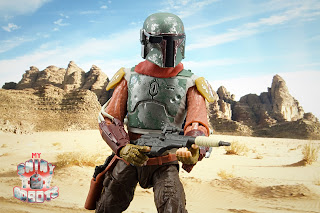 While paint apps may be what Hasbro say have caused Cobb Vanth's deluxe price status, naturally collectors are going to be looking at what's been packed into that larger-than-normal box for extra justification. Unfortunately they aren't going to find it here, nor with any of the other "deluxe" figures that have been announced in the last few months or so. Altogether Cobb Vanth comes packaged with Boba Fett's helmet and jetpack, along with his own HF-94 heavy blaster pistol and KA74 blaster rifle. This is perhaps the one time that Hasbro could feasibly get away with calling the helmet and jetpack accessories rather than part of the core figure, but since this is still a toy of Cobb Vanth specifically in Boba's armour then even then it would be a stretch. Both pieces have been carried over from the Return of the Jedi deluxe Boba Fett, with this marking the first time the helmet is a removable piece rather than being glued onto a moulded clone head. Both have had additional bits of silver paint to look even more battle worn, with the jetpack also getting a silver block of paint applied in the middle to mark the repairs that were made to it. Both fit nicely and snugly on the figure, although the helmet has that perfect oversized look to make it feel like it wasn't built for Vanth. Both weapons are moulded in black plastic with plenty of surface detailing, and the rifle even has additional painted bandage wrap around the barrel and grip. When not in use, the pistol can be stored in the belt holster for that complete space cowboy look. 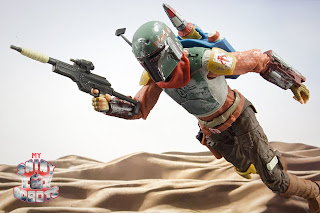 The helmet sports a moveable range finder like the majority of Mandalorian helmets on current Black Series figures, but the jetpack also has its own little gimmick - the rocket tip can be removed from the top as though it has been launched for attack. Granted this is a cool little feature for the figure to have, but it's one area where that deluxe price status could have been used to bolster the figure even more. Taking the rocket out is fun, but there's not really any proper way to pose it mid-air. With so many Hasbro figures coming with effect parts these days (admittedly the Black Series less so than others), how great would it have been to get a smoke effect part akin to the one included with the new S.H. Figuarts Boba Fett release? While there are already a lot of newly moulded pieces on the figure itself (as well as the weapons), an effect part like that would really stand out AND be ideal for future use on subsequent Boba Fett figures. As it stands, it doesn't really feel like you're getting that much for that deluxe price point here. Yes there's more paint here than there is on ROTJ Boba (and that doesn't have a unique head sculpt), but that figure comes with the jetpack, flame effects, rocket effects and two versions of his rifle. Even reusing those rocket effects would have been appreciated here! Not only does it seem very basic compared to deluxe figures that have come before it, and with the price of these figures rising it feels like the goalposts have shifted somewhat when it comes to what fans should be expecting from a "deluxe" figure. 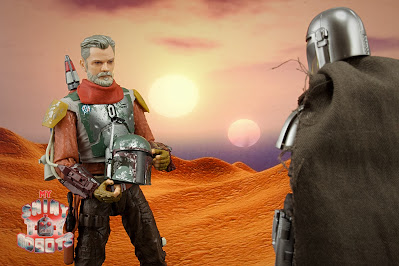 Black Series Cobb Vanth is another fantastic release that's hopefully a good sign for a strong string of Star Wars figures in 2022, but whether it does enough to justify being a deluxe figure is another question entirely. Hasbro can talk a good game about the amount of paint apps it has and there's no denying that prices are (unfortunately) going up, but stood next to some of the standard priced Black Series figures from the last few years and Vanth doesn't stand out THAT much. Throw in a few more accessories (even if they were just repacks from the deluxe Boba Fett) and it might not be an issue, but with nearly all the accessories being essential parts of the design you can't help but feel a little shortchanged by the price. Unfortunately though, looking at the rest of the deluxe figures announced for the rest of the year this is only the beginning - and. compared to some of them Cobb Vanth actually feels like he may be the best of the bunch.