Why Do Hummingbirds Hum?

Because they don't know the words.   Hahahahahahaha!  (I crack myself up.)

I was so excited this afternoon to see two Hummingbirds, a female and a male, visiting the nectar feeder.  I was even more excited to be able to take pictures with my camera and my phone.


The Orioles came today too but didn't sit still long enough to have their pictures taken.


But the coolest bird of the day was an Indigo Bunting that flew toward the feeders and then got scared off by an incoming sparrow.  I'll be keeping my eye out for another chance to see it.  I wonder what they like to eat... 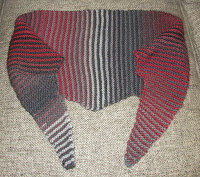 I finished the Baktus scarf today.  It's about six feet long and nice and squishy.  It'll be warm when winter winds blow again.


I did laundry today, five loads of it, including all of my flannel dresses in preparation for putting them away for the summer.  I carried winter things downstairs and summer things upstairs today even though it barely got to 60 degrees and was windy.  It's supposed to rain tomorrow so I sprinkled some high-nitrogen fertilizer on the bales and watered it in.  If it rains tomorrow I won't have to water again until Monday.  I emailed in my plant order and got an acknowledgement back so I should get my plants one day next week.  Then I can plant!


As Manning talked, Jack could not keep his eyes off the gold doubloon around Manning’s neck.  His fingers itched to touch it, to feel the centuries old gold and touch the aura of the conquistadors and buccaneers who sailed the Spanish Main, swords strapped to their sides and white sails billowing over head.  His eyes grew misty with a far away look as he imagined himself standing, legs apart, on a heaving deck as his ship plunged over the waves, canvas sails snapping above him and the hot tropical sun beating down.  A dreamy smile spread over his lips and he sat back in his chair as if he were in a hypnotic trance.
Manning kept talking, recognizing the effect his words were having on Jack.  When Yana came out to say that lunch was ready, Jack startled as if awakening from a sound sleep and he rubbed the back of his hand over his mouth as if afraid he had been drooling.
Over a meal of roast beef sandwiches, sliced tomatoes and cucumbers, and potato chips the men got down to the meat of the meeting.  Jack broached the subject of investing in a share in the treasure hunt; Manning sounded cautiously optimistic, almost trying to dissuade Jack from risking his money.
That one thing alone showed how good Manning was at luring someone into his scams.  If he had been too enthusiastic, too eager to relieve Jack of some of his money, Jack might have become cautious, might have stopped to think, have done a bit of research into Manning’s claims of past treasure hunting success.  But he didn’t.  Manning said all the right things that made Jack insistent, made Jack convince Manning to let him invest his money in the search.
“I don’t know, Jack,” Manning said, “I would hate for you to lose your money.  Maybe you should wait to see if we find something.”  He shook his head.  “I am sure that what Santiago and I found is a Spanish treasure galleon.  I’ve done some research in the archives in Seville and have retained an archivist who reads Old Spanish to search the records for me.”
His words only inflamed Jack’s desire to invest.  “Let me be a part of this, Manning.  I can afford to help.  Maybe you can hire a better researcher or maybe you and Santiago will need some equipment.  I can afford to risk a share’s worth.”
The pleading look in Jack’s eyes was like champagne to Manning.  He felt drunk with the power he had to excite a man to part with big chunks of his money on his words alone.  It was a heady feeling.  By the time the meal was finished, and they were relaxing with after lunch beers Jack was bemoaning the fact that it was Saturday and his bank in the States was closed.
Manning worked hard to be casual about it, saying that he had to get the paperwork for Jack to sign first, that he would not feel right taking Jack’s money without all the legal papers signed and sealed.  The last bit of tension drained from Jack’s body at those words.
That Manning was concerned about having the legal forms satisfied before taking his money, that Manning had absolutely refused to hurry the transaction made Jack feel like he was making a good investment--with his new best friend, Dax Manning.

I've had a hard time sticking to WW the last couple days and I'm glad that I can't just drive away and buy a big carton of ice cream with a side order of something like Fritos or Snyders of Hanover Honey Mustard & Onion Pretzel Bits.  Those things are temptation in a bag.  I can't stop eating them.  Good thing I finished the bag I had. ;-)  I'll climb back into the saddle tomorrow.
--Barbara
Back to News
Use left/right arrows to navigate the slideshow or swipe left/right if using a mobile device